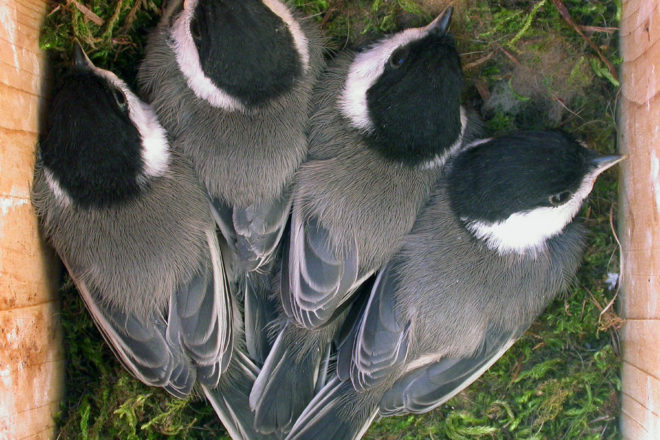 These four chickadees are ready to fly out of the box.

Many who enjoy the natural beauty of Door County are birdwatchers, or “birders.” We look for native species and know which territories each bird prefers, but we’re also excited to find unusual migrants.

Having a bluebird trail with 21 nest boxes set in habitats that attract these beautiful creatures causes me to make weekly checks to see which type of bird is using each box. Sometimes different species — tree swallows, house wrens, crested flycatchers or black-capped chickadees — occupy the boxes. These species are considered cavity nesters, which means they prefer to nest inside objects such as nest boxes or holes in standing trees.

All of the songbird species that nest in a box — except the chickadees — are migrants coming back from the South, and competition for the nest boxes can be quite fierce. Eastern bluebirds are usually the first to arrive, often by the middle of March, followed by tree swallows. House wrens show up a bit later. Males are always the first to return. They stake out a territory and then defend it.

Wild birds breed in a wide variety of habitats that are mostly determined by their food preferences. Waterfowl, naturally, nest near wetlands. Birds of prey such as hawks and owls choose woodlands or wood edges. Songbirds can nest on the ground, in shrubs, in trees or on buildings.

Typical cavity nesters include woodpeckers, nuthatches, wood ducks, kestrels, screech owls and purple martins. Some other species that are less familiar also use a cavity. These include bank swallows and kingfishers, which burrow into an earthen bank, often near water. Ducks such as the common goldeneye, common merganser and hooded merganser use tree cavities.

The species that most commonly use nest boxes are eastern bluebirds, tree swallows, black-capped chickadees and house wrens. These are the birds to which I devote this essay.

As you drive around the county, you may see nest boxes along country roads and even in some of the villages. It’s difficult to know which species are using them if they’re not opened and monitored weekly during the nesting season.

Some folks put up a nest box but do not conduct weekly checks. Therefore, they don’t know that there may be a nest, but perhaps a predator got in and killed the female that was sitting on eggs. Once that happens, no other bird will use the box until it’s cleaned, so it will go unused until it’s cleaned and made safe from predators.

Female bluebirds and swallows want a clean, empty box in which to build their nest. Setting bird boxes in areas that don’t normally have species that make use of them is a waste of time and resources. And if the box is placed on a wooden post that predators can easily climb, that spells death to the bird choosing that box.

I’ve given programs in the county about bluebird nest boxes for the past 14 years and always stress using the proper post or pole for the box. Many predators — including snakes, squirrels, feral cats, raccoons and opossums — will try to consume the birds or eggs inside the box. Field mice may also climb the post and get into the box to make a cozy winter abode.

When eastern bluebirds claim a box, they need one to three acres of primarily open land with short grass for ideal insect hunting. Bluebirds get all their food on the ground while tree swallows fly up to four miles from their box to catch their food in the air.

All songbirds must have an ample supply of insects to feed themselves and, most importantly, the young in the nest. Recent studies have revealed that insect numbers have decreased by about 25 percent during the past 30 years, and the vast amount of insecticide used in agriculture throughout the world is probably the reason.

Tree swallows use a nest box for only one brood and then are gone. I have a special tool that my late husband, Roy, made for me to clean and scrape out the insides of the boxes once the young have fledged. To leave a cleaner habitat, the adult birds of many species attempt to remove their chicks’ droppings, enclosed in a fecal sac, by carrying the droppings away. Tree swallows don’t seem to bother with that. They know they will not use the box again, so they tend to leave a very messy interior.

Swallows use slightly larger grasses than bluebirds for their nests and often place the cup in one corner of the box. Then the female adds a number of white feathers to the nest. Swallows’ breeding coincides with farmers plowing their fields, and many gulls follow the plows to grab the grubs and worms that the plowing brings to the surface. Therefore, it’s gull feathers that tree swallows use in their nests.

Bluebirds often have two broods — and sometimes three — during a summer, so they tend to maintain a cleaner box. We keep records of when eggs are laid, estimate the date of hatching and then predict when the young will leave the box so we can clean it before the female begins another nest.

One important facet of positioning for a bluebird box is to place it with the opening facing a medium or large tree that’s 25 to 100 feet away. Bluebirds that are ready to leave the box to take their maiden flight must land in a tree so the parents can feed them. Their wing muscles are not yet strong enough to fly straight up to a branch if they land on the ground, so they will perish if they don’t reach a nearby tree.

Black-capped chickadees use great quantities of moss to make a bottom nest layer that’s an inch or more thick. Then they add fine grasses and, finally, bits of animal hair to line the nest cup. The first box of chickadees we found had nine tiny, speckled eggs, and they all hatched and fledged.

House wrens also build nests in a nest box and can sometimes be a deterrent to other species. The male wren arrives before the female and stuffs twigs into every box in his territory. When the female chooses her box, she takes out some of the twigs and makes a grass nest in the middle. Meanwhile, all the other boxes stay full of twigs, keeping other birds out.

House wrens prefer habitats with more trees and shrubs, so that’s why placing nest boxes in this type of landscape is not good for bluebirds. We’ve seen bluebird nests in areas like this that had a few eggs with holes poked into them by wrens to deter the bluebirds. House wrens often do not make good neighbors for bluebirds, but they are a protected species and do a lot of good in harvesting noxious insects.

I remember a nest box on our land in which we found a snake skin. Roy knew immediately that it was the work of a crested flycatcher — birds that are more often heard than seen. Their high-pitched “weep-weep” call is distinctive. They spend more time in the upper canopy of woodlands and like edges and openings where they can swoop out to catch insects.

Try to help our native birds that use nest boxes by placing them in the right habitat, monitoring them weekly and keeping them safe from predators. Bluebirds will appreciate your efforts, and you will be rewarded by knowing that you’re helping these creatures to thrive.