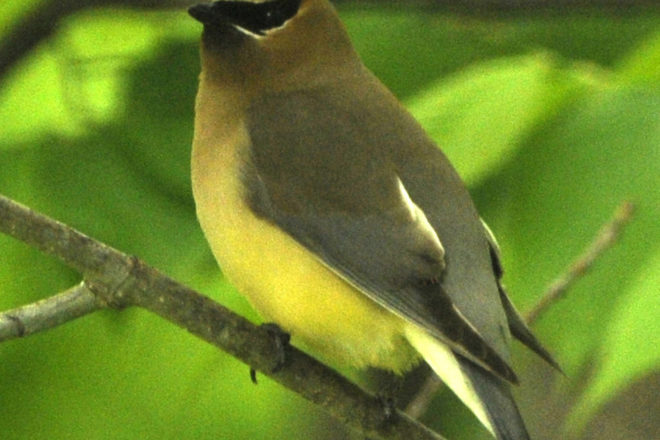 A first-year cedar waxwing has no red on its wings. The red coloring develops in the bird’s second and third year. Photos by Roy Lukes.

It is the end of June as I begin writing this and for the past three days I have been seeing cedar waxwings eating the fruits on the serviceberry trees in my front yard. The tart cherry orchard trees are beginning to show red color.

Roy often referred to these sleek creatures as “cherry birds.” On July 1 I noticed a male rose-breasted grosbeak and a male scarlet tanager also eating the serviceberries. Then a female indigo bunting and female flicker joined them.

I remember seeing cedar waxwings catching insects on the wing like flycatchers do. They displayed their great aerial skill as they swept upward on strong wings, as though entering an aeronautical stall, hovering at precisely the right spot, and then effortlessly snatching an insect in midair. 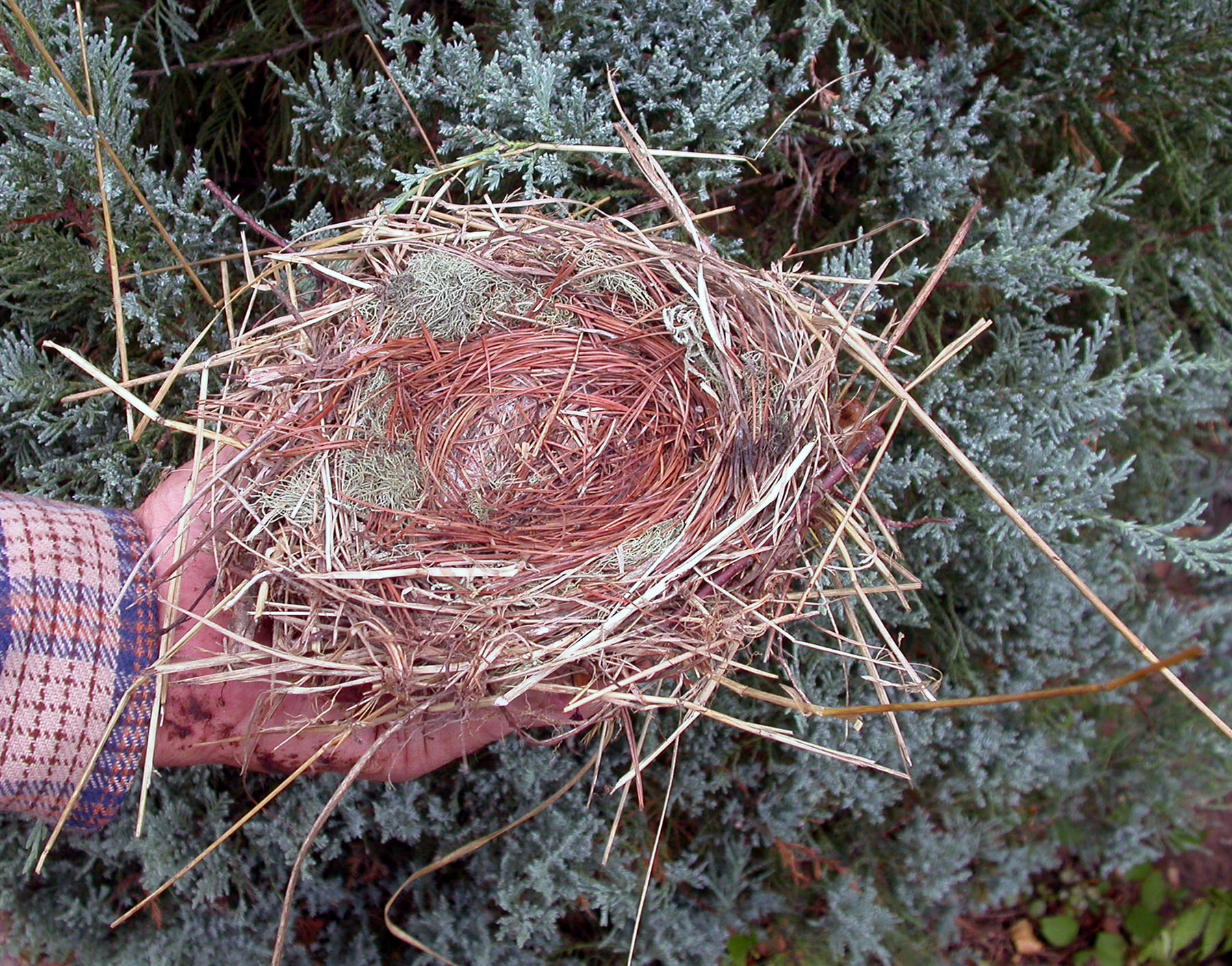 This cedar waxwing nest is made of quite a variety of grasses, weed stems and pine needles.

These silky-looking crested nomads nest in more backyards than most people realize. Perhaps it is their poorly developed voice, their quietness, which helps to conceal them so well. On the other hand their bulky, easy-to-see nest enables one to study the rearing of their young.

Tiny bright red wax-like extensions on the tips of some of their secondary wing feathers gave these gentle birds their name. It is thought that these sturdy tips help to protect the feather ends. This possibility could be of considerable importance, for this bird spends so much of its time in shrubs and trees in search of food. The very young birds usually don’t have the red. It takes a year or two for them to develop.

Plumage feathers appear very smooth with a brown back fading to gray rump, medium-brown crest and neck, which is quite thick. A black mask goes from the beak, surrounds the eye and runs narrowly to the back of the neck under the crest. The chin is black as is the beak. The breast is a paler brown changing to a light yellow belly.

The upper parts of the wings are a medium brown and the primaries and secondary feathers are gray to nearly black. The wings have no white or yellow marks like the Bohemian waxwing does. Another feature different from its Bohemian cousin is the undertail coverts. They are white. The Bohemian has rusty brown feathers under the tail. The gray on the rump joins black on the tail feathers which all have bright yellow tips. 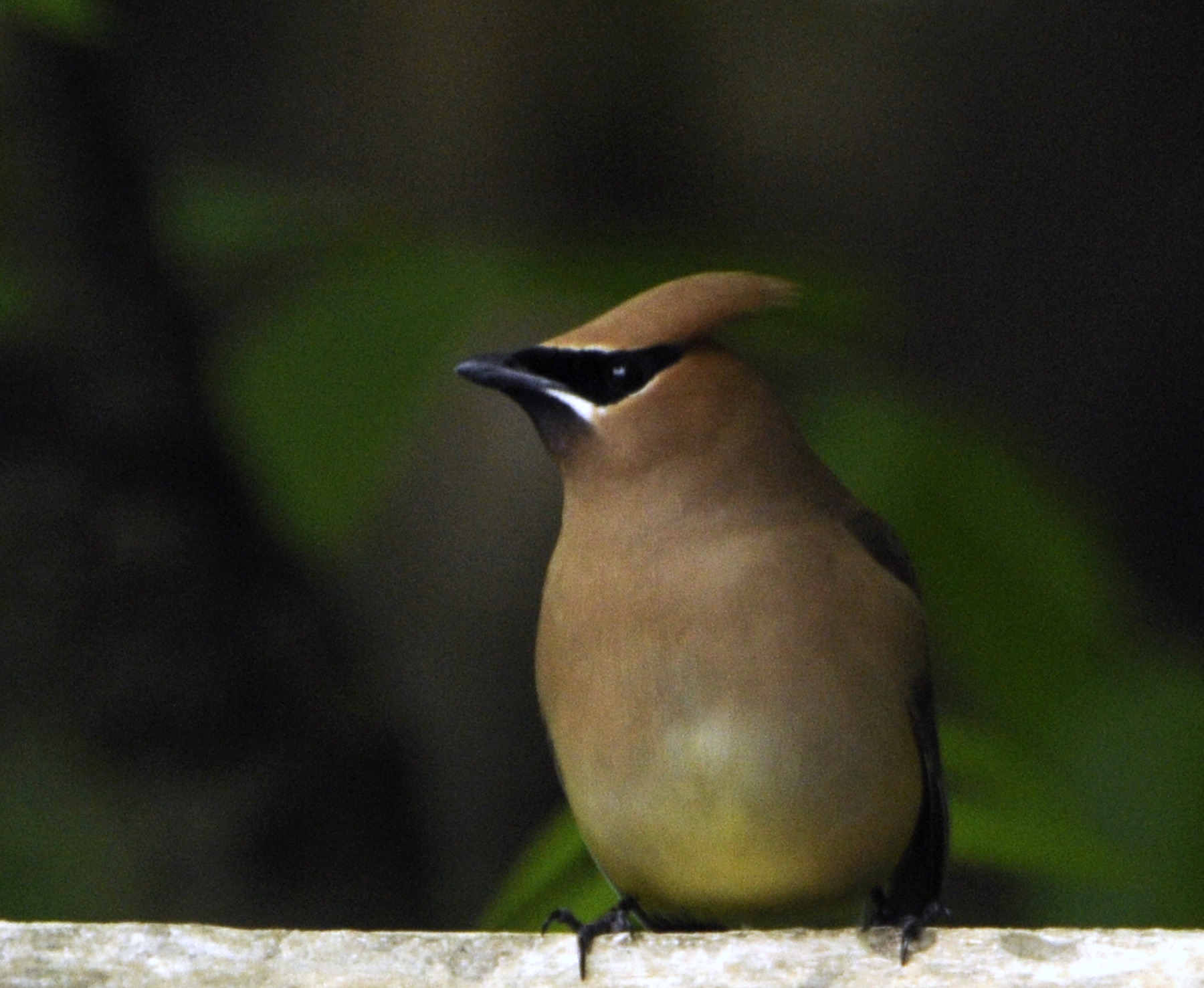 The black mask on this cedar waxwing has a distinct white edge.

Cedar waxwings are very social, migrating in large flocks and often sharing food with each other. Their nesting range is from southeast Alaska to Newfoundland south to northern California and northern Georgia. They spend the winter in the southern states and as far south as central Panama.

Their diet consists of many insects including cankerworms which invade apples, plus many kinds of fruits and berries. I remember seeing these birds sharing the individual petals of flowering crabapple trees. Signs of courtship is this sharing of flower petals back and forth, beak rubbing and the female “dancing.”

They are late nesters in the north, often not starting until July, perhaps due to their heavy reliance on fruit. Insects are fed to the newly hatched but fruits and berries are brought in to the young before they even leave the nest. About 70 percent of their diet is fruit.

They may nest with other cedar waxwings in loose colonies. Both the male and the female work at nest building, taking about five to seven days. Orchards, open woods and shade trees are preferred and the nest is placed usually on a horizontal branch 4 to 50 feet above the ground. They often like to be near water. It is constructed with loosely woven grasses, weed stems, twigs, yarn or string and lined with rootlets, plant down, fine grasses and sometimes animal hair. It measures five to six inches wide on the outside with an interior diameter of about 2½-3 inches.

Two to six, more commonly three to five, eggs are laid. They are blue-gray in color and are dotted with brown or black. Incubation is done by the female during a period of 12 to 14 days and is often started before the last egg is laid. The male feeds the female while she stays on the eggs.

Young stay in the nest for about 16 days being fed by both parents. Studies have revealed that fruit fed to the young passes through their digestive system in as little as 16 hours!

During the summer we were having our house built out in the middle of the peninsula we would frequently see cedar waxwings. One day we came home to the Ridges Rangelight and there was a box with one cedar waxwing inside, which was quite well-feathered already, begging for food at the top of its high, lispy, squeaky voice.

We named it “Squeaky” and soon it was capable of short flights to the top of our back door shelter. Bits of red worms, insects and small caterpillars, serviceberries, pin cherries, along with bits of strawberries and bananas appeared to satisfy its appetite very well.

Finally it was beginning to take food by itself rather than from the blunt end of a toothpick. Eventually Roy took it out to our country woods and released it near a flock of other cedar waxwings in an area where many fruit trees provided food. By then its stubby tail was already showing yellow at the tips of the feathers.

Its voice was so high that you had to be right next to the bird to hear it. Roy’s hearing, especially the higher pitched sounds, was damaged while he served in the U.S. Army, working with the atomic cannon during the Korean conflict, so hearing Squeaky was nearly impossible. The typical cedar waxwing song is actually just a call, like a very high-pitched “zeeee.”

It is interesting that cowbird predation on cedar waxwings is usually not very successful. The female waxwing will eject the foreign egg, damage the cowbird egg or just abandon the nest.

It is generally agreed that as long as wild fruit exists the cedar waxwings will prefer those to cultivated fruit. Include as many wild fruit trees and shrubs, ornamental crabs, elderberries and mulberries in your landscaping plan and for sure a flock of these exquisite sleek birds will drop in to surprise you several times each year. That will be a mighty handsome and entertaining reward for your work.