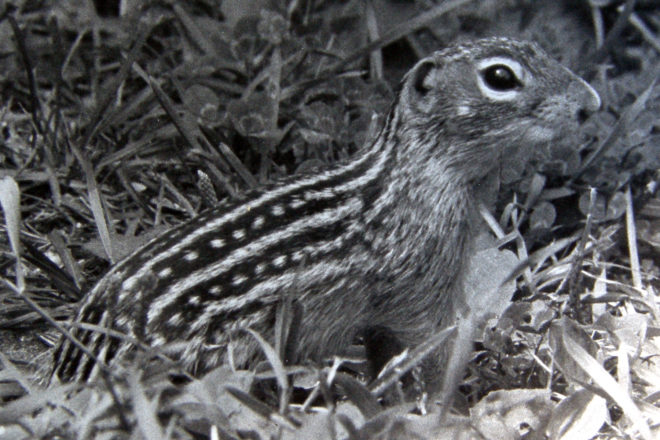 The thirteen-lined spermophile is also called a gopher. Photo by Roy Lukes.

One of the most favored foods I put out for the birds and animals is hulled peanut halves. A 20-pound bag is expensive but I put out just one big handful per day and it can last a long time.

The blue jays will snarf up as many as possible in one visit so I place most of them in the small under-shelf of the big platform feeder. There, the nuthatches and chickadees can easily sneak in and carry one off at a time.

When I scatter cracked corn on the ground sometimes a few peanuts get mixed in and the squirrels and chipmunks are most happy to find them. Last summer I found one chipmunk that would come right up to my feet looking for a peanut. This year it is back in the yard. There is another chippie feeding here, too, but it is not as friendly.

I have a Leopold bench on the front porch and it is a good place to observe birds and wildlife when I am very still and quiet. That is where I sit with a handful of peanuts and drop a few onto the cement walk. I talk to the chipmunk and it gathers up the fallen treasure and will even climb up right next to me to get more nuts. 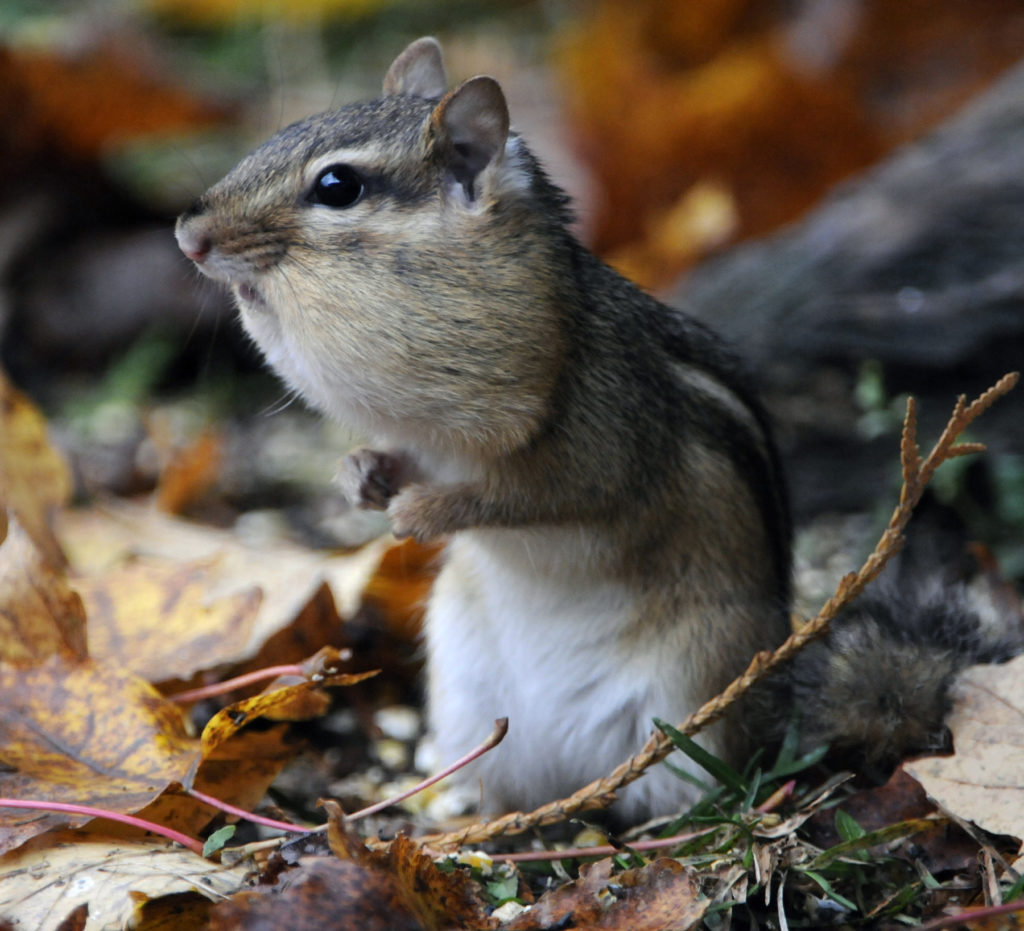 A chipmunk can pack quite a load of seeds or nuts into its cheek pouches. Photo by Roy Lukes.

Years ago Roy had wanted to create a little refuge near the edge of our garage so that we could view it from our dining room window. The structure would provide hiding places for the small animals and offer occasional entertainment for us.

It would have been similar to the old wood pile stacked next to the east wall of the wood shed at the Ridges Range Light Residence. It was four feet high and eight feet long. Chunks of white spruce that were about 15 inches long were piled in a way that many of the spaces between the pieces of wood were large enough for the small animals to crawl into.

The 13-lined spermophile, also referred to as the gopher or ground squirrel (one of several species in the U.S.), used the wood pile mainly as a temporary retreat. It frequently hid there when suddenly scared from its sunflower feasting place beneath the feeders.

People often confuse the gopher with the chipmunk. They are quite similar in size but vary considerably in body shape, color pattern and mannerisms. If the animal scampers away from you with its tail parallel to the ground it most likely is a gopher. Chipmunks invariably carry theirs vertically during their speedy get-away. Gophers have no stripes on their cheeks, as do chipmunks. The chipmunk’s back has a narrow dark brown stripe down the center bordered with two wide gray-brown stripes and a narrow buffy stripe on each side of those bands.

A gopher does have 13 pale buff stripes and 12 dark stripes running down its back. Five of the lighter stripes are actually a series of buffy dots. This striking pattern of light and dark stripes and spots provides this vulnerable mammal with camouflage against its many natural enemies including the fox, badger, weasel, house cat, northern harrier and snake. Harriers with their superb sight and badgers with their extraordinary digging powers prey upon them quite heavily.

Gophers may appear to have bodies that are more than six or seven inches long. When standing upright on their short hind legs and stretching their “stripes” as long as possible they lead one to exaggerate in describing their total length which is no more than eleven inches from the tip of their nose to the end of their 4½-inch-long tail. 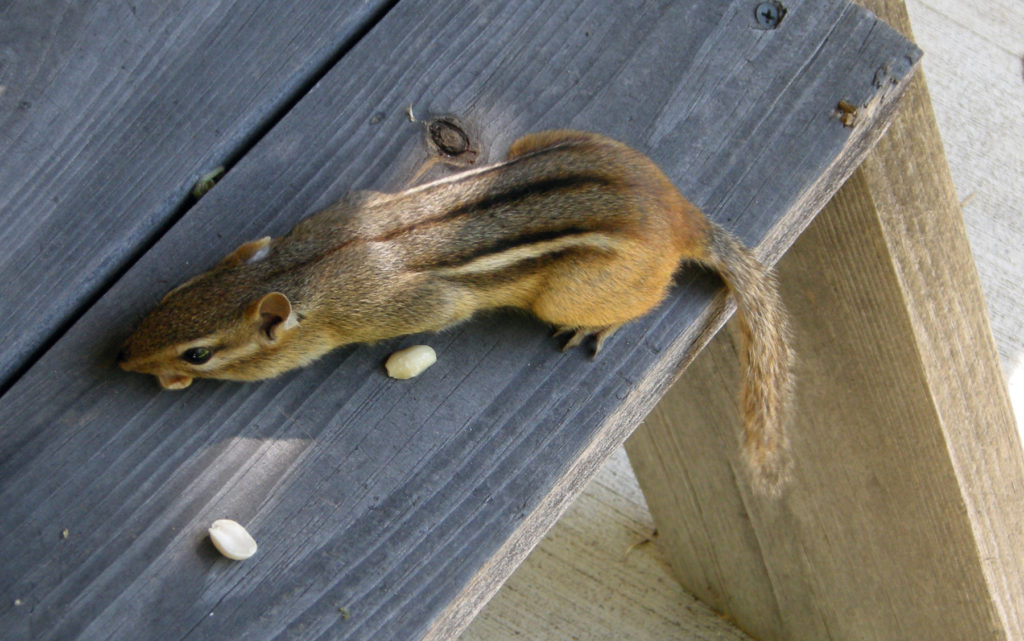 This friendly chipmunk comes onto the bench to get peanut halves. Photo by Charlotte Lukes.

Its narrow conical-shaped head is somewhat smaller than a chipmunk’s and it has less storage space in its cheek pouches. After careful counting, a naturalist observed that one chipmunk could carry the following loads (obviously not together):  145 grains of wheat, 31 kernels of field corn, 13 prune pits, 7 large acorns or 32 beechnuts! A gopher could never match that feat.

The gopher has very small ears and conspicuous light eye rings. The claws on the four toes of its forefeet are quite long while those on its hind toes are short and strong.

Their diet consists mostly of animal matter supplemented with seeds, grain, berries and nuts. Grasshoppers, June beetles, cutworms and crickets are among their favorite foods. Because of their long hibernation they generally do not harm stored crops. However, they are known to do some damage to certain grains such as very young corn as well as garden vegetables, including beets, peas, beans and melons.

Our best guess is that gophers inhabiting this cold lakeshore region near the 45th parallel spend about five months above ground and seven months below the ground in hibernation. My first sighting of one this year was on April 30, a bit later than usual due to the cold snowy month. Late September into the middle of October is about as late as we have observed them here. This comes out to about five-and-a-half months above ground.

Their body temperature in summer reaches to around 105 degrees F. while their heart rate can go up to as many as 400 beats per minute. Come winter their body temperature is reduced to a few degrees above freezing and their heartbeat drops to as low as five or less per minute. Fat accumulated during the summer months, when their weight doubles from May to September, is slowly burned, thereby supplying them with the very small amount of energy they need to remain alive.

These rather unsociable gophers have one annual litter of around nine young. The adult female has 10 mammae. Babies develop rapidly and are fully grown by three months, living to as much as five years.

Get to know these small, quick-moving mammals and enjoy their antics, as long as they don’t get into your garden and eat the veggies you hope to harvest!