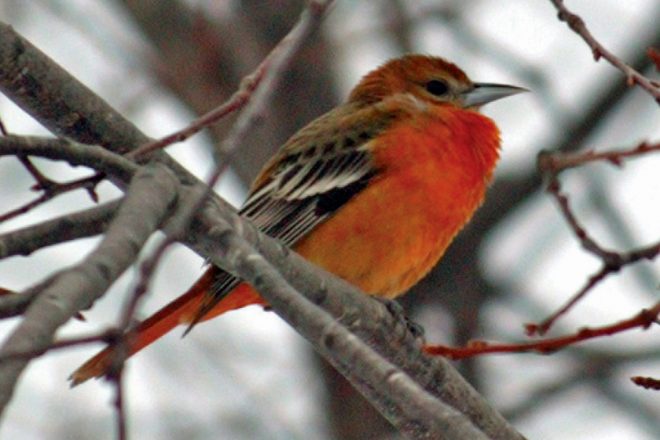 An unusual red-pigmented Baltimore oriole showed up during a Sturgeon Bay Christmas count many years ago. Submitted.

Interested in helping with the two upcoming bird counts?
Email [email protected] and use the subject line, “Connect with Charlotte Lukes.”

This is the time of year when we begin organizing the annual Christmas bird counts. The Sturgeon Bay count will take place all day Saturday, Dec. 18, and the Southern Door count will follow on Sunday, Dec. 19. Both have been run since 1996.

A season with mild temperatures and little snow cover makes it easy for birds to find food, so they consume many weed seeds and insect eggs from plants and trees. These conditions frustrate people doing feeder counts because few birds find it necessary to take the handouts, and we get complaints that there were “no birds” at the feeders.

A lack of snow on the ground also makes it more challenging for the teams of birders who search open fields and roadsides because the birds often blend in with the drab ground and are hard to see. We also don’t like strong winds on count days because wind makes it difficult to hear birds, and many may seek shelter from the gusts by hiding in shrubs and tall grasses.

A ground cover of a few inches of snow really helps field counters to see birds as they swoop over the countryside in search of food and shelter, and deep snow is ideal for getting more birds to visit feeders because much of their natural food is hidden.

Every autumn, Wisconsin birders can get the forecast of finches and other far-northern breeders that are migrating down to our state. When seed supplies on trees in Canada are scarce, the birds fly south to seek enough food to sustain them through the cold months.

A bird that breeds down south is the Carolina wren, but on many occasions, we have seen one in Door County and, strangely, mostly during the winter while visiting suet feeders. This past year, there may have been one living in our county all summer. Two other species that are uncommon but have been seen here are the Townsend’s solitaire and varied thrush. Both breed in the far western mountains.

We are fortunate to have two brothers who drive to Door County from neighboring states to help with both of the area bird counts. They work hard at searching out and listening for unusual birds, and they start before dawn to find owls calling. They often hear the eastern screech owl, which may be more common here than we think. It’s a small owl with a distinctive call – a call that may alert a nearby great horned owl, which is its predator.

We encourage more people to participate in these counts by contacting the coordinator to learn how they can help. The data that participants collect goes to the National Audubon Society and is available to researchers who study birds, habitats and migration patterns. The future of wild birds is being affected by global climate change, and we may be able to help mitigate these conditions if we learn more about winter populations in various parts of the country.