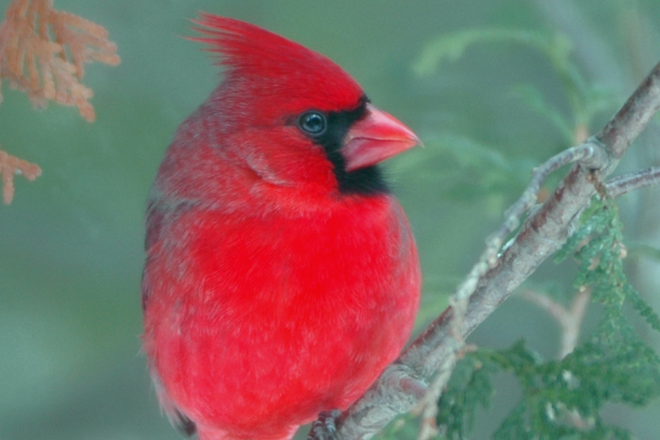 This male cardinal shows off his vibrant plumage in a cedar tree. Photo by Roy Lukes.

Every year, the National Audubon Society runs Christmas bird counts: citizen-science events that take place throughout the North American continent. Each is a 24-hour effort on one chosen day from Dec. 14 to Jan. 5.

The two counts that I organize are for the Sturgeon Bay circle and the Southern Door circle, which is called the Brussels count. The specific count area is a 15-mile-diameter circle.

The first thing I do each November is contact all the past field workers to see whether they can help again this year. Once I know who will help, I assign each group a zone within the count circle. Most field-party groups get the same zone each year, so they know what to expect. They are familiar with the habitats and remember where certain unusual species were seen in past years.

This year, the Sturgeon Bay circle had 11 field-party groups scanning the roadsides and woodland edges in search of hawks, sparrows, snow buntings and various open-country species. The Brussels count had eight field parties covering that circle.

The Sturgeon Bay circle is centered in Institute at the junction of Highway 57 and County P. The northern edge reaches Jacksonport and near Egg Harbor, just south of Horseshoe Bay Road. The southern edge is just west of Potawatomi State Park, down to Lake Lane east of County U, to the lakeshore.

The Brussels circle center is at the junction of County DK and Stevenson Pier Road. The northern edge is at Snake Island, and the southern edge goes into Kewaunee County for about a mile. The eastern edge is about a half mile east of County S, and the western edge is close to Chaudoir’s Dock west of Namur.

It is valuable to stay within each zone so as to not overcount certain species. In fact, if an unusual species such as a snowy owl is seen near the edge of a zone, we ask the observer to write exactly where and when the bird was seen. If the adjoining group sees the same species nearby at about the same time, we know it was probably the same bird.

Once the field-party groups are set, I send maps to the groups’ compilers. Recording forms, set by the National Audubon Society, are also sent to each group, along with a rare-bird report form. Sightings of certain rare species require detailed written documentation to be accepted into the count records.

The next job is to contact those who count birds at their feeders and in their yard and send them report forms.

Count week begins three days before the count day and continues for three days after. If any bird species is seen during the count week but not on the actual count day, it’s recorded.

This year, as a total for both days, we had about 27 people doing field counting and 35 homes doing feeder counts. Fortunately, there were 10 field workers who did counts on both days.

One of the field parties consists of two brothers – Darrin and Kevin – who are excellent birders and really work hard at finding as many species as they can. Their day begins in the dark as they play recordings to listen for owls. This year may be a record year, with the northern saw-whet owl and barred owl showing up on both days, as well as an eastern screech owl on one day. Great horned owls are usually the most common and are an expected find.

Darrin and Kevin come here from Minneapolis and Evanston, Illinois, to do these counts, and we are so glad they participate. Each year that they help, we are very excited to see their final reports because they are so good at finding small songbirds hiding in swamps or marshes, as well as locating unusual waterfowl.

I have been organizing these annual events since 1972, the year when my late husband, Roy, and I were married. In those days, we did the Northern Door count, which was organized through The Ridges Sanctuary. I worked in a dental office in Sister Bay and learned who would watch birds at the feeders and then sign them up for the count.

This year is my 50th straight year of Christmas bird counts. It is always a special time for us to assess the population of birds and help in the conservation efforts of so many organizations that try to improve their habitats. I wish all of you happy birding!