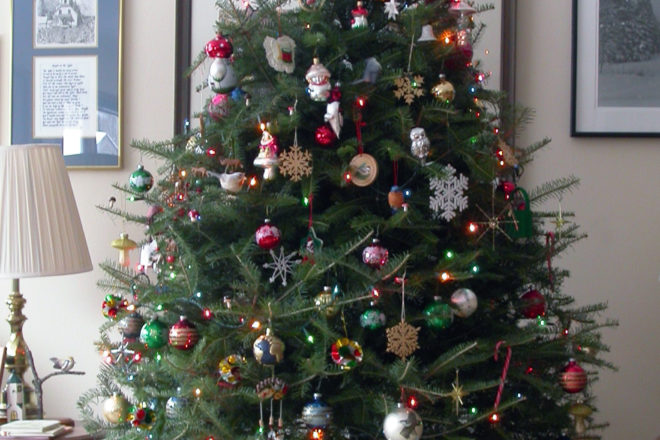 This is the time of year that Roy and I would look for a nice medium-sized natural tree to bring home and decorate for Christmas. Our schedule was such that, with organizing two Christmas bird counts and preparing the Door County autumn season final bird report, it often became mid-December before we had time to get a tree. By then many outdoor stands had few good trees left and they were usually covered with snow.

Roy and I were getting older so we decided to buy an artificial tree at a Sturgeon Bay store and not deal with the mess of the snow-covered natural tree. We found a moderately priced one that came apart in three sections and had strings of tiny colorful lights already attached to the branches. It was easier to deal with, but we missed the fragrance of our favorite balsam fir tree. A dear friend of ours who lives in Sturgeon Bay gifted us with balsam-scented candles. That thoughtful present was much appreciated and made the living room smell like we had a real tree.

There are many species of evergreens that have been used for Christmas trees. In 1997 we purchased a concolor fir, Abies concolor, also known as a white fir. It was grown in Door County but most are native to the mountains of the west. It had a nice shape and we liked the long, flat, round-tipped needles which emitted a delightful, spicy, citrus-like fragrance when crushed with your fingers. 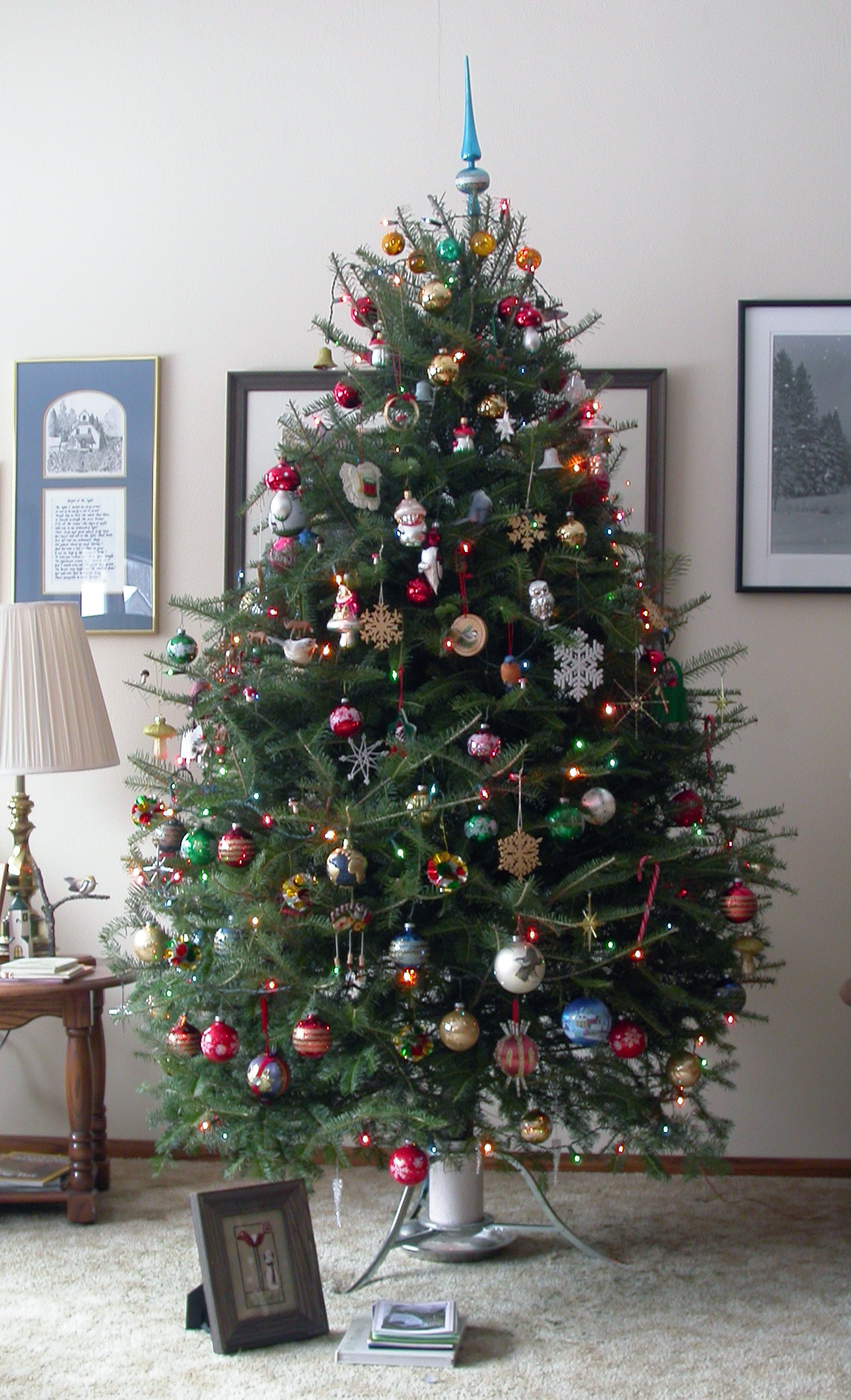 The balsam fir, Abies balsamea, (AYE-bee-eez ball-SAME-ee-a), native to our part of the country, has been a favorite and most popular Christmas tree. Its needles are rounded at the tip, not pointed and spiny, and they are flat and flexible. The fragrance says “Christmas” best of all. I have an old, cast-iron, wood cookstove in the kitchen/dining room and when I had a cozy fire going in it during the Yuletide season I would scatter a few balsam fir needles on the flat top. They would begin to sizzle and spin and as they became hot their wonderful scent would waft into the air.

Another fir receiving more notice and use in this region is the Fraser fir, Abies fraseri. It is native to the Appalachian Mountains. It can be found in eastern Tennessee and western North Carolina in mountains at elevations between 4,500 and 6,900 feet. We saw our first ones when we camped in the Great Smoky Mountains National Park in the mid-1970s. They are very similar to the balsam fir.

Several other firs are native to the western mountains. Those species are the grand, Pacific silver, bristlecone (not to be confused with the bristlecone pine), noble, California red and the subalpine fir, a beautifully shaped fir which we admired on our month-long western trip in the fall of 1993.

We tried a Douglas fir for a Christmas tree one time and found it to be quite picky to work with and to trim. The genus of this tree is Pseudotsuga (Soo-doe-SOO-ga), meaning false or fake hemlock. Hemlock trees have flat, round-tipped needles like the balsam, only shorter. The Douglas fir really doesn’t resemble a fir or hemlock at all, leading one to wonder how it ever got its scientific name.

Few people today would think of using a terribly prickly, somewhat rusty-colored (in winter) red cedar (Juniperus virginiana) for a Christmas tree, but depending on where you live, you make do with whatever is available near your home. The red cedar is actually a juniper and those who know the abundant shrub in the open fields of Door County, the common juniper, realize how spiny and sharp-pointed the needles are.

Like the red cedar, the arborvitae is not really a cedar tree. There are no true cedars, in the genus Cedrus, native to the North American continent. Unfortunately, someone years ago thought that our arborvitae trees resembled the cedars of Lebanon, which are the true cedars. Our eastern white cedar, which we call arborvitae, is in the genus Thuja (THOO-ya), an ancient name of some resin-bearing evergreen. Its species name is occidentalis (ok-si-den-TAY-lis) and simply refers to the Western world – our continent – where it was first discovered.

Our good friends, Mike and Barbara Madden, would traditionally have an arborvitae as their tree. It was very gentle to work with having smooth, flat, flexible, scale-like needles and an open branching making it easier to place certain ornaments. The tree has a rather pleasant odor as well and is abundant in our part of the state.

The name arborvitae originated in an interesting way. It is the latinized form of l’arbre de vie (“the tree of life”). King Francis I of France gave the tree its name upon learning that French explorers, led by Jacques Cartier, were quite magically cured of scurvy by drinking a vile tea brewed from its foliage which was given to them by the Native Americans of the St. Lawrence Valley. So l’arbre de vie was gradually transformed through the years to “arborvitae.”

A TV commercial running recently for a brand of car has the driver going into the mountains to cut down a tree with the following question asked: “Why bother to do that when you can get a little spruce from a corner tree lot?” Apparently the person who wrote that ad never tried to trim a spruce tree. Similar to the the red cedar and common juniper, spruce trees have very sharp, pointed needles and are not nice to decorate.

Fir trees rank near the top of the list of favorite trees used, especially indoors, in our region during the Christmas season. Their tall, smooth, tapering, narrow spires have been admired by millions of people on this continent for hundreds of years. Perhaps it is the intense, clean, outdoor fragrance that has also made them so popular.

Enjoy your Christmas tree to the fullest, regardless of the species you choose. I wish you all a wonderful Merry Christmas!