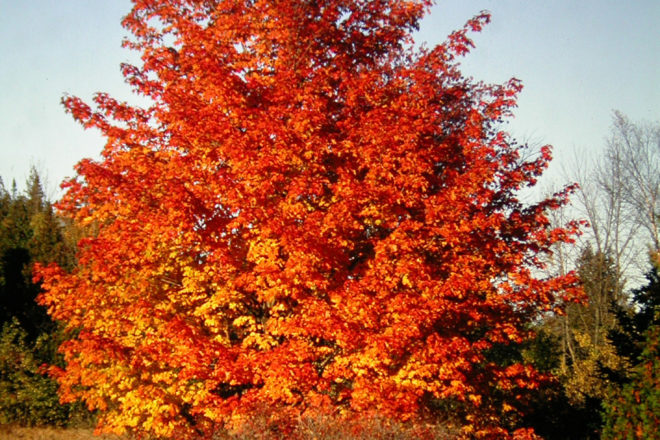 The cold wind and rain of Pumpkin Patch weekend blew the last leaves off the tall basswoods in my front yard. They’re usually the earliest species of our native broad-leaved trees to lose their leaves.

My late husband, Roy, and I kept phenology records for most of our married lives. Phenology is the study of natural occurrences that happen every year in the plant and animal world, and they’re usually related to climate. I noted that many natural events occurred about two weeks later than usual this past spring.

Many people living in Door County enjoy seeing the orchards in bloom. In May, we waited until Memorial Day for peak bloom, but during some springs, this would have happened in the middle of the month. Farmers also had to wait several weeks before their corn could be planted. When spring is late, we wonder whether the fall color will also be delayed by the same interval.

Some trees that are not in good health can come into fall color quite early because of stresses in their environment. Our records show that the peak of fall color in Door County can vary by as much as two weeks, from early October to the last week of the month.

The acronym CAT can help you remember the three chemical substances that are responsible for the flamboyant fall colors of many deciduous trees, especially in eastern North America. They are “C” for carotenoids (ca-ROT-e-noids), “A” for anthocyanins (an-tho-SY-a-nins) and “T” for tannins.

Many people believe that one or more hard frosts help to produce rich autumn leaf color, but the opposite is true. Frosts dull the colors and promote faster foliage drops.

Leaves, with the aid of chlorophyll, manufacture starches all summer through the chemical process of greatest importance to humankind: photosynthesis. Trees take in carbon dioxide from the air, nutrients and water from the soil, and sunlight. A continuous flow of water – more so during the day – takes place within the tree. As much as 200 to 300 gallons of pure water are given off into the air by one large deciduous tree in one day!

The yellow coloring – carotenoids – is in the leaves and is also responsible for the yellow color of corn, daffodils, egg yolks and the orange of carrots. We don’t see it in the summer, though, because the green chlorophyll masks it.

Along comes fall, and with it, fewer and fewer hours of daylight. The presence of growth regulators called auxins within the leaves prevent the leaves from falling off the trees during the summer, but by fall, a thin abscission layer – a separating substance made of corky cells – begins to form across the end of the leaf stem. This blocks much of the water flow into the leaf. Without water, photosynthesis stops, and the chlorophyll in the leaves slowly disintegrates, exposing the carotenoids that were there all the time.

The last important function of the tree’s leaves is to produce sugars, converted from starches, that can be stored by the tree to act as a reserve supply. The pigment anthocyanin now enters the story.

On nights when the air temperature falls below 45 degrees F, but not down to freezing, something occurs that prevents the sugars, produced during the day, from moving from the leaves into the tree. The following day – especially during dry, sunny weather – that blazing red pigment anthocyanin is produced in the leaves.

Here, then, are the conditions that tend to produce the most striking fall leaf colors: dry summers followed by early fall rains, which prevent the leaves from falling off too soon; cool, but not freezing nights; and sunny days. Dry weather favors anthocyanin formation because it hastens the transformation of leaf starches into sugars.

Exposure to sun is also important, so the edges of woods and the tops of tall trees reveal the brightest colors. Even trees growing near street lights tend to have brighter leaf color and retain their leaves longer because, with increased light, the abscission layer forms more slowly.

The anthocyanins produce an effect much like litmus paper, which turns red when it touches an acid and blue when it touches alkaline liquid. Consequently, an ash tree, which is alkaline, often has a plum-purple hue to its leaves while sugar maples, being acidic, produce striking reds.

Tannin, a waste product of trees such as white oaks and beeches, is a powerful astringent that causes leaf proteins to stiffen and turn brown.

Different combinations of soil chemicals, moisture, light and weather conditions produce variations of fall colors. Certain trees seem to show vivid colors every fall while others are strictly at the mercy of all the variables involved in this annual performance.

The crimson leaves are falling fast; the bloom of summer now is past. The cold north breeze, the dark clouds high, the scarlet trees, the wild geese fly – this is autumn’s cast.