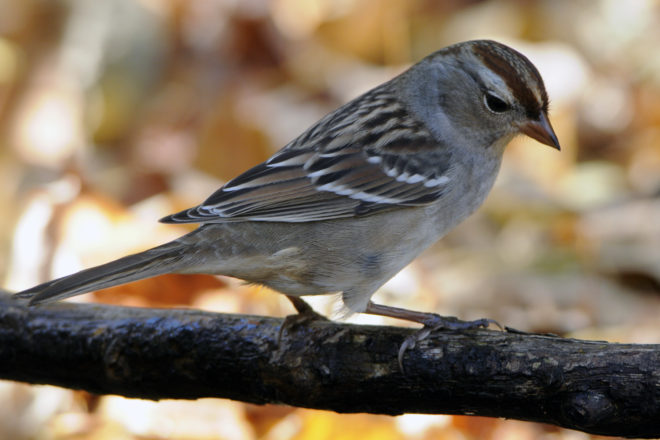 Birding friends of mine report warblers that they see passing through on their way south, and many were keeping track of the last hummingbirds to visit their feeders. Birdwatching at this time of year is a bit more challenging because, unlike during spring migrations, birds don’t usually have bright plumage, among other factors.

Most people don’t get very excited about seeing sparrows. Perhaps the first thing that comes to mind is the alien house sparrow, a species most birders don’t even include with the sparrows. (We consider them weaver finches, grouped in field guides next to the blackbirds and orioles, but not with the native sparrows.)

Late September into mid-October is an ideal time to get to know the white-crowned sparrow: a bird that does not nest in Wisconsin but does take a rather lingering migratory journey through Door County on its way to the central and southern states, where it spends the winter. It is quite common to see them feeding with white-throated sparrows in the yard. The white-throats do nest in parts of eastern Door County in the cedar swamps.

Here are a few field marks to watch for to help you distinguish between the two. The white-crowns that we see in our region tend to have a flesh-pink-colored bill and legs; the white-throat’s bill and legs are considerably darker. Both phases of white-throats have small yellow patches of feathers between the base of the beak and the eye, which are lacking on the white-crowns.

The white-crowned sparrows have two bold, very distinct black crown stripes, separated by a white median stripe. Adding to their white-and-black stripes are narrow, black eye lines that extend from each eye to the back of their nape. In effect, this bird has four black stripes – with the two in the center being widest and the eye lines being the thinnest – and three white stripes that make up their beautiful and striking head pattern.

Another easily seen feature of the white-crown is its pearl-gray face and breast. This bird also has a somewhat off-white throat patch, fading from gray surrounding plumage to whitish, which is not quite as elegant and outstanding as that of the white-phase white-throated sparrow.

As is quite common with other sparrow species, the white-crowned sparrows are sexually monomorphic: Males and females appear to be indistinguishable. One of the favorite poems of my late husband, Roy – which Harold Wilson wrote about chickadees – also applies to the sparrows: Here’s to the chickadee; / The sexes are alike, you see. / It’s hard to tell the she from he; / But he can tell … and so can she!

What’s so fascinating about the white-crowned sparrow is its wide distribution, from the Atlantic to the Pacific. It may be the most widely known and admired sparrow in North America. It breeds from Alaska and Manitoba east to Labrador and Newfoundland, and one can also find them nesting in western mountains clear southward to northern New Mexico and central California.

This unusually wide range accounts for several subspecies, which in turn have been of great interest to laboratory scientists, who have learned a tremendous amount about the physiology of bird migration in general from these subspecies.

They are common winter residents in parts of Arizona and the Pacific Northwest, where they can frequently be seen in pastures and parks, searching for insects and seeds, their primary food. They also breed at our same latitude in western Montana, Idaho and Washington.

If you travel northward from Wisconsin, you could find them nesting in the northern third of Ontario, clear up to the tundra and boreal forest along the southern shore of Hudson Bay. At higher elevations in the Rocky Mountains, they favor alpine meadows bordered by tall conifers.

Most often when we see these beautiful sparrows in the yard, they’re feeding on seeds that are scattered on the ground, especially near shrubs or evergreen cover where they can escape from predators in a split second.

The white-crowned sparrows favor brushy fence lines and roadsides during their migration and, if you’re lucky, you’ll see them at or under well-maintained feeders. I hope they will entertain you royally for the next several weeks.