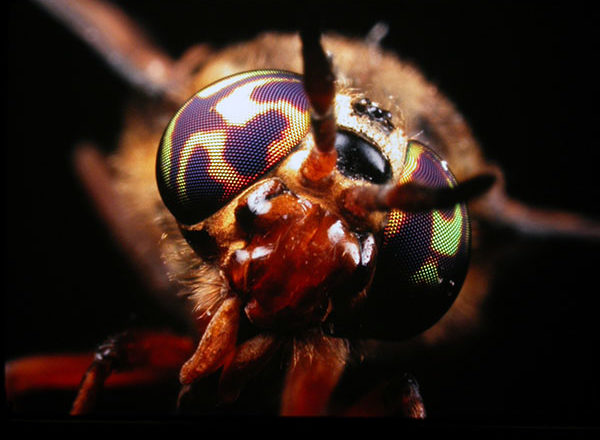 A deer fly eye is made up of many facets and colors as seen in a close view.

I was eager to learn about the birds and wildflowers of The Ridges Sanctuary when I married Roy Lukes 46 years ago and moved into the Range Light residence. As summer progressed it was fun being able to identify trees, shrubs and the animals in the area, but insects were just a bother and were getting in the way. My sentiment has changed through the years.

The attitude of many people toward insects generally is not good. Their feeling could very well be, “Insects bug me!” We understand little of the importance of some insects; for example, they play a primary role in the pollination of various fruit trees and other agricultural crops.

Thousands of animal food chains include insects. Many birds exist primarily upon them and about 90 percent of songbirds depend entirely on insects to feed their young. The number of insects that prey on other insects is very large. Indeed, without predacious insects we would be in deep trouble.

There are about one million different species of insects in the world that have been identified and nearly 90,000 in North America. Many are so tiny they go unnoticed. They are arthropods, in the phylum Arthropoda, which are invertebrates (lacking a backbone) having an exoskeleton (external skeleton), a segmented body and paired appendages. True insects differ from spiders in that insects have six legs and spiders have eight legs.

The black pine sawyer beetle has formidable jaws for chewing into tree bark.

A deer fly eye is made up of many facets and colors as seen in a close view.

These glistening green tiger beetles are mating on the soil.

There are several species of praying mantis, either green or brown, like this one on Charlotte’s shoulder.

This red-legged locust can leap in great bounds.

A destructive imported pest is the Japanese beetle which chews leaves of many plant species.

The beautiful cecropia moth is the largest insect in America.

This shield-backed katydid almost appears like a metallic creature from outer space.

Unfortunately, common interests of people and many insects overlap. For example, take farm, orchard and garden crops. One can list dozens of insects or their larvae eating the very things you are hoping to harvest. Sadly, using synthetic pesticides can kill as many or more beneficial insects as harmful species.

Roy and I had a large vegetable garden for many years and it was a constant battle to fend off the invading insects. Cabbage loopers, corn earworms and potato beetles were some of the worst. We used biologic controls and I put on latex gloves to squash the eggs laid by potato beetles on the undersides of the leaves. We finally quit growing potatoes and just bought them at the store.

Not every insect should be called a bug. Bugs are just one group of insects. The main difference is in the wings and mouthparts. True bugs have four wings that are membranous and fold flat over the back and have sucking mouthparts. Beetles have chewing mouthparts and their forewings are shell-like or leathery and the hindwings, used for flying, are membranous, longer and usually folded beneath the forewings. The well-known ladybug is really a beetle.

Explore the field of entomology and you’ll find that beetles in the order Coleoptera (co-lee-OP-ter-a) comprise around 40 percent of all animals on Earth, easily the largest of all orders. It was Oliver Wendell Holmes who said, “No man can truly be called an entomologist, sir; the subject is too vast for any single human intelligence to grasp.”

There are many insects that have colorful and sometimes glistening bodies. A favorite is the tiger beetle. It is a metallic green and often prefers to be on the ground in open areas. There are about 147 different species of tiger beetles in North America with some species considered to be critically endangered. They are harmless but can inflict a bite if mishandled. Another shiny beetle is a major problem, the Japanese beetle. It feeds on the leaves of 200 to 300 different plants. The actual adult beetle lives only about 30 to 45 days but larvae live longer underground eating plant roots mainly of grasses.

The body parts of insects are composed of the head, thorax and abdomen. Antennae on the front of the head are important sensory organs which can help the insect feel, smell, hear or taste. Compound eyes have facets, each one seeing only a small part of the entire view. Those creatures living underground have few facets but dragonflies have eyes with up to 50,000 facets, giving them phenomenal ability to detect the smallest amount of motion. The mouth can either be jaw-like for chewing or formed like a beak or tube, sometimes referred to as a stylet, for sucking.

One fascinating creature that Roy enjoyed photographing was the black pine sawyer beetle. It has antennae that are up to four inches long and a powerful chewing mouth. The adult’s body is about 1¼ inches long and can appear bronzy due to tiny brown hairs covering much of its exoskeleton. He found one at Toft Point when he hit one of the large old-growth white pines with the flat of his hand to show the firmness and good health of the tree. When he did that a black pine sawyer beetle fell from the bark to Roy’s feet. He picked it up to hold with both hands and show the group of hikers with him. These insects can inflict a painful bite, but Roy was lucky it was docile.

An interesting group is the order Orthoptera:  grasshoppers, katydids, mantids, walking sticks and crickets. They have chewing mouthparts and are distinguished by having two long folds in the back wings. Many can produce sounds by rubbing body parts together either to attract a female or to display distress. Except for the cicada, nearly all the insect musicians are straight-winged insects. In most parts of the world the word “locust” designates grasshoppers that migrate in swarms.

Look closely at a grasshopper poised to jump and you will notice that the angle formed between the femur and tibia is extremely small. Suddenly, like a spring under great tension, the angle is increased to nearly 180 degrees as the hopper literally explodes away from its resting place. A young red locust and other grasshoppers can catapult themselves a distance equal to about 20 times their body length.

Moths make up about 80 percent of the order Lepidoptera, the scale-winged insects, with butterflies in the remaining 20 percent. Approximately 765 species of butterflies have been named in the United States compared with more than 14,000 moths. The world’s fastest flying insect is one of the hawk moths, also known as a sphinx moth because of the manner in which the caterpillar rears up and somewhat resembles the famous Sphinx statue in Egypt.

The gorgeous cecropia moth is North America’s largest insect, at least of the more common species. Its colorful larvae are up to four inches in length. The caterpillars are usually not a problem because of the wide variety of host plants upon which they feed. Included are the apple tree, ash, beech, birch, elm, maple, poplar, white oak and willow.

Once the heat of summer sets in the butterflies can fly with ease. Most are immobile if the temperature is below 50 degrees. Last summer we enjoyed seeing more monarch butterflies than in the previous few years. Determine what native plants are good nectar sources and others that can serve as hosts for the larvae and grow them in your garden or yard.

Learn to appreciate our vast insect world and help to ensure the native species can survive and reproduce. Avoid using pesticides and try natural controls. Practice good stewardship and stress its importance to your children. The healthier and wilder one maintains the environment, the better our chances will be for native species and us to survive.