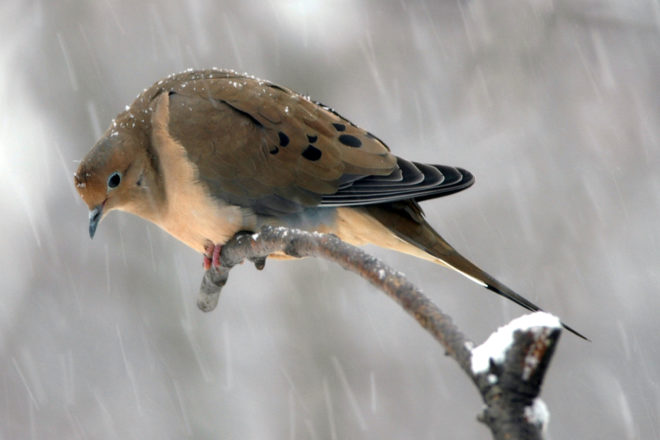 Snow falls on a mourning dove perched near the feeders. Photo by Roy Lukes.

As I write this, there’s a two-inch snow cover on the ground, and more mourning doves are coming into my front yard in search of food. They are gleaners of fallen seeds and bits of suet that drop from the feeders, but they also enjoy getting sunflower seeds that I scatter on the large platform feeder.

Years ago, my late husband, Roy, used to throw cracked corn on the driveway after snowblowing it, and we used to have 20 to 30 mourning doves here at one time enjoying the dried corn. In recent months, it was rare to have more than three doves in the yard at one time; now I count nine.

Sportspeople in the southern United States could legally shoot mourning doves for many years during their hunting season, and Wisconsin added the mourning dove to its list of game birds a number of years ago. We gradually saw fewer doves here once that took effect.

It was estimated about 25 years ago that more than 20 million mourning doves were shot each year in the United States, compared to 14 million waterfowl, which includes ducks and geese. It is the game animal that ranks first in numbers shot annually by hunters in the United States.

These nine- to 13-inch-long doves with wingspans of 17 inches breed in all of the United States, and those that nest in the far north migrate several thousand miles to southern Mexico. Mourning doves that nest in the central and southern parts of our country fly only a couple hundred miles or not at all.

Even though the names “pigeon” and “dove” are used interchangeably, they do have individual characteristics that set them apart from each other. Pigeons tend to be larger and chunkier and have shorter, square to rounded tails. Doves are smaller and more graceful and have long, pointed tails. More than 280 species inhabit various countries of the world.

The sleek, streamlined appearance of the mourning dove is enhanced by its pinkish-gray color and the subtle, bronzy pink and violet coloring on the top and sides of its neck. The prominent white tips of its tail feathers are accentuated when the bird is in flight and its tail is fanned into a long, V-shaped wedge.

At one time, our house had a flat, wooden railing on the upper front deck. Mourning doves enjoyed sitting there on clear winter days to soak up the sun. Occasionally we saw a dove with no toes on one of its pink, fleshy feet. It appeared that they had frozen off. Strangely, the bird seemed to be in good health, but the cause could also have been a foot disease.

There are two other dove species that have been seen in Door County during the past 20 years, but very rarely. One is the white-winged dove, first photographed by Roy in December 2007 at a home east of Sister Bay.

These doves normally inhabit the deserts of the Southwest, where they eat waste grain and seeds on the ground and berries on shrubs and trees. They depend on the pollen, nectar, fruit and seeds of the saguaro cactus so much that they time their nesting to take advantage of cactus blooming time.

The white-winged dove is also found along the coastal Southeast and likes to visit yards that have bird feeders and bird baths. Fledged young can wander widely in the fall, and that’s probably why a few were seen in the upper Midwest late in the year.

The other unusual species that was seen here in October 2009 is the Eurasian collared dove. Larger than the mourning dove, it is recognizable by the partial ring of black feathers around the back of the neck.

Eurasian collared doves are native to Europe and Asia and were introduced to the Bahamas in 1974.  By the mid-1980s, these birds were found in Florida. Cities and suburbs seem to be their favorite territory, but they can also live on farmland, especially where livestock are raised and waste grain is abundant.

The resident mourning doves are easy targets for Cooper’s hawks. There have been several incidents within the last few years in which a hawk flew rapidly into the front yard, scared the mourning doves and caught one that could not fly fast enough. Cooper’s hawks and sharp-shinned hawks are the most common species to prey on smaller songbirds.

To lure doves to your property, put out seeds and suet, and plant numerous evergreen shrubs and trees near the feeding area so they can fly there to hide from predators. For all the great enjoyment we derive from watching birds, we can reciprocate by providing them with as much protection from wild predators as we can.