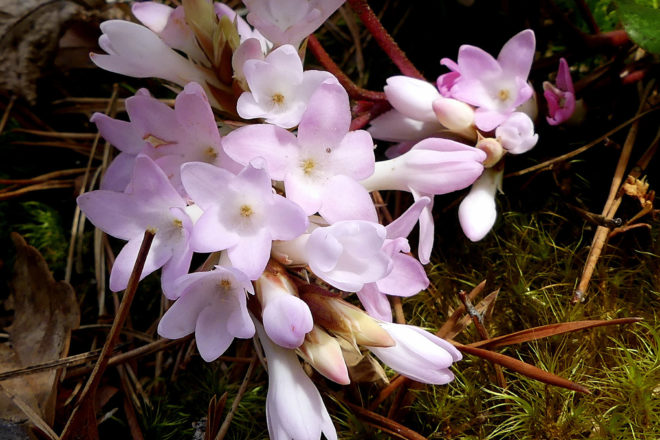 Brilliant, pink blossoms of trailing arbutus are usually the first to bloom in spring in the boreal forest. Photo by Larry Warren.

It is one of the most-anticipated events here in the North Country: the blossoming of the first wildflowers. A few in that category – the skunk cabbage and the trailing arbutus – are secluded and not very abundant.

A good friend, Larry Warren, sent me several beautiful photos he made of trailing arbutus in full bloom on March 15. No, these were not in The Ridges Sanctuary. He photographed them in Great Smoky Mountains National Park.

Soil moisture, air temperature and hours of sunshine are the main factors in how early blossoms appear. This year’s dry winter and spring are so different from those of three years ago. The month of April in 2018 gave my land 39 inches of snow, plus 1.38 inches of rain.

There is a south-facing, grassy slope between my home and garage where we usually find the first blooming hepatica flowers. One mild, dry spring, I remember seeing one blooming on March 30. This year the first one opened April 3.

The plant that my late husband, Roy, and I most enjoyed finding during the years we lived in The Ridges’ Upper Range Light was the trailing arbutus. The earliest blooming date is April 20. That may vary each spring, depending on the three factors mentioned earlier. It was also Miss Emma Toft’s favorite flower.

The evergreen, leathery, oval leaves, two to three inches long, creep along the ground and are protected under the winter snow. Amazingly, the flower buds actually form in autumn and have fuzzy outer surfaces that insulate them from harsh, cold conditions.

Some people call this plant the mayflower because it is most commonly found blooming in May. There are only two species of trailing arbutus in the entire world. The scientific name, Epigaea repens (Ep-i-JEE-a REE-pens), comes from the Greek language. “Epigaea” refers to “upon the earth,” and “repens” means “running on the ground.”

Technically, this wildflower is really a shrub that belongs in the great heath family, which includes the bog rosemary, leatherleaf, wintergreen and bearberry. All of these are native to Wisconsin.

The arbutus is a fussy plant requiring shade and sandy, aerated, acidic soil, and it has an affinity for being near conifers. Yet despite its demanding needs, it enjoys a wide distribution. People enjoy its wonderful fragrance each spring from Newfoundland to Saskatchewan and as far south as Florida. This large swath might make you think that they are abundant, but they are becoming rarer every year.

The arbutus’s beautiful, waxy, white-to-pink blossoms, coupled with its heady fragrance, has led to its almost complete disappearance from many areas today. That’s because it was a fashionable custom years ago to decorate homes with bowls full of arbutus blossoms, which laced the air with their heavenly aroma.

Fortunately, some states have established laws protecting these rare plants. In case some of you gardeners want to transplant them to your land, know that they are protected wildflowers, and state law prohibits removing them from a preserve. Not only would this be illegal in Wisconsin, but it would also surely end in failure: Because arbutus plants are so fussy about where they grow, they are extremely sensitive to sudden changes in environments.

It has been discovered that a mycorrhizal fungus exists on the roots of this unusual plant. This association of roots and fungus is much like that which occurs with trees and many wild lady slipper orchids. It is a symbiotic relationship that aids both the fungus and the wildflower to grow and obtain nourishment.

This plant has historical significance in being named the Plymouth mayflower: It was the early spring blossom that greeted the pioneers at Plymouth Rock after their first arduous winter here. Also called ground laurel, it is the state flower of Massachusetts and the official flower of Nova Scotia , and Native Potawatomi claimed it as their tribal flower and protected it wherever it was found.

A small (one-inch wingspan), dark butterfly, Callophrys polios – or, more commonly, the hoary elfin, which is related to hairstreak butterflies – nectars on flowers in the heath family, including the trailing arbutus and bearberry. Its caterpillar feeds on the leaves of these two plants.

The quiet, hidden environments of the trailing arbutus must be preserved for the small creatures that depend on them and for us larger visitors to rejoice in the sight and fragrance of these first flowers to bloom in spring. Work hard to save the many wild natural areas, and make every day Earth Day!