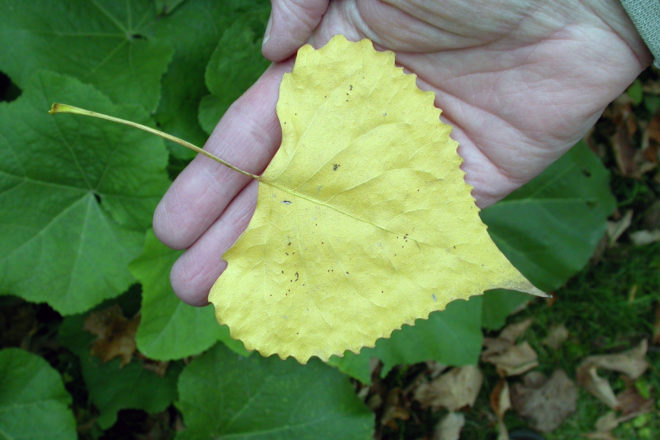 The deltoides species name comes from the delta-shaped leaf of the cottonwood.

This autumn gave us many colorful vistas of sugar maples, white ash, American beech, paper birch and red oak trees as their leaves changed from summer green to brilliant crimson, orange and yellow. Most of the deciduous trees have lost their leaves with the strong winds and rain during the past month.

Now many stand as “bare bones” and take on an entirely different appearance. I like to think that their true character has been revealed. And it is during this season that we invariably come across a tree, usually a large, tall specimen, simply because it stands out on the landscape so conspicuously without its leaves.

One species that I admire, often one or two large trees standing alone along a quiet country road, is the eastern cottonwood. They often have a strong, sturdy trunk with a great crown of branches high above the surrounding farmland. One that Roy and I would enjoy stood, and hopefully still does, along County K in Southern Door.

This species is known to grow from the Gulf of Mexico northward to Labrador and all the way up to the Bering Strait. They are more common in the northern part of their range. The eastern cottonwood, Populus deltoides, gets its species name because its leaf is triangular or delta-shaped. 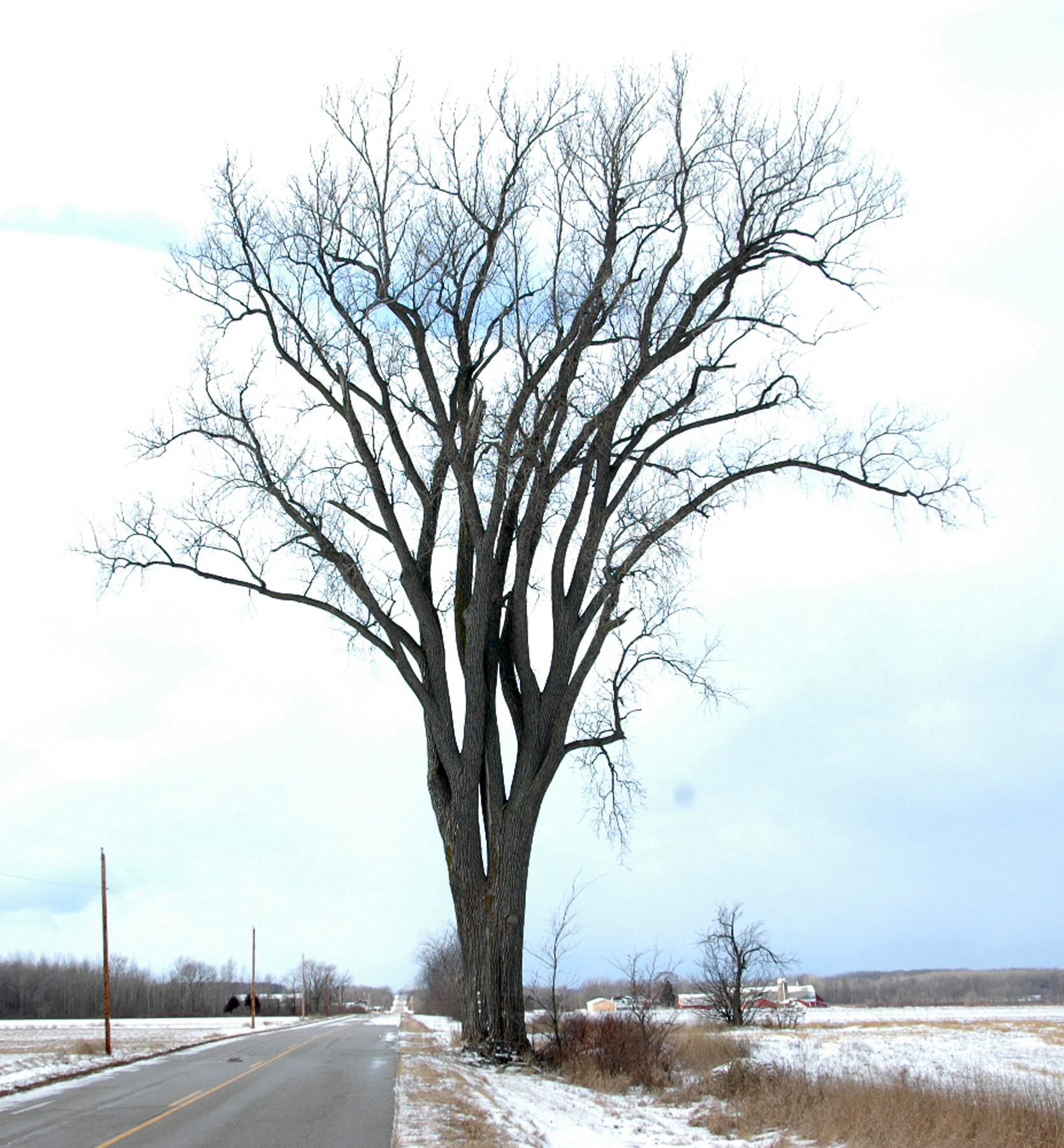 This is the tall cottonwood along County K in Southern Door that Roy and I so admired.

There are two other related species of note in this tribe, a part of the willow family. One is the trembling aspen which has the widest distribution of any tree on the North American continent. The other is the black cottonwood, Populus trichocarpa, a western species that is thought to be the tallest American broadleaf tree. Some have been measured at a height of nearly 160 feet and have a trunk that is 6.6 feet in diameter. The tallest type of American tree is the coastal redwood in California standing at nearly 400 feet.

Many people will scoff at the aspen and cottonwood and not be impressed whatsoever. To them they are trash trees, fast-growing, short-lived, messy, especially if they grow in your yard and bound to give you extra work that you don’t need.

You would have been in for an argument with pioneers traveling west, especially during the 19th century, when the towering cottonwoods were practically the only trees on the Great Plains big enough to provide people, their horses and cattle with refreshing shade.

The reason they do well there is that they often endure where few other trees can. Their roots have a natural tendency to seek water – including in sewer pipes, which is why so many cities in the U.S. ban the planting of cottonwood trees today. They belong in the country.

Years ago, when American cities had mainly graveled roads, outdoor privies and houses with coal-burning furnaces, it was the cottonwoods, with their shiny, smooth leaves, that were capable of shedding the soot and dust that was forever settling on everything in sight.

Cottonwoods are fast-developing trees that commonly add a half-inch outward annually when growing conditions are good. An example of the rapid growth of poplars in general can be found in the advertisements describing some of the phenomenal hybrid poplars. You are guaranteed to be able to grow your own shade and privacy screening in three years, windbreaks and firewood in four years, pulp timber in eight years, and lumber in less than 20 years.

While the relatively hard wood of cottonwoods can’t nearly compete with that of the maples, oaks or ashes, it does have some interesting features. Dried properly it is quite white, sometimes with a faint tint of pink or brown. It is straight-grained with a fine, even texture and is rather light in weight. A good way to describe it is that it is not strong but is tough for its weight and does not split or splinter easily.

Years ago it was even used for flooring and wooden shoes, but primarily for boxes, crates, wood pulp, excelsior, and kitchen utensils were made from this inexpensive readily available tough wood. Poplar veneer was also commonly used for what many of you would refer to as berry boxes.

Examine the buds on your cottonwood and you’ll find that they are big, scaly, quite gummy and if you squeeze them and smell your fingers you will discover their pleasant fragrance. It is widely known among beekeepers that the tacky resin of these buds provides bees with their “bee glue” used in tightening up and sealing their hives.

One of the nicest features of all members of the poplar tribe, including the eastern cottonwood, is their flat leaf stalk or petiole. These provide the leaves with delicate swivel action, and the least little breeze sets them to quaking or “whispering” in a gentle swishing manner.

The cottonwoods and their relatives are among the first to flower in spring. Male trees look furry as they are so heavy with long drooping, pollen-laden catkins. The female catkins appear like narrow dangling strands of tiny green beads. But beware! Wait until they ripen and burst into cottony parachutes. The neighborhood ground in July may resemble the first fluffy snowfall. It is no wonder that they are called cottonwoods.

Big trees are inspiring and wonderful to know, but of far higher importance are people who have permanent, ongoing, living interest in their land and trees and who care greatly about preserving and managing them wisely. Because of their reverence toward the earth, future generations will also thrill to see record-sized cottonwoods.