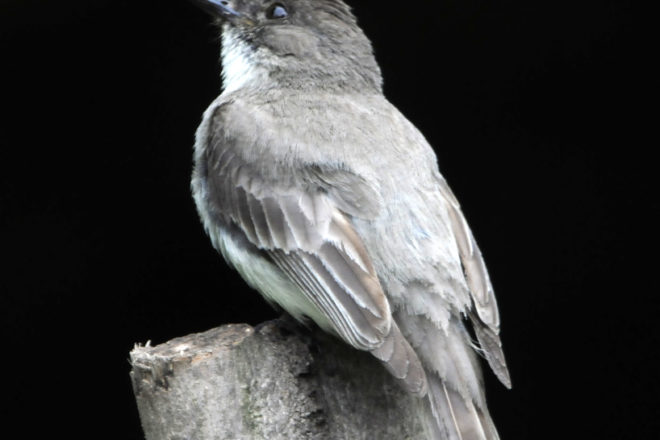 The eastern phoebe is a predominantly gray bird with bits of brown in the wing and tail feathers.

Late March is the time when we usually would see the first eastern phoebe returning to our yard if it was a mild, early spring. This year it may not show up until April. The phoebe is a flycatcher that migrates south to spend the winter in warmer climates – often only as far as the Gulf Coast, but sometimes to Mexico, where insects are available for its diet.

They are the first of the flycatchers to return to their nesting grounds. Other species of the group that nest here are the great crested, olive-sided, least, alder and willow flycatchers; the eastern wood pewee; and the eastern kingbird. The phoebe can survive on seeds, berries and insects that float on water while most other flycatchers must go farther south to find flying insects.

My late husband, Roy, and I visited southwest Wisconsin on our honeymoon and enjoyed seeing a nesting phoebe in Wyalusing State Park. It was in an isolated cavern with rock shelves, protected by an overhang, where the birds could safely bring up their young without disturbance.

For many years, a phoebe built a nest on a special platform that Roy made and fastened under our roof overhang, keeping it protected from the rain. One year a robin found the platform and commandeered it, so Roy built two more. The phoebes found them!

This seven-inch flycatcher has become a favorite summer resident for many years. Last April was the first time when one did not appear. That very harsh, snowy month decimated many local bird populations, and it was a bad year for nesting eastern bluebirds, another early-returning species.

It is said that insects make up at least 90 percent of the eastern phoebe’s diet, with some caterpillars and earthworms as emergency food during heavy rain, when insects are not flying.

One of the most unusual discoveries of our past Christmas bird counts was an eastern phoebe seen on December 15, 1984 – a very mild and snow-free month. We have watched them hunting for food over a wet swale at Toft Point in March, but there are many records of these birds perishing in late-winter storms.

John James Audubon fastened silver wires around the legs of the phoebes in a nest he was observing in Pennsylvania in 1803 and was pleased to learn that two of the banded birds returned to the same general area the following spring. This was supposedly the first bird banding in the country.

Banding studies have proven that this trusting bird can live to be nine years old and that the same pair will return to the same nesting site in successive years. One study of a pair of eastern phoebes revealed that, together, they fed their young, 12 days old at the time, 845 times during one particular day.

The phoebes’ bulky but firm nest is composed largely of mosses, mud and often the remains of the previous year’s nest. On many occasions, we watched our phoebes gather mud from the wet ground surrounding the bird baths. Roy purposely roughened the soil near these baths to create mud when larger birds splashed.

A favorite phoebe sighting is while it is bathing. Rather than hop into the middle of a bird bath and splash away as robins and blue jays do, this bird flies through the water – fluttering from one edge of the dish to the other – and sometimes repeats this several times before flying to a nearby branch to preen.

At other times the bird flies from a three-foot-high perch near the baths, directly through the water, and right up to its preening branch. I often say that because this bird is a flycatcher, it is also a fly-bather! We have also seen the eastern kingbird bathe this way and suspect that other flycatchers do also.

When we used to hear the sweet, musical, liquid “FEE-be-be” during our spring birding classes, our students invariably identified the bird singing that song as the phoebe, but they were actually hearing the black-capped chickadee. The eastern phoebe’s song is a rather abrupt, wheezy “WHEE-be.”

It won’t be long before the music of returning nesting birds will fill the air. Become aware of the changes that occur as winter wanes and warmer spring weather moves in. Rejoice in the renewal of the earth and the eventual greening of the landscape!

Charlotte Lukes will present a program on eastern bluebirds on March 23, 9:30 am, at Newport State Park. The free program will be held in the Nature Center. A state-park vehicle sticker is required.