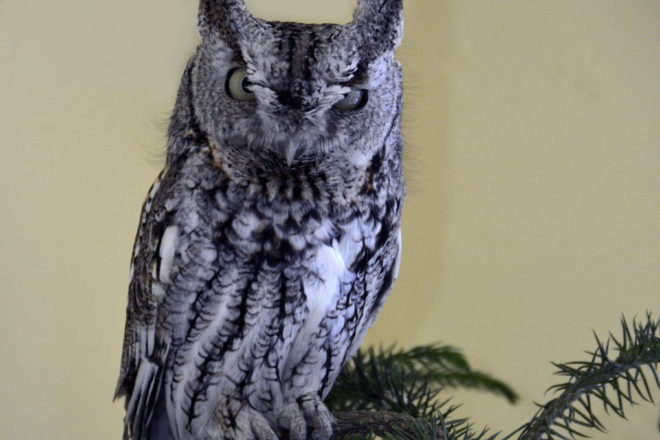 This gray-phase screech owl has its ear tufts raised, and some facial feathers are partly hiding its eyes. Photo by Roy Lukes.

It was five years ago when we had our last polar vortex – during that winter when most of the Great Lakes were nearly totally frozen. I remember how cold it was from January on, and the wind and blowing snow made driving quite hazardous at times.

In January 2014, precipitation was 28 inches of snow – with 30 inches having fallen during the two previous months – and there were 12 days when temperatures were zero or below. This year the January total was 30 inches of snow, plus one inch of rain, and nine sub-zero days!

During that time, my late husband, Roy, and I answered numerous phone calls and emails from people who had found birds that appeared to be in distress. Eastern screech owls were one of the most often encountered. They are a common resident of much of Wisconsin but are more abundant in the southern half of the state.

They are nocturnal, sleeping during the day, so most encounters occur unexpectedly: when someone sees a gray-phase screech owl roosting in a tree or a large nest box. The plumage of the gray-phase owl allows it to blend in well with the weathered, natural wood of a box or the trunk of a hardwood tree.

It was on Jan. 29 of this year when I saw a red-phase screech owl sitting on top of one of my bird feeders in the middle of the afternoon. We’d had 10 inches of snow the previous day, and there was a dangerous wind chill predicted for the following few days. Roy and I had heard a screech owl calling in our woods many years ago at night in August, but this was the first one I have actually seen on my property in 36 years.

The winter diet of these elusive predators consists of small rodents, which mostly live under the snow and sneak out just to find bits of suet or seeds under the feeders. The owl at my feeder sat very still and continued to look down for any movement on the path. After perching there for about 20 minutes, it was gone. The deep, fresh snow cover now makes it difficult for them to find food, so they must hunt whenever and wherever they can find something to eat.

The eastern screech owl is about eight inches tall, with a wingspan of 22 inches. It is a short, stocky bird with a large head and nearly no neck, rounded wings and a short, square tail. Its pointed ear tufts are often raised, and the feathers on its face sometimes make its yellow eyes difficult to see.

Screech owls’ preferred habitat is open woodlands, deciduous forests, parks, suburbs and other places that host their food sources, such as streams and creeks. A diet of small mammals, moths, beetles, earthworms, crayfish and other invertebrates may also include reptiles, amphibians and fish.

Like the osprey, the owl has a third or outer toe that is reversible, so it can perch with two toes to the front and two to the back. Its feet are quite strong for its small size, and this toe arrangement allows the bird to grasp larger prey during the hunt.

Owls are cavity nesters, so it is good to leave large, dead trees standing in your woods to provide natural nesting sites for them – and for woodpeckers and great crested flycatchers as well. The nest is quite simple and lined with wood debris, feathers and fur from their food sources.

They lay an average of four to five slightly glossy, white eggs and incubate them for about 26 days. Then the young stay in the nest for another four weeks before fledging.

The breeding bird atlas project researched from 1995 to 2000 revealed that confirmed nestings of the eastern screech owl were confined to areas in Wisconsin roughly south of Highway 10, with the greatest concentration in the southeastern part of the state.

There are several subspecies of screech owls, and the red phase of the eastern is more abundant in the southeastern part of the United States. In our region, the red phase makes up about 39 percent of the population, with the gray phase being much more common.

The history of this species in Wisconsin showed greater nesting in the northern half during the early part of the last century, but its numbers have declined greatly since that time. As long as I have lived in Door County, I’ve felt it was a rare species, but good friends Kevin and Darrin Swagel have used taped recordings of the screech owl’s song and often find them during the Christmas bird counts.

Orchards used to be great places for screech owls to nest, but then DDT and other organochlorine pesticides ruined their food sources and habitat. They were good mousers and would help prevent bark-stripping by the small rodents.

The ability to hunt in total darkness comes partly from the owl’s ears and how they are set at different heights on the head. A vertical sound is picked up by one ear, and the horizontal region of a sound is gathered by the other ear. They also have serrated leading edges on their flight feathers, which help them fly without making any sound.

The owl’s voice is not the harsh sound its name suggests, but more of a gentle, quavering whistle, sometimes in a descending tone. They are quick to respond to taped recordings, except during the nesting season, when they are very protective of their nest, eggs and young.

Wisconsin breeding records show they occupy nests from early March to mid-July. They can use the same nest box as the American kestrel occupies and have taken the nest boxes of wood ducks.

Many people like to build nest boxes for eastern bluebirds and other small cavity-nesting species, but more people should also construct larger boxes for these important owls. Think about helping the screech owls, and perhaps you will be serenaded by their whinnying, tremulous song late on a summer night.