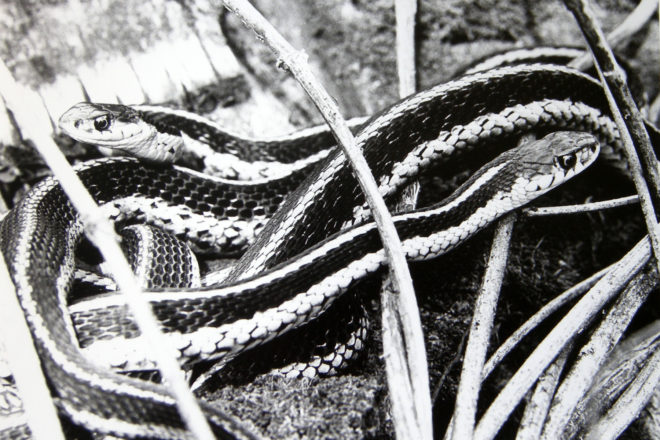 Two garter snakes bask in the sun on the vine-covered roof of an outdoor privy. Photo by Roy Lukes.

Two friends and I enjoyed a hike at a Door County preserve recently – maintaining our six-foot social distancing – when we discovered a garter snake warming itself in a sunny spot in the conifer woodland. We walked a few more yards, and there was another one, soaking up the sun.

These harmless and valuable creatures spend the winter in a communal hibernaculum – a safe, protected area underground or in a massive rock pile – because, being cold-blooded reptiles, they must protect themselves from the harsh winter weather.

Some people are terribly afraid of snakes and want to avoid them. It may be reassuring to know, however, that there are no venomous snakes in northeast Wisconsin, and most snakes try to avoid encounters with people.

There are three species of garter snakes in Wisconsin. The Butler’s garter snake resides in the far southeastern counties, and the eastern plains garter snake lives mainly in the southern part of the state. Our most widely distributed garter snake is the eastern garter snake. It ranges from southern Canada to the Gulf of Mexico and west to Minnesota and eastern Texas.

Interestingly, the name “garter snake” came from its resemblance to the “gaudy garters once fashionable for supporting aristocratic gentlemen’s hose.” That quote is from Madison, Wisconsin, native Richard Carl Vogt’s excellent book, Natural History of Amphibians and Reptiles of Wisconsin. The Milwaukee Public Museum and Friends of the Museum published it in 1981.

Another very good book is Allen Blake Sheldon’s Amphibians and Reptiles of the North Woods, a soft-bound edition made for easy carrying in a field pack. Kollath-Stensaas Publishing published it in 2006.

Snakes begin mating in April or May. Some lay eggs, and others produce live offspring. Our female eastern garter snake retains fertilized eggs within her body and then gives birth to an average of 10 to 40 young during the late summer.

My late husband, Roy, moved into the old Ridges Sanctuary Upper Range Light in 1966. He noticed that hop vines were growing over the old outhouse and that some of the heavily moss-covered shingles on its roof were being lifted by the vines. One summer day, he realized that the roof was a sunning spot for several garter snakes. They could go up and down easily, using the cluster of vines as their highway.

He was able to climb a ladder to photograph these snakes as they calmly enjoyed the sun. They were docile and rarely moved because they did not feel threatened. He said that the inquisitiveness of some of them and their unblinking, gem-bright eyes were beautiful to behold. Their steady position also gave him ample opportunity to enjoy and photograph them.

Despite what some people think, a snake has no feeling of animosity when it flicks its tongue at you. Lacking ears and nose, it is taking a reading of its immediate environment, picking up microscopically small airborne particles, then transferring them to its Jacobson’s organ to be analyzed. This amazing organ serves as the animal’s nose and consists of a sensitive pair of blind sacs opening into the roof of the mouth.

Two of the snakes Roy saw had cloudy, blue-gray eyes: an indication that they were on the verge of molting their skin. As soon as a garter snake molts, its eyes become very shiny and jewel-like because they are covered by clear scales called spectacles that resemble miniature contact lenses and are part of its outer skin. The spectacles are shed along with the entire thin, plastic-like epidermis.

Under normal feeding and growing conditions, they shed their skin two or three times during the nonhibernating period of about six months in this region. Adults grow to a length of 16 to 30 inches, and females tend to be larger than the males.

Garter snakes eat earthworms, frogs, salamanders, toads, insects, leeches, tadpoles and even small fish. Their predators include hawks, crows, skunks, weasels and people. Millions of these prevalent reptiles are run over annually on roads as they move from their hibernacula to their breeding grounds. Many people may say, “Who cares? What good are they?”

Garter snakes may eat some beneficial creatures, but consider the natural food chain: Hundreds of wild animals and plants are kept in reasonably healthy balance through predator-prey relationships. It’s up to us to do all we can to help maintain a balance in nature. Do everything in your power to avoid killing a snake.