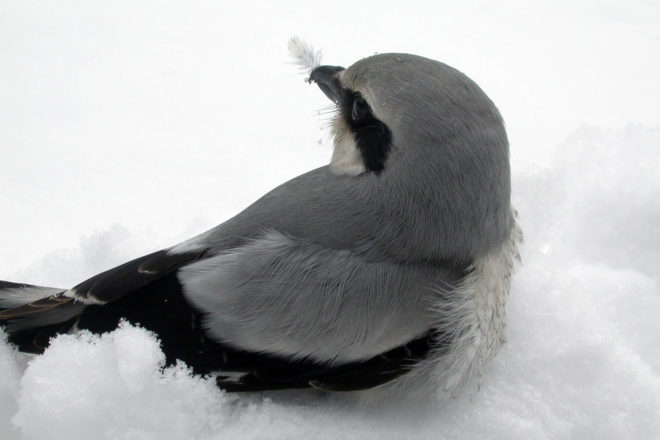 A northern shrike flew into a lower-level window and landed in the snow to recover. Roy was able to get close to photograph it. Photos by Roy Lukes.

Now that we’ve had a few light frosty mornings the bird and plant ecosystem is changing. The American goldfinches are late nesters and were absent from my yard during much of September to mid-October. That’s when the adults were going through their postnuptial molt. Now the feeders and yard are teeming with lots of them. They are year-round residents in our area.

I leave the butterfly garden plants up well into fall so the goldfinches can eat the seeds. They like to sit on the black-eyed Susan plants and pick the tiny seeds out of the ball that used to be the flower.

Dark-eyed juncos are back and enjoy sunflower seeds scattered on top of the large platform feeder. Recently a male cardinal has returned to the yard and also eats on the big platform. Yesterday, as I began working on this story, I heard a very loud bang against the window in the study on the lower level. I jumped up to look for the bird that hit it and a male cardinal was lying on the sidewalk.

I rushed upstairs to get a large brown paper grocery bag, went back downstairs to see that the cardinal appeared to still be alive, went outside, picked up the bird and gently set it in the bottom of the bag. I folded over the top so he could not escape and brought him into the study. Often when a bird hits a window they are stunned or go into shock. When it can rest inside a darkened, quiet space it often will “come to” and begin moving about. I went back to typing at the computer and within about 20 minutes I heard the cardinal’s claws scratching a little in the bag.

Eventually I figured enough time had passed so I took the bag outside and turned it sideways and gently let the bird slide out onto the corner of my raised butterfly garden. There it was sheltered a bit and could survey its surroundings. I looked out about 10 minutes later and it was gone. 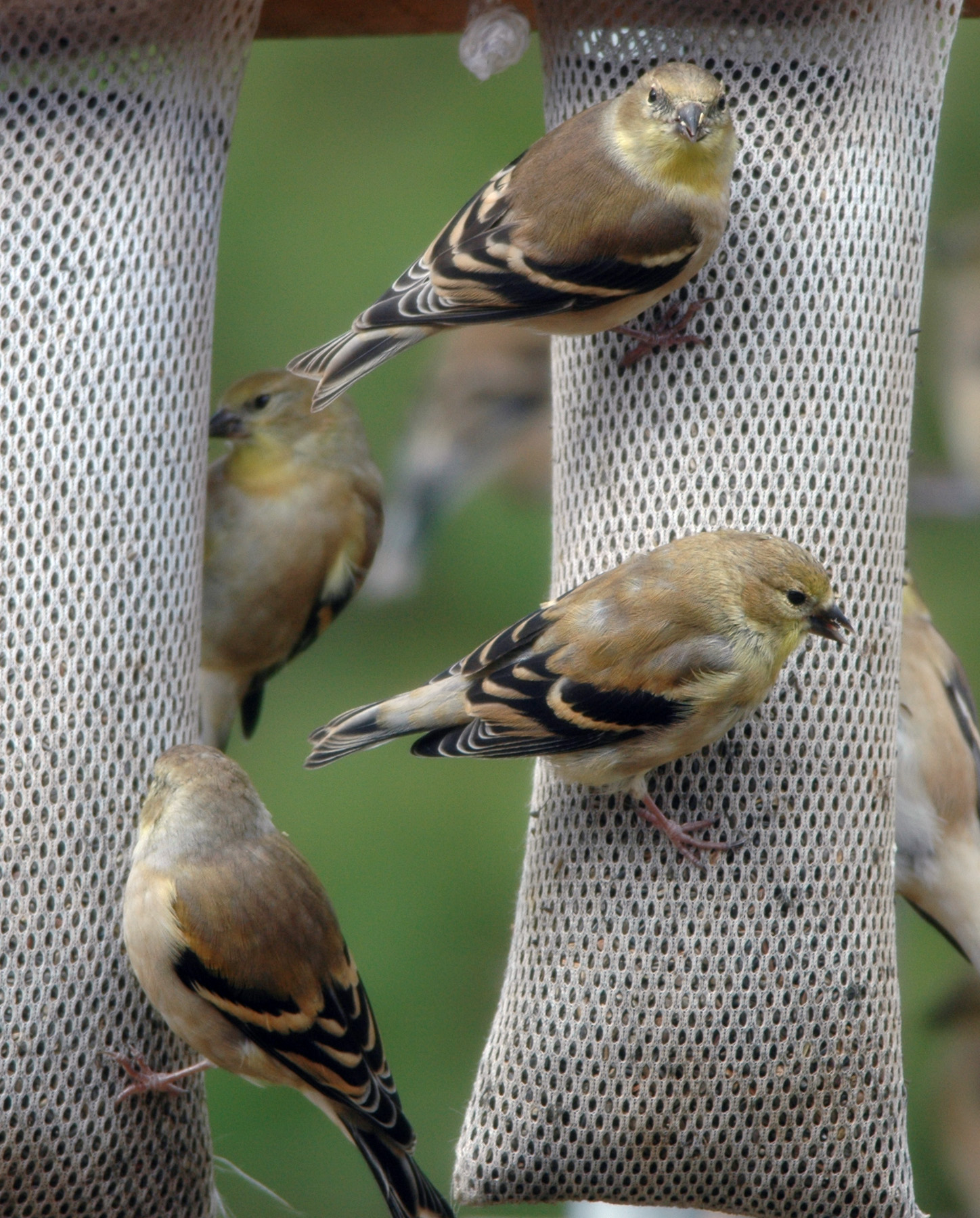 Here are American goldfinches in winter plumage, very unlike the brilliant yellow of the male’s summer dress.

This is the time of year that many hawks are migrating. I noticed a sharp-shinned hawk sitting high in a basswood tree just south of the front yard. A downy woodpecker had come to eat at the suet feeder but now sat as still as a statue. There is a sixth sense in small birds that compels them to “freeze” and not make any movement when dangerous predators are nearby. The hawk is always looking for movement and will strike rapidly to catch its prey.

I walked out onto the deck and waved my arms and the hawk flew off to the south. It took almost five minutes before the woodpecker moved again. It usually takes a few chickadees to fly into the feeders to make the downy realize all is now safe.

The autumn migration is still going on and is very different from the one that occurs in spring; in fact, the Wisconsin Society for Ornithology bird report period is four months long from Aug. 1 to the end of November. In spring we record the arrival dates of birds returning to set up nesting territories for three months. Those dates are March 1 to the end of May.

Now there are many more birds moving south when you consider all the young hatched this summer are traveling, too. They are mainly concerned with finding food and shelter along the way to their wintering grounds.

In spring males usually arrive first and will sing and set up their breeding territory and try to attract a female. There can be some sprightly competition defending their nesting spot and their mate. Now, during the autumn migration, there is little singing going on. Call notes are heard but that is mainly to communicate with others in their group.

I am a member of the Wisconsin Birding Network, an email system where people can post their sightings of unusual or migrating birds. It is free to use and easy to sign up. Go to their website (freelists.org/list/wisbirdn) to learn how to enroll. The spring and fall migrations are the time when many folks alert other members to the movement of birds through the state.

The accipiters, swift flying hawks that can move easily through the woods after smaller birds, are the sharp-shinned, Cooper’s hawk and the much rarer northern goshawk. Often, when a songbird hits a window, it is trying to escape one of these predators.

However, in winter we can also find small birds being prey of a northern shrike. The shrike is a northern nester which will move down here during the severe winter months. It breeds through most of Alaska and the Yukon, across central Canada to the southern half of Hudson Bay. Its winter range is in all the northern tier of states and in the inter-mountain west to southern Utah and Nevada.

We saw a shrike in our front yard many years ago in the middle of winter. The songbirds would sit still, too, when this predator arrived, but its smaller size makes it a bit harder to notice. On a cold winter day, with the ground covered in snow, we saw a shrike actually kill a European starling. It had to drag the dead bird over a snowbank in order to find a safe spot to consume it.

Oftentimes the shrikes will take cardinals as happened one winter several times at a friend’s home east of Sturgeon Bay. It is sad to see a beautiful year-round favorite succumb to the shrike, but this is the normal way of the natural world. We attract and feed birds for our enjoyment and as a way to help them survive the winter. But that also draws in the predators, which must eat them to live. It’s a bird-eat-bird world out there!