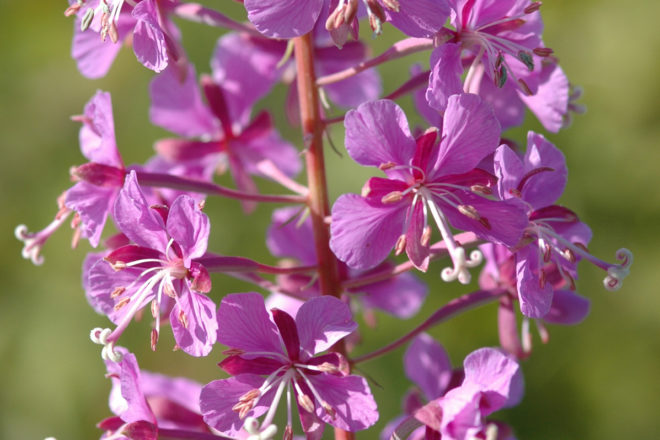 A close view of the fireweed stalk shows dried flowers at the lower end and unopened buds at the top. Photo by Roy Lukes.

One of my favorite wildflowers, the fireweed, will soon be blooming along roadsides and in open, fallow fields.

My late husband, Roy, and I used to enjoy vacations in the Upper Peninsula of Michigan, and one trip to Grand Marais was memorable. This small town on the south shore of Lake Superior has a park above the sandy beach where we relaxed in our lawn chairs near a large patch of fireweed in full bloom on a sunny summer day. Another reason why that trip was noteworthy is that the fireweed was blooming during the peak of the wild blueberry crop. We spent a good amount of time in the Kingston Plains harvesting those delicious, blue fruits.

During the early years of living here in the center of the peninsula, we often enjoyed walks along a quiet gravel road between orchards and farmland. There was one field that had a large patch of fireweed along its edge, and as the season progressed, we noticed how the long seed pods opened to reveal their silky hairs, beautifully backlit by the morning sun.

The gradual opening of the flowers from bottom to top on the four-foot-tall spikes can last five to six weeks, and some may still be in bloom by the middle of August.

The scientific name has a beautiful, poetic sound. It’s Epilobium angustifolium (ep-i-LO-be-um an-gus-ti-FO-le-um). The genus name Epilobium comes from epi, meaning “upon,” and lobon, referring to a capsule. As is quite common in the evening primrose family (to which this plant belongs), each flower is born on a long, slender capsule. Its species name, angustifolium, refers to its narrow leaves, which are sessile, meaning they have no stalks.

The leaves grow quite close to the ground, and the flowers begin about two feet above, each born on a long stem directly above the leaf. As you examine the opened flowers, you realize that the leaves do not show themselves until well after each flower has passed its peak bloom.

Like other highly developed flowers, those of the fireweed are proterandrous, meaning that the stamens reach maturity before the pistils do so that self-pollination cannot easily occur. However, if insect pollination does not come about for some reason, then the style will go through quite a variety of twisting maneuvers in order to touch the pollen-bearing anthers of the same flower.

The farther north you travel, the more fireweed you’re likely to see. (These flowers are quite abundant in Alaska.) Much of Michigan’s Upper Peninsula was burned following the logging era, and the fireweed followed close on the heels of the burning. How fitting that Mother Nature would so elegantly adorn the black, charred landscape with such attractive displays of blazing pink: a soothing reassurance that slowly, many plants would heal this huge wound.

These plants grow easily on sunny, disturbed sites, including dry ditches and roadside banks. Early-morning backlighting from the sun on the numerous, inch-wide blossoms do indeed make them appear to be on fire. The plants stabilize the ground and cut down on soil erosion in cities and rural areas.

Acres of fireweed flowers soon took over some of the bombed-out areas of London during World War II. The English call this plant willow herb. Canada’s Yukon Territory has chosen the fireweed as its official floral emblem. The largest patch we saw years ago grew along the Highway 42-57 bypass east of Sturgeon Bay, but now many trees and shrubs have taken over, shading out the fireweeds.

It’s unfortunate that this interesting and showy flower got tagged with a “weed” name. Few plants can match it, and this native plant that’s found in all but five Wisconsin counties is not troublesome or invasive in the least.

Look around your area for a patch of fireweed, then single out one plant to examine in every respect. Chances are, this pink beauty will become one of your favorites, and you’ll look forward to its annual reappearance. I bet you’ll get fired up over fireweed.