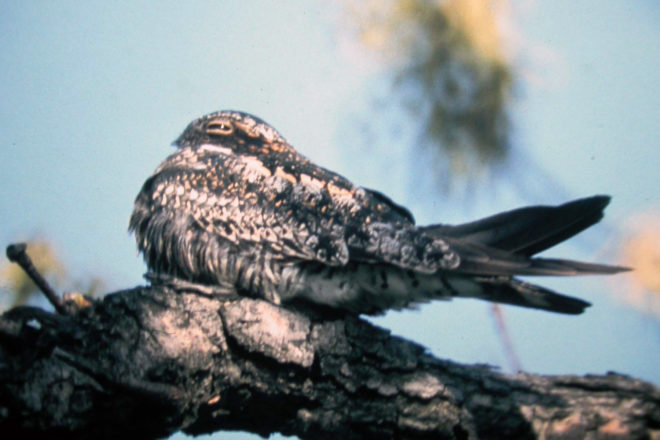 When nighthawks rest they perch lengthwise on a branch. Photo by Roy Lukes.

An email came in recently from a good friend telling of seeing the first migrating nighthawks over northern Door County on Aug. 12. This is the beginning of the long drawn-out fall migration of many birds that must spend the winter in warmer climates.

Nighthawks are in the family Caprimulgidae (cap-ree-MUL-jee-day), which includes the whip-poor-will, Chuck-will’s- widow, the common poorwill as well as a few others not seen in this region. Nightjar is another generic name for these birds and it probably came from the European nightjar. The term refers to their activity around night time.

All are insect eaters and now is the time to watch for the swooping, soaring, acrobatic feeding of migrating nighthawks. They are crepuscular (kre-PES-kew-ler), meaning their greatest activity is at dawn and dusk.

The common nighthawk breeds from late May to mid-July with no nest-building. The female lays her two eggs on dry sandy or gravelly soil in area where pines or oaks are abundant or in fields or even on flat graveled rooftops and are incubated for about 19 days. On clear days the female will shade the eggs with her body from the direct sun. On cloudy days this is not necessary. 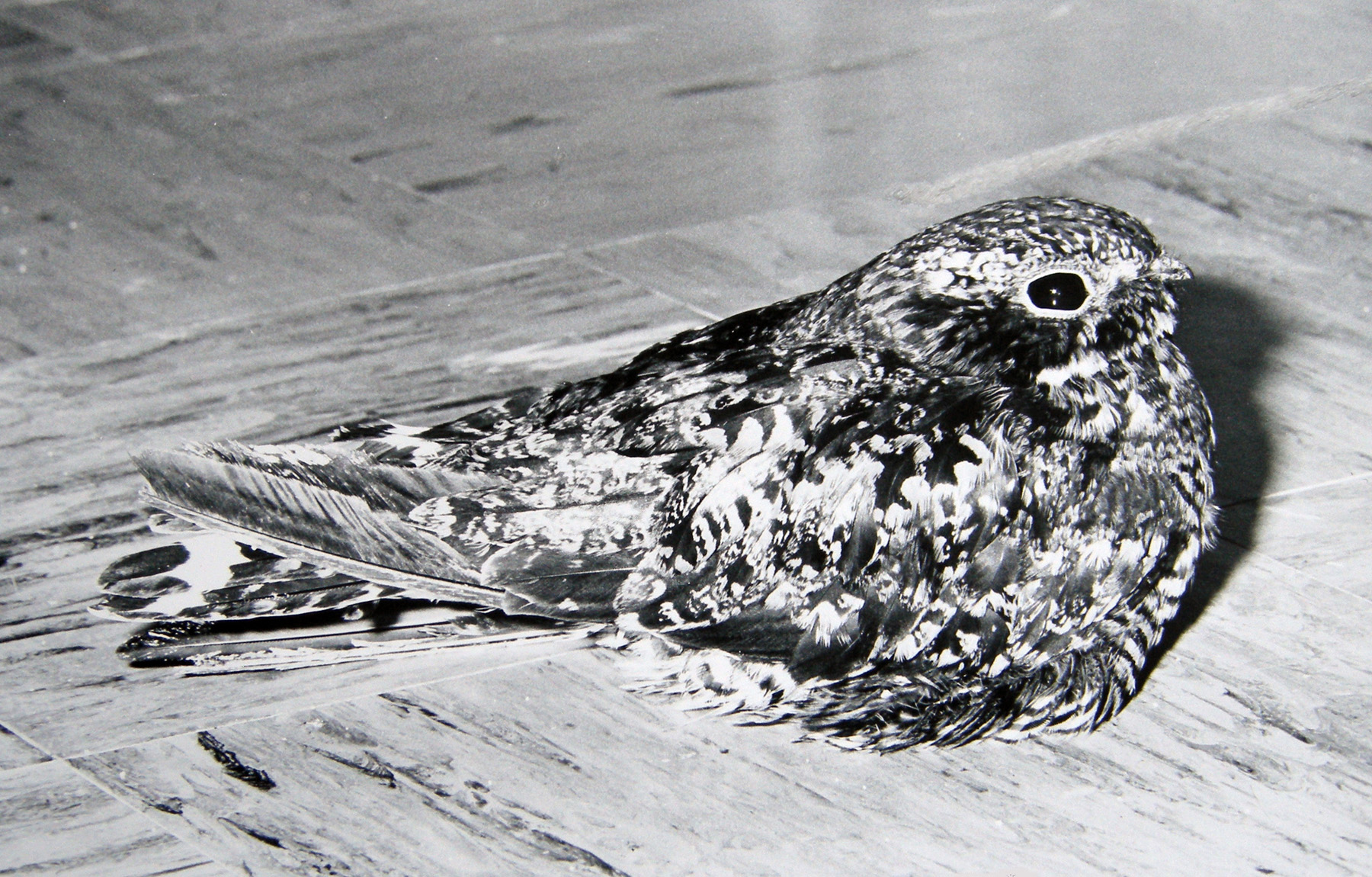 An injured nighthawk at the Koenig home shows its mottled feathers, big eye and tiny beak. Photo by Roy Lukes.

I remember sitting on our deck years ago with friends at about 6 pm when suddenly common nighthawks appeared in the sky catching insects. It was about mid-August and their low, raspy, airy “dive bombing” displays fascinated us the most. This continued well into the early evening to the point that we could hear them but not actually see them.

When Roy was in graduate school in Madison, back in the late 1950s, he learned how the sound was made. He watched a courtship display near the rooming house where he lived in early June. A female nighthawk was perched lengthwise on a heavy phone line. The male flew up to a height of a hundred yards, then, wings held at a rather high angle, would go into a swift dive. When he was within 40 or 50 feet of the female he suddenly cocked his wings sharply downward as he pulled out of his dive. It was during this downward wing-cocked portion of the flight that wind was forced through the flight feathers producing the raspy sound.

When walking in downtown Sturgeon Bay in early evenings back in the 1970s I remember hearing the buzzy “bzeep” call of the nighthawks and saw their irregular bobbing flight as they caught flying insects. When the streetlights were on many insects would fly around the bright bulbs and that attracted the nighthawks to feast on them. I don’t know if that happens in Sturgeon Bay anymore.

The name goatsuckers dates back to the olden days when people who raised goats believed that these birds, frequently seen flying low over the pastures, were guilty of sucking milk from the goats. Actually, even though they regularly captured insects in the grass too, they were perfectly innocent as to the milk drinking.

The first Wisconsin Atlas of Breeding Birds showed one confirmed nesting of nighthawk in a priority block near Peninsula State Park and three other possible nesting areas in our county. One of the most abundant counties for confirmed nesting was Marinette just across the bay from Door County.

The birds are so secretive, resting during the day, and very well camouflaged, that finding an active nest is not easy. Due to its difficulty in monitoring, experts believe the species population is on a slow decline. The change from flat gravel roofs to other smooth artificial surfaces in many urban areas may add to the decline.

There is also great concern with the direct and indirect effects of certain pesticides since these birds are primarily insect consumers. Nighthawks have been living in association with pine and oak barrens in much of the upper Midwest so improving the habitats of this type of environment may help the species. 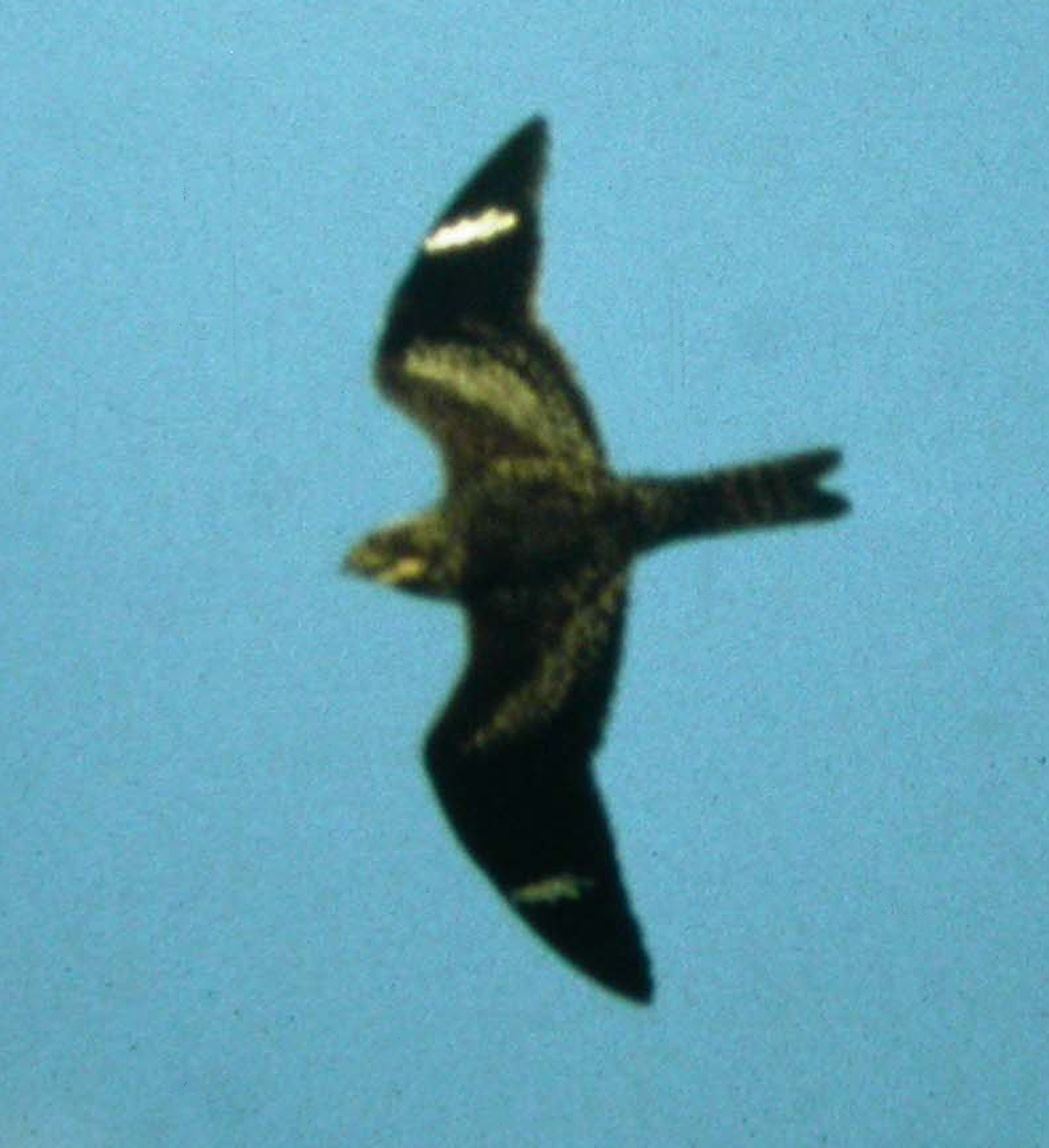 You can see the bold white stripe in the primary feather of the pointed wing of a flying nighthawk. Submitted.

A famous couple who had a federal permit to care for injured birds in their home in Sauk City, Wis., Henry and Edna Koenig, were dear friends of Roy’s when he lived in Madison. We went to stay with them for a few days and watched them care for the birds. One of the injured occupants was a common nighthawk that had been hit by a car and couldn’t fly anymore.

Fluffy, as they called it, and all other injured nighthawks they had cared for, had to be force-fed everything they ate. Normally this species gets most of its food while flying through the air with its mouth wide open snatching many flying insects. The beautifully mottled bird rested quietly and comfortably on the floor, or on newspapers. It appeared to be nicely conditioned to the presence of humans.

When Roy slowly moved his hand to within six inches of Fluffy it would produce a comical, deep-throated, almost mechanical-sounding rattle, then cautiously side step away from his hand. What impressed us most were the bird’s gorgeous large eyes.

One spring as Roy and I were leading a group of birdwatchers northward from Green Bay after the annual convention we stopped at the Gardner Swamp Wildlife Area in Southern Door. I discovered a nighthawk in the woods. It sat lengthwise on a tree branch and allowed all 30 of us to admire its well-camouflaged beauty. It rested motionless apparently quite fearless of every person. What an unexpected treat!

When these birds are soaring above you, notice the weaving, bobbing flight pattern. The wings are very pointed and have a single white line across the underside not far from the tip. Its body length is around 10 inches and the wingspan is nearly 20 inches.

Chippewa Indians called this docile bird “Besh-que” and clearly distinguished it from its cousin the whip-poor-will. Actually the bird is no hawk at all. In fact its feet are extremely weak and its beak exceptionally small, however, when its open, it exposes a surprisingly cavernous mouth, encircled with many hairs, wonderfully suited for capturing insects on the wing. Mosquitoes, flying ants and even grasshoppers are among the many kinds of insects these valuable dive bombers eat.

Our Door County records from the past 10 years show that the last sightings of southbound nighthawks ranges from Aug. 31 to Sept. 14. Take time to gaze skyward at dusk these next few weeks to look for migrating nighthawks and thank them for providing great insect control as they put on an acrobatic fly-catching show while passing through our area.