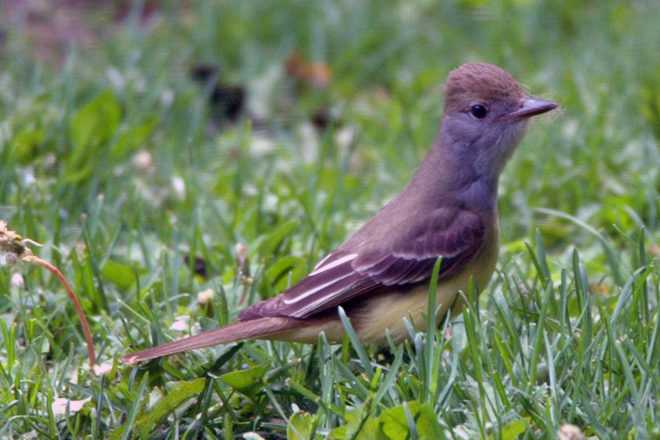 Occasionally a crested flycatcher will hunt for insects on the ground. Photo by Roy Lukes.

Some of the most valuable standing trees in the natural undisturbed woods are the dead ones. Follow the daily activities of certain birds and you’ll soon discover why this is true. Nuthatches, chickadees, woodpeckers, wrens, some owls, kestrels and crested flycatchers depend largely upon nesting cavities found in dead or dying trees. Remove the standing dead trees in your woods and you’ve destroyed the high-rise apartments of many wild animals.

We received a phone call the other day from our friends who live in the woods along the bluff on the west side of the peninsula. They were walking along their road when they saw a bird in a tree from a distance. At first they thought it might be a female rose-breasted grosbeak. Then they noticed its rather prominent head and figured it could be a female cardinal. Finally they got close enough to positively identify it as a crested flycatcher. It was then that they saw it enter its nesting cavity in a large dead branch stub of an old American beech tree.

Observations during the next few days revealed young in the nest, regular feeding habits and good photographing times when sunlight reached the nest hole. Their car, parked near the tree along the road, helped to condition the parent birds into trusting that huge shiny man-made object. This was important because it would serve as my blind from which I could take photographs.

Calls of the fearless rusty-tailed great crested flycatchers rang with authority through the warm humid maple beech hemlock climax forest as we set up the camera using the partly raised window and a special clamp as a sturdy tripod. Their first return to the old beech was hesitant, as they acted nervous and uncertain. Several passes were made close to the nest hole before they finally adjusted to our presence and brought food to their young.

Two holes were used to enter and leave the nesting cavity. The upper and larger one was a knothole where a branch had broken off the tree in the past. The lower entrance appeared to have been made by a woodpecker in a previous year. Crested flycatchers have a habit of using old abandoned nest cavities.

We noticed that both parents would each make three or four feeding visits during a 15- or 20-minute period, and then be away for about 10 to 15 minutes. Once, at about 2:40 pm, they were away for a slightly longer period of time and we could not hear their calls.

Their return was always noisy and resounding with their loud and far-reaching “whEEP, whEEP, whEEP” calls. As far as we could tell this challenging call was made with their beaks closed, whether they were carrying visible food or not. The closer they got to the nest hole the louder were the calls from the babies, sounding surprisingly like the adults but not nearly as shrill and commanding.

We marveled at the adults’ delicate plumage showing soft shade of olive on the head and back, light yellow on the belly and gray on the throat and upper chest. Their tails and primary wing feathers were a bright rust color and showed beautifully as the birds wheeled and turned while flying to and from the nest. Occasionally, when entering the top hole they appeared to move directly downward showing their yellow under tail coverts as well as their flashy reddish-brown tail.

Twice, as we sat quietly waiting for action, an adult landed in the elderberry shrub within 10 feet of the van, saw its reflection in the windshield, and flew straight toward us as though challenging that third flycatcher. 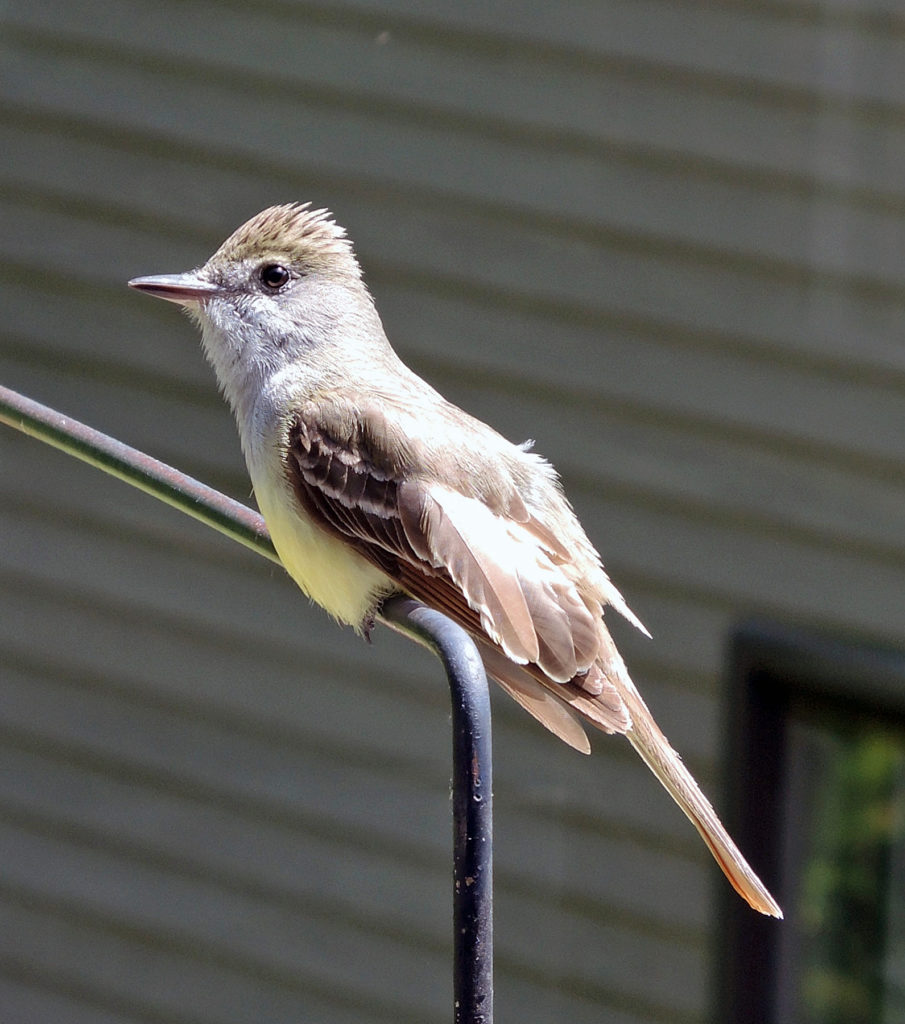 Our resident crested flycatcher likes to perch on the rod which holds the hummingbird feeder on our deck railing. Photo by Roy Lukes.

We have had crested flycatchers nesting in our woods for many years and just in the past few summers have they been seen on our deck railing waiting for a snack to fly by. Last summer the adult that spent a lot of time on the deck found its reflection in the house windows and repeatedly flew at the glass to chase off the “uninvited guest.”

The calls of three other birds near our van could be heard as we photographed the nest hole. They were a robin, blue jay and white-breasted nuthatch. None of them produced even the slightest disturbance to the flycatchers during the two hours we observed them. The greatest competition that would offend the flycatchers would come from some starlings. Fortunately European starlings are not protected by state or federal laws.

We will watch the development of this beautiful family of crested flycatchers until the last one has fledged and left the nest. Then, using a ladder, we will carefully inspect the nest to see whether that proverbial snakeskin is included in the nest materials. Much speculation has surfaced from ornithologists in past years indicating that the snakeskin might be placed in the nest to ward off predators. I tend to believe that there doesn’t have to be a reason for this occasional phenomenon. Many nests of this species are known to lack snakeskins. Others may have bits of waxed paper, cellophane or even aluminum foil.

Those of you who own woodland can do several things to help crested flycatchers. In the first place, don’t try to get your woods to look like a city park. Allow plenty of the dead trees to remain standing. Setting out larger-holed nest boxes will help the bigger birds to find a place to raise their young. Too often only small bluebird-sized birdhouses are made. Few people think of placing bird boxes in the woods.

Get a book from the library about attracting birds and get busy before this fall. Don’t wait until spring to set up the houses. A number of birds need them for winter shelter as well as for summer nesting. We have seen kestrel or woodpecker boxes being used by the eastern screech owl during the cold winter months. Give the birds special places for shelter and nesting and who knows what you will enjoy seeing in your woods!