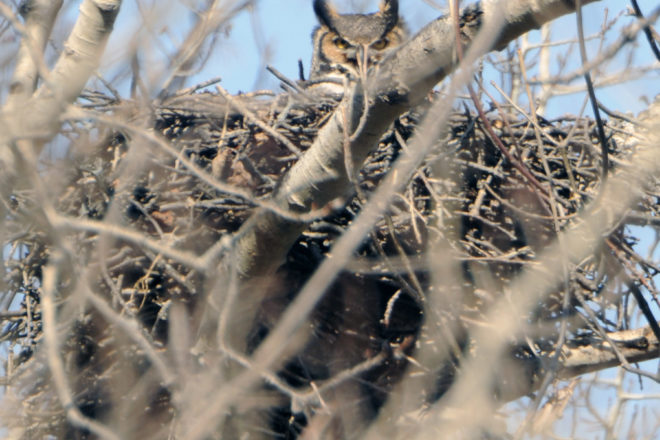 A female great horned owl on her nest looks small compared to the gigantic size of the structure. Photo by Roy Lukes.

Which species of bird lives and nests in more counties in the continental United States than any other? The answer is the great horned owl, and that may come as a surprise to many people.

It is a bird that is most active at night and does not visit feeders like some other species, except to perhaps find meadow mice, voles or other small animals that are attracted to the dropped food during the darkest hours of the night.

Several nights during the past month I have heard the calls of the great horned owl, either at about 10:30 pm or at 6 am. There must be calm wind conditions for this to happen because sometimes the bird calling might be a quarter mile away. Late fall and early winter is the courtship time for these largest of our native Door County owls. Several years ago I remember hearing the male call and then the female answer. Her voice is slightly higher in pitch than the male’s.

This owl’s physical makeup is suited for nighttime hunting. The leading edges of their long, wide wings are very soft and serrated, thereby providing these awesome birds with nearly silent flight. Their thick layer of soft body feathers also helps to mute the flight sounds and provides excellent insulation in subzero weather.

The great horned owl’s ears, and those of other owl species, are asymmetrically shaped and positioned on the sides of its head. One of the ears enables the owl to localize sounds in the vertical position, determining how low or high above the ground the sound of its prey is. The other ear reads the horizontal location, finding exactly from where to the left or right of the bird the strange squeaking or rustling sounds are coming.

Finally, the distance between the two ears provides the owl with triangulation and an amazingly accurate gauge of distance: how far away the mouse or other prey is.

I am fortunate to be living in excellent great horned owl habitat. The nighttime and predawn singing of these birds began to intrigue Roy and me as soon as we moved into this upland hardwoods more than 36 years ago. The thickly wooded Hibbards Creek valley lies a bit more than a mile to the east and provides the great horned and the barred owls of this area with excellent hunting habitat.

Roy was a musician during much of his early life, and in his later years, he enjoyed playing an ocarina, which means “little goose” in Italian. He had one made of terracotta, and it had the lowest pitch of his collection. One night, upon hearing a great horned owl calling, he went out with two of his ocarinas, each in the key of C, and tooted to compare their sounds with the owl.

He assumed that the large owl’s voice would certainly place it in the lower-range instrument — in the “bass section” of the owl chorus. He was truly surprised to learn that the majority of the bird’s monotone singing was in the middle-C range and not as low as he had imagined.

One early evening in January quite a few years ago, Roy and I were treated  to the pair-bond singing of two great horned owls. In light of the fact that the male is smaller than the female, his voice is nevertheless lower, stronger and mellower. Her song is invariably softer and usually three to four half-tones higher than that of the male.

Occasionally during their beautiful concert, her song would immediately follow but wouldn’t begin until his was completely finished, sounding something like “who-WHOOO-who-who.” At other times she would chime in before he had completed his aria. And once in a while they would sing a nearly perfect duet, even though it wasn’t in the best of harmony.

Like a foghorn, the songs of the owls are sound beacons in the night. Not only are they used in courtship, but they also provide the birds with territorial assertion: “This is my property. Stay away!”

A common question is why the female is the larger owl. Consider the incredibly sharp, weaponlike talons these birds have. Courtship could conceivably get to be quite savage, and should the male be larger than the female, he might badly injure or even kill her. It is not uncommon for a large female, compared with a smaller male mate, to be a pound heavier and seven inches longer, with a wingspan a foot longer.

Have you heard the term “eating crow?” Well, great horned owls really do! The crows mob and pester the dickens out of an owl by day, so it’s not a surprise that eventually the great horned owl gets revenge by raiding their roosts at night, killing and eating some of the crows.

It is quite easy to locate a great horned owl nest during the day simply by listening for the raucous, frenzied chorus of mobbing crows. Fortunately, once the crows begin their nesting, their interest in the big owls suddenly subsides.

The female great horned owl usually lays two or three eggs, sometimes well before the end of February. The eggs are incubated for 28 to 30 days before the tiny owlets — the size of baby chicks — are hatched, covered with a soft, thick, gray-white coat of down and their eyes closed.

The owlets will attain a third of their ultimate size in 14 days and half of their size in 21 days. They will be nearly full grown by the end of four weeks.

The young will be flying well by the 12th week but will be half a year old before their talons will be fully developed, making them capable of hunting and capturing their own food. It’s little wonder that the nesting of these birds begins so early in the year.

Writer Ernest Thompson Seton ranked these “flying tigers” among the most pronounced and savage of all birds of prey. It’s quite wonderful to realize that so many counties in our country are still wild enough to support these magnificent creatures!