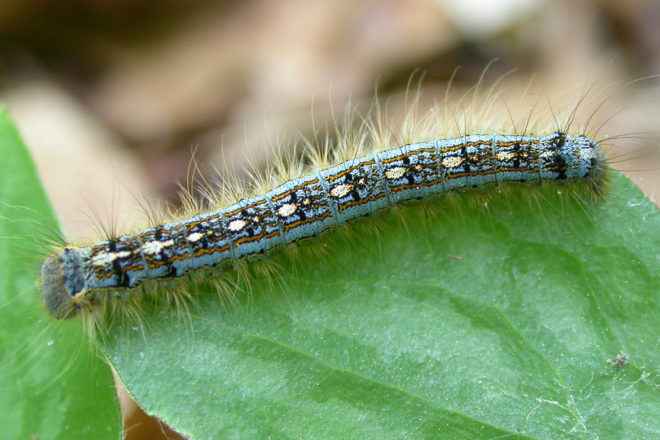 The caterpillar that turns into the cecropia moth has tubercles of wild colors. Photo by Roy Lukes.

People enjoying the outdoors, and especially gardeners, may notice a number of hairy cats on the move these days – but many are not hairy, and none are cats. What I’m referring to are caterpillars. The word comes from the Old North French word “catepelose,” meaning “hairy cat.”

When we had a large vegetable garden, the tomato hornworms, cabbage loopers and cutworms were all removed from plants before they could destroy them. You may realize now that caterpillars go by many names, and a few are even referred to as borers or slugs.

Did you ever think that it’s not a wormy apple that you may bite into, but rather, a caterpillary apple? Those so-called worms are perhaps the caterpillars of coddling moths (and they’re also known to attack pears and peaches).

One caterpillar – the most lavishly decorated of all – can give people a scare. It’s the cecropia moth caterpillar: a fantastic creature with ornamental tubercles on the top of each segment. On a fully grown larva, the tubercles are blue on the first segment, large and orange-red on the second and third segments, and greenish-blue with blackish spots and spines on all other segments except the 11th, which has one large, yellow tubercle ringed with black.

What fascinating forms of protection many species of these vulnerable, slow-moving caterpillars have. Tomato hornworms, which can defoliate a large tomato plant, all have a single, vicious-looking horn with tiny barbs on their rear end. This appendage is flexible to the touch and completely harmless to humans, but it’s not known whether it has a harmful effect on predators such as birds.

The soft-green color of the hornworm makes it difficult to find within its tomato paradise. Having eaten the foliage and sometimes the stems of the plants, it stands to reason that it’s the same color. Many caterpillars have colors and shapes to help them blend in with their surroundings.

The caterpillar of the beautiful black swallowtail butterfly could be called the skunk of the butterfly world. If you touch a tiny twig to its body, yellowish-orange scent organs that look like tiny horns will emerge out of the two Y-shaped pockets in the segment just behind its head. They contain a peculiar, nauseating caraway odor that’s obviously designed to ward off predators.

A familiar caterpillar that we usually see during the late summer is the wooly bear, with its reddish-brown middle and black coloring at both ends. It eventually pupates into the Isabella tiger moth: a two-inch, tawny-yellow moth found in most of the U.S. and into southern Canada. There’s been a belief that one can predict the severity of the coming winter by the length of the inner band on the wooly bears, but experts say there’s nothing to it. Just rely on the Climate Prediction Center’s outlook!

A word to the wise: It’s best to handle any hairy caterpillar with caution. The broken-off spines or thin hairs of some of these creatures act much like tiny bits of sharp fiberglass, so they can be irritating to the skin and extremely painful in the eyes.

One caterpillar that we found in our woods was quite colorful. Its body was mostly blue, with irregular orange stripes; a large, white, oval spot on each segment; black lines across its body; and bristly hairs along the sides. It was the forest tent caterpillar. Adults are about two inches long and can cause widespread defoliation of aspens, with outbreaks occurring about every 10 years.

The monarch caterpillar is familiar to many people, some of whom collect them to carefully raise these larvae in captivity. This allows for a safe formation of the chrysalis, which helps to produce more monarch butterflies and propagate these magnificent creatures.

The monarch caterpillar and tomato hornworm both have tiny vents on the sides of their abdomens called spiracles. These are actually breathing pores. Air passing through them is distributed throughout their bodies by a system of air tubes called tracheae (TRAY-kee-ee). In a sense, caterpillars and insects have tiny lungs throughout their bodies that are vastly different from our own lungs.

Become a good observer of these fascinating creatures, and learn how they affect many aspects of nature. John Gay summed it up perfectly in 1727 when he wrote, “And what’s a butterfly? At best, he’s but a caterpillar, dressed.”