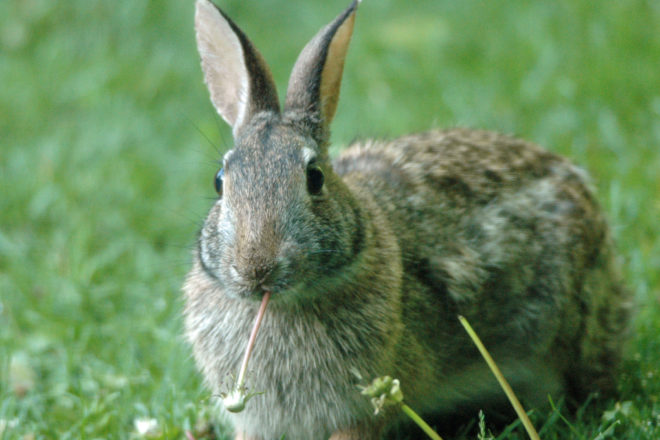 This cottontail nips a dandelion stem at ground level and eats it like a strand of spaghetti. Photo by Roy Lukes.

Each day, a little after sunset, a large cottontail scampers across the front of my house and down the brick path to the bird feeders. It eats the fallen seeds and scattered cracked corn after all the squirrels and birds have gone to their nighttime roosts.

We are familiar with the cottontail, which is very common in our country. It’s harelike because it does not live in a burrow, yet it’s similar to a rabbit because it bears young that are naked and blind. So what shall we call it? The accurate name is cottontail rabbit.

The terms “rabbit” and “hare” can be confusing. The names originated in the Old World. A European hare lives above ground and bears its young well furred and with their eyes open. The European rabbit lives in burrows and has young that are naked and blind. So our native cottontail is a little of both, living above ground but bearing naked, blind babies.

Rabbits and hares belong to the Leporidae family, with Sylvilagus being the genus of rabbits and Lepus the genus of hares. In fact, there’s a constellation named Lepus because it’s shaped like a hare.

Hares have longer ears and longer hind legs than rabbits. There are 11 species of hares in the U.S. and Mexico, but to confuse things, there are three hare species called black-tailed jackrabbits. They got their name from their very long ears, which people associate with jackasses.

Teeth are important for gnawing. Like squirrels and mice, all rabbits gnaw and have similar long, curved incisors, but rabbits have an extra pair of small, cylindrical teeth behind the upper incisors. This distinguishes the rabbit’s skull from the skulls of the squirrel, mouse and rat.

Rabbits cannot use their front feet as a pair of hands for holding nuts to chew on the way squirrels do, and their feet are covered with fur, which makes rabbit tracks in the snow less distinct.

There are eight species of cottontails in North America. The scientific name for ours, the eastern cottontail, is Sylvilagus floridanus, (sil-VIL-eh-gus flor-eh-DAN-us). Perhaps the genus name is derived from “sylvan,” meaning “of woodlands.” It is the most common and widespread cottontail in the United States.

The other cottontails, by common name, are brush, pygmy, marsh and swamp rabbit, plus desert, Nuttal’s and New England cottontail. Each species has several subspecies or races.

Cottontails have quite a range in size and fur color. They can vary from 14 to 18 inches in length and two to three pounds in weight. The fur differs somewhat in color, depending on their home environment, but all have similar peppered, brown backs and buff flanks, with a bit of black on hips and faces. All have white bellies with white to tan legs.

The common round, powder-puff-like tail is white, giving it the name. Our native cottontail’s posterior appendage is twice as big as that of the snowshoe cottontail and barely half as long as the tail of a jackrabbit.

The normal range of our eastern cottontails is all of eastern North America, westward to the foothills of the Rocky Mountains, then south to southeast Arizona and down into central and western Mexico. They prefer brushy, open areas bordering woodlands and are most active at dawn and dusk.

Grass is vital to this animal, not only as food, but also as a lining for the depression made in the ground in which the young are born. The female rabbit plucks fur from her body to add extra cushioning and warmth for the naked babies.

Three to eight young make up a brood, and they are about the size of a man’s thumb at birth. They grow quickly, and by two weeks, they are about as big as a child’s fist. By then, they begin to move about and are fully furred. Even at this early stage, they know to “freeze” if danger is near. When standing still, they blend in with the plant life and are all but invisible to the predator.

Some friends have said they hate to see cottontails in their yards because these creatures eat many ornamental flowers. I have no problem here because my lawn is filled with weeds, and I often see the rabbits consume those plants instead of the native flowers in my butterfly garden.