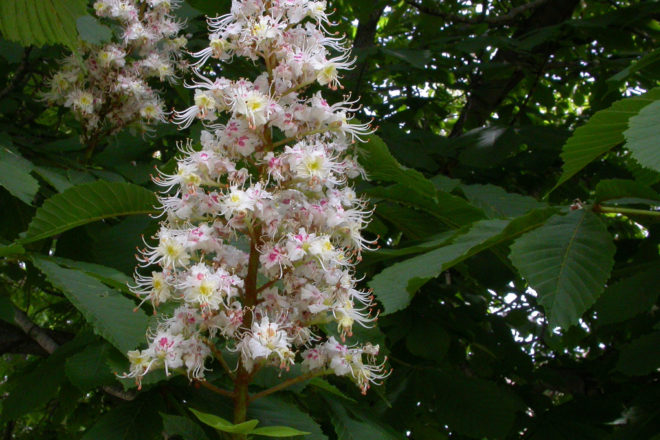 Flowers of the horse chestnut tree can stand up to 10 inches tall. Photo by Roy Lukes.

There is an ornamental deciduous tree that is quite spectacular when it blooms in the late spring, and its compound leaves provide dense shade during hot, summer days. It’s the horse chestnut tree. It is not as widely grown as it was during the last century, but it can still be seen in many parts of the country.

You may have heard of the Ohio buckeye tree. That is in the same genus, Aesculus (ES-kyoo-lus) – from the Greek god of medicine – as the horse chestnut. Buckeye trees are native to this continent and come in a variety of species such as the California and sweet buckeye, found in the Appalachian Mountains; and the red buckeye, which is common in the South.

The scientific name for the horse chestnut is Aesculus hippocastanum, and it is in the soapberry and lychee family known as Sapindaceae. Settlers introduced horse chestnut trees centuries ago, and they are native to Greece and Turkey. A few other varieties are the Indian horse chestnut, found in the Himalayas; and the Japanese horse chestnut.

Don’t confuse this species with the American chestnut tree, which a fungus wiped out about a century ago. You probably know the “chestnuts roasting on an open fire” line from the holiday song. Those roasting chestnuts came from the native American species, but horse chestnuts are not edible. In fact, they are poisonous.

There have been some uses of the horse chestnut for medicinal purposes, but extreme care should be taken because ingesting the raw nut can be fatal. The bitter poison in them – esculin – causes severe gastrointestinal problems in humans. The nuts are also poisonous to cattle, horses, sheep and chickens, and they have been found to cause colic in horses. Wild deer, however, seem to have no ill effects from eating them.

Even the young tree shoots are poisonous to farm animals, and honeybees can die by feeding on the flower pollen. So, if you raise honeybees or have neighbors who do, it would be wise not to plant a horse chestnut tree in your yard.

The old name for the heavy horse chestnut seeds is “conkers.” Little boys would throw them in some of their games. The prickly seed capsule falls from the tree in the fall, and the smooth, hard nut is inside.

The tree has large, compound leaves that fan five to seven leaflets out from the stem. The large tree bud opens in the spring and contains not only the leaf, but also the colorful flower spike as well. The flower cluster stands upright on the branch and can be as tall as 10 or 12 inches.

The horse chestnut is a hermaphroditic-flowered tree, meaning that the tall spike has both male and female reproductive organs in the same flower. The opposite of that is dioecious: plants that have male and female flowers on separate plants.

The horse chestnut is often referred to as a “messy tree” because it drops its many flower parts as summer nears, then its huge leaves and spiked nuts in the fall. Its autumn, its leaves are not as colorful as those of trees growing in Great Britain, which turn a brilliant yellow. One record of a horse chestnut tree planted in England in 1664 was still growing more than 300 years later and had reached a height of 125 feet.

My research led to some interesting sources of the name “horse chestnut.” One theory has it that a mush made from the nuts was formed into a poultice and placed on the lower legs of horses to heal wounds. Another idea was that beneath each side bud on a twig is a large, rounded leaf scar from which the leaf has fallen. It looks somewhat like the hoof of a horse, complete with seven prominent, dark dots that resemble the heads of horseshoe nails.

When you admire the beautiful color and grain of chestnut wood, that wood is not from the horse chestnut, which is considered quite inferior, but rather, it is from the American chestnut. My late husband, Roy, and I camped in the Great Smoky Mountains and marveled at the houses, barns, furniture and appliances made entirely from American chestnut wood.

For about 300 years, roughly between 1600 and 1900, most barns and houses east of the Mississippi River were made of American chestnut wood because of its great abundance and durability. Within 40 years after the accidental introduction of the dreaded chestnut blight on Chinese chestnut trees in 1904, the estimated 4 billion American chestnut trees were dead.

This was considered the greatest forest disaster in the entire world. Craftspeople today must be satisfied with reclaimed American chestnut lumber and planks obtained at considerable cost. Researchers are working to develop blight-resistant American chestnut trees, so maybe they will make a comeback.

This story reminds us of how important using and preserving our native horticulture is. The fact that the gorgeous horse chestnut tree flowers are toxic to honeybees (which also are not native) and the nuts are poisonous to many other creatures should persuade us to plant only native trees that our native insects can safely pollinate.