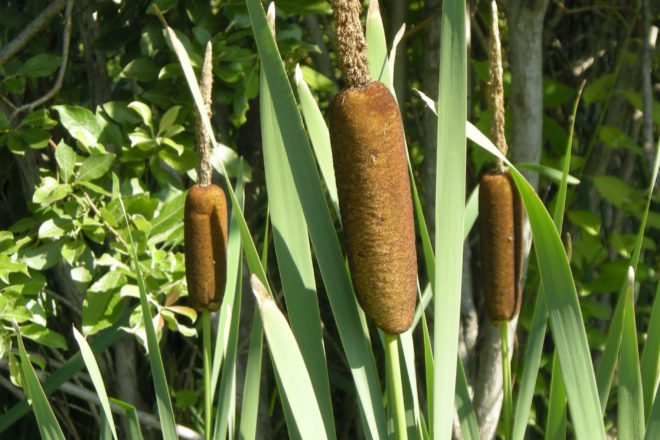 The wide brown section is made up of pistillate flowers and the narrow upper part has the staminate flowers, which will be blown off in autumn, leaving a naked thin stalk. Photo by Charlotte Lukes.

We had a very wet spring with the heavy snows of April and lots of rain in May (5.25 inches) so marshes, streams and roadside ditches had plenty of moisture. That promoted good conditions for the cattails to grow.

I remember when Roy and I lived in the upper range light at The Ridges, more than one car would stop in fall and the driver would get out, look nervously in all directions for anyone nearby, dash to the edge of the ditch to cut a handful of ramrod stiff cattail heads, then scoot back to the car with his “prize” and speed away.

Yes, it is the head of the plant that is named the tail! And would you believe that there can be as many as two million seeds packed into that interesting form? Roy collected one entire six-foot-tall plant one day and brought it home to dissect all the parts.

The stiff, strap-shaped leaves had a rather waxy feel and were amazingly light in weight. Frequently the leaves of some cattails extend up to beyond the tips of the seed heads. The heads, when young, consist of a compact mass of male, pollen-bearing flowers composed of two to seven stamens each.

Being extremely primitive plants, these flowers have neither sepals nor petals. Following the discharge of their pollen, the flowers wither and fall off, leaving behind the thin, bare spike extending a few inches above the late autumn and winter cattail heads familiar to so many people.

Female flowers, their ovaries elevated on miniature stalks, are packed tightly together, making up the so-called cattail. Long hairs are attached to the stalk of each pistil. There are about 15 to 20 hairs forming each silky parachute that can carry a seed in the wind for many miles. Legend has it the some North American Indians carried these fuzzy seed hairs with them into battle, throwing them into their enemies’ eyes to temporarily blind them. 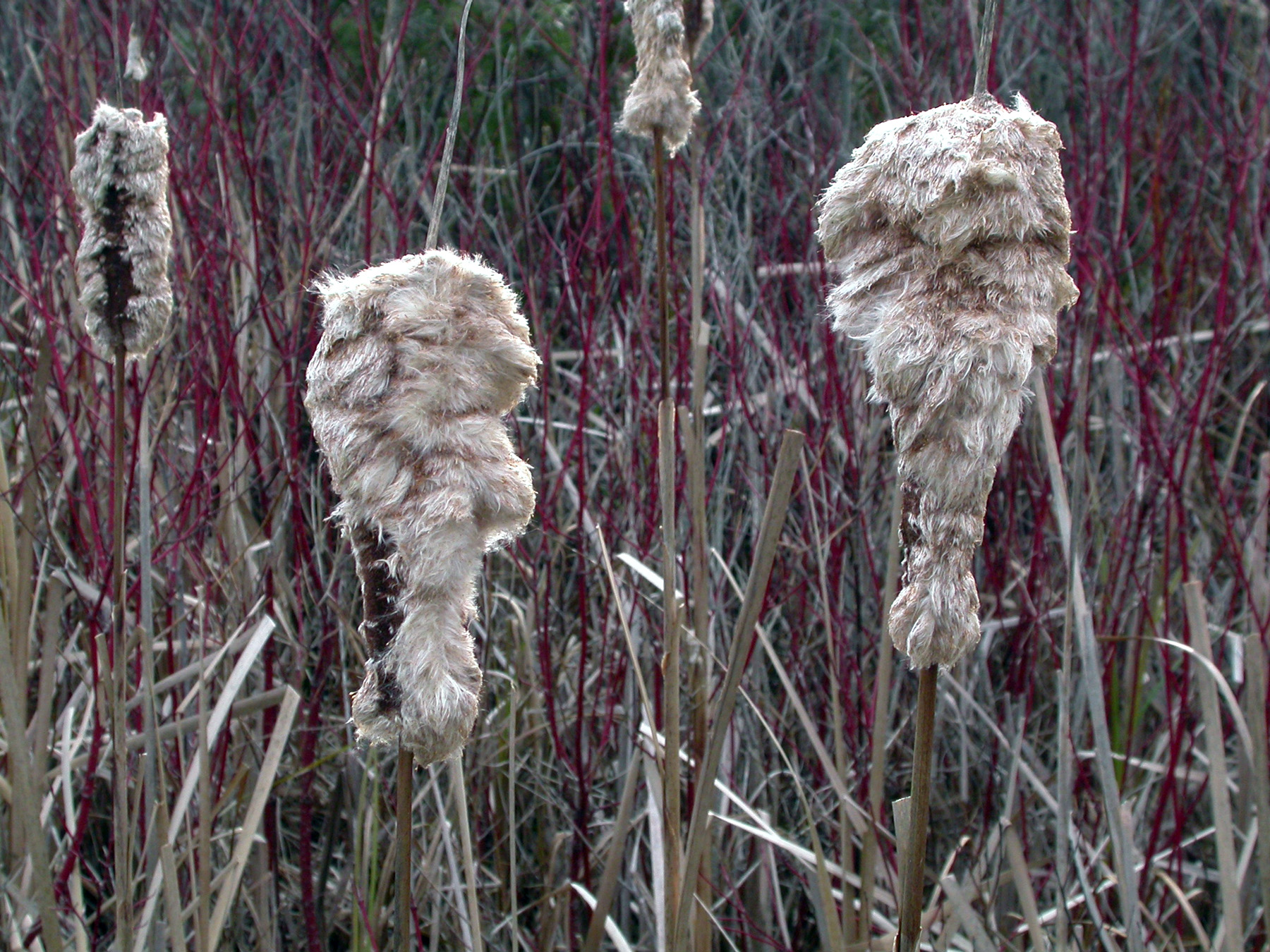 These plants were attacked by the cattail borer moth, Bellura obliqua. Photo by Roy Lukes.

The seeds are so small that not many animals use them for food. One of the few on record is the blue-winged teal duck. A number of other animals, including geese and muskrats, do eat great quantities of the starchy roots. Cattail stalks and leaves become building materials for the muskrats’ lodges and the nests of various marsh birds, including the marsh wren, yellow-headed blackbird, red-winged blackbirds and least bitterns.

Margins of lakes and streams, wet ditches and the shallow portions of marshes throughout much of North America are the typical habitats of the lowly cattails. They are frequently regarded as undesirable, fast-spreading weeds, especially where duck-breeding habitat is placed above that of the least bittern and yellow-headed blackbirds.

The incredibly huge underwater biomass of an extensive cattail marsh, such as one of the state’s largest at the Horicon Marsh, can do a marvelous job of filtering and cleaning up the water, helping immeasurably to improve the purity of the underground water that eventually may be used by the people of that region.

There are several varieties of cattails in our continent. The broad leaf is the most widespread growing from Alaska down to the southern borders. Narrow leaf cattail can be found in northern Canada but does not grow as extensively there or in the Gulf States where the southern cattail thrives.

A hybrid has become quite common in much of our country. It is a mix of the narrow leaved (Typha angustifolia) and the broad leaved (Typha latifolia). It is the species that Roy often called the non-native since it was introduced from Europe. The hybrid version is primarily a sterile perennial aquatic herb. It reproduces by rhizomes and through clone formation.

When ripe, the spike bursts open in dry weather and releases the tiny fruits which are covered with fine bristly hairs. That feature helps them to be distributed far and wide for germination. As the fruit contacts the water it opens rapidly releasing the tiny seed which then sinks.

Optimum seed germination occurs in as little as one inch of water but can happen in areas as deep as 16 inches. Cattails can grow from three to 10 feet tall at maturity.

I remember Roy telling one of my favorite stories of his work at The Ridges Sanctuary. He was leading a regular tour in the sanctuary when they paused on one of the wooden footbridges between two trails. It so happened that a number of aquatic plants were growing close to where they were standing.

All of a sudden a 4-year-old spied some large cattails and loudly exclaimed to his father, “Look dad, hot dogs – and on the stick!” Everyone laughed and enjoyed the small lad’s perfect description of one of America’s most well-known wild plants.

Rutherford Platt, in his excellent book This Green World, describes them as “those curious tall plants that look like sausages on top of wands growing in swamps.” Platt, an experienced outdoor writer, and the innocent little pre-kindergarten boy had very similar thoughts.

On Sept. 2 Charlotte Lukes will present a new slide program at Newport State Park called “Animals of Land and Water,” as part of Newport Wilderness Days. This free program begins at 1:30 pm in the Nature Center at the main office building. A vehicle sticker is required.