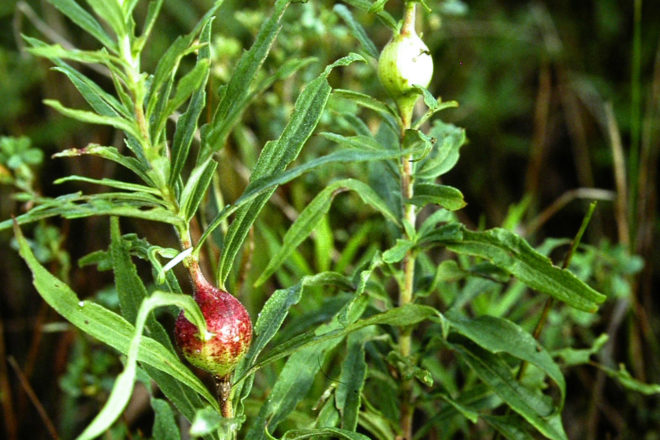 These round ball galls are the result of the insect Eurosta solidaginis setting up a home for the next generation in the stems of tall native goldenrods. Photos by Roy Lukes.

October is the month of many changes. It begins with hopes of enjoying colorful autumn leaves, and before the month is over many have been blown off the trees.

During a recent nature class that Don Quintenz and I were teaching at Björklunden, Lawrence University’s northern campus, we examined some goldenrod galls. These are commonly found on the tall goldenrod, Solidago gigantea, and the Canada goldenrod, Solidago canadensis.

A very small female fruit fly, Eurosta solidaginis (you-ROW-sta sah-li-DAY-gi-nis), which we call either the goldenrod or the ball gall fly, begins to lay eggs in the stem of these plants quite soon after they emerge in spring.

Once the egg hatches the tiny white larva, called a maggot, slowly eats its way down into the middle of the very top of the stem below the flower bud. It only consumes the soft pith in the center and does not injure the critical water-conducting tissues of the outer stem. The chemical reaction produced by the maggot triggers the formation of the gall around the inner chamber.

The tall goldenrods seem to be the host for this gall. Experts say the Eurosta fly actually uses taste buds on her feet to distinguish the species of goldenrods she prefers. Another point related to the term “fruit fly” is what most people call a fruit fly is actually a pomace or vinegar fly. Pomace is the residue left after fruits have been pressed for juice, and this attracts and is eaten by the incredibly tiny pomace flies.

Returning to the ball gall maggot inside its very secure round home, all summer this little white creature eats and slowly gains size. By mid-September the maggot begins to excavate its escape tunnel for the next spring. It is usually done in the upper half of the gall and by late October the tunnel is completed up to, but not through, the paper-thin outer shell. 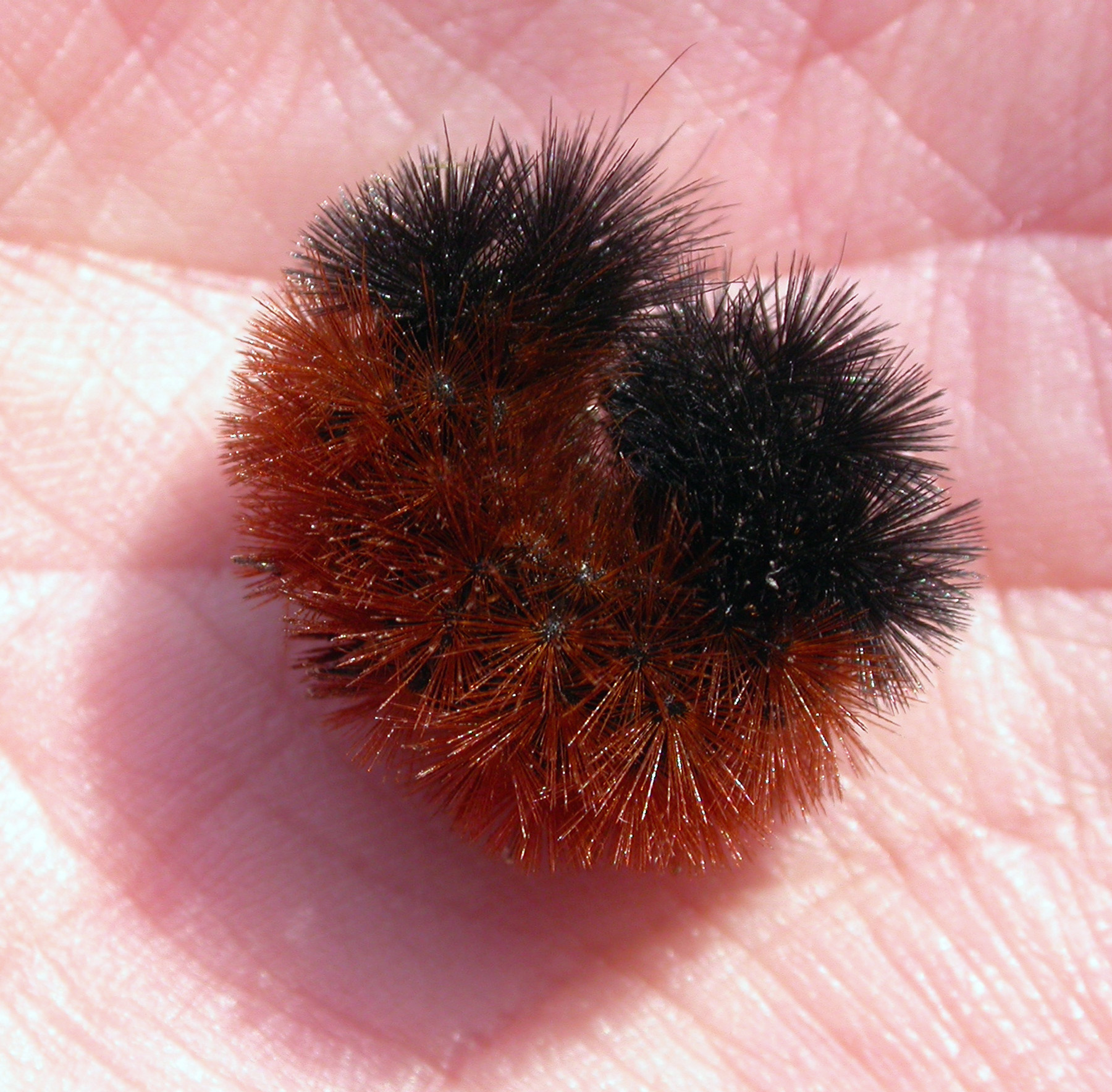 Now is the time to see the woolly bear caterpillars on the move before winter sets in.

This escape tunnel is absolutely vital because the adult ball gall fly that will emerge next spring has no way of eating its way out of its chamber to the outer world. Once completed, the larva crawls back to the center of its chamber and decreases the water content in its body, thereby shrinking in size. Now ice crystals will not be able to form in its body, which would destroy it.

Incidentally, it is common for downy woodpeckers and chickadees to peck into these galls during winter months to eat the tiny maggots. Holes made by a woodpecker will be quite narrow, while those made by the chickadees will be less refined and more conical in shape.

Come spring, the larvae in these ball galls will pupate, and by April or early May the adult Eurosta flies will be ready to emerge. Each of the adult flies has a tiny inflatable “battering ram” on the front of its head that is used to force its way out of the chamber it has lived in for the past 50 weeks.

By this time the new tall goldenrod plants have begun to grow. The adult goldenrod Eurosta flies will mate and the females will lay eggs in the newly forming plants and begin this amazing cycle all over again.

Even though we have never made actual counts, the woolly bear caterpillars seem to be everywhere in some years. My guess is that more people know this caterpillar than any other. What they may not know is that woolly bears will spend the entire winter in this form, continue to eat next spring, and finally pupate and emerge as an Isabella moth. This moth has a wingspan of about two inches. The slender forewings are a rich tan and the rear wings are light yellow. Females are darker than the males.

Carefully touch the hairs of this larva and you’ll find they are not soft and woolly but rather stiff and bristly. Color variations of the reddish-brown and black bands don’t predict the severity of the approaching winter. Instead, they reflect the caterpillar’s age and other variable factors. Young caterpillars will have narrower brown bands than the older ones.

At least four well-known species of butterflies in this area also spend their winter in the larval or caterpillar form. They are the northern pearly eye, great-spangled fritillary, viceroy and white admiral. What is truly amazing is that once the eggs of the great-spangled fritillary hatch, those extremely tiny larvae eat one meal of grass leaves and then head down into the duff lying upon the forest floor. There they will remain, having had only one meal, until next spring when they will resume their eating.

Quite a few of the butterflies that are recognized by many people will spend the winter in the chrysalis stage. Included are the spring azure, black swallowtail, tiger swallowtail, cabbage white and the common sulphur.

For some unknown reason, perhaps our previous very cold snowy spring, the large silk moths of our area were considerably down in number compared to other years. Theses sharp dips in population are known to periodically occur with many other moth and butterfly species. All of the four silk moths will overwinter in the cocoon stage. They are the cecropia, luna, promethea and polyphemus.

And now one comes to that wonder of wonders, those frail butterflies of this area that are capable of spending the long cold winter as adults. Unlike the popular monarch butterflies that, like miniature “snow birds” will spend the winter south of the border, eight of our hardy species crawl behind a piece of loose tree bark or squeeze their way into a woodpile, and stay put.

Regardless of the stage in which moths and butterflies spend the winter at this latitude, they aren’t as frail as we think they are!