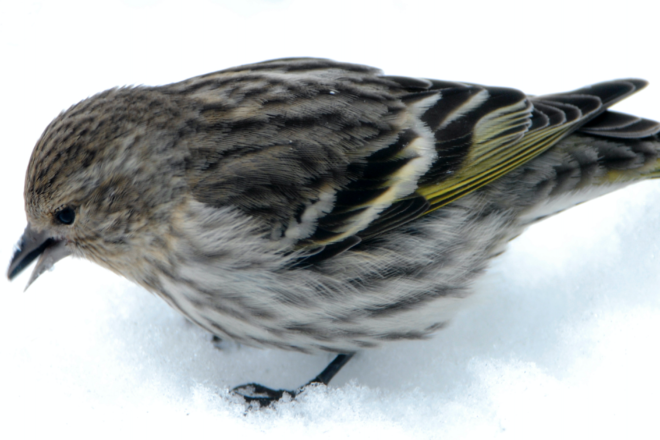 Against a snowy background, a pine siskin shows its finely striped plumage with some yellow in the wings. Photo by Roy Lukes.

Every autumn, I watch for the winter finch prediction that’s sent to the subscribers of Wisconsin’s email birders’ group. The forecast this year was rather bleak, with not many of the sought-after migrants expected to arrive here this winter.

When natural food supplies such as conifer cones and deciduous tree seeds are in short supply in Canada, birds that depend on them for winter sustenance must travel to areas where they can find enough food to stay alive. That’s when we see species in the finch family arrive in our area.

Some winters, we’re blessed with redpolls, pine grosbeaks, crossbills, evening grosbeaks and Bohemian waxwings in search of food and shelter. We used to get hundreds of evening grosbeaks in the early 1970s. Now they’re rarely seen, and only in a few spots such as Washington Island or far Northern Door.

One species made a very noticeable appearance this year in much of Wisconsin and the Midwest: the pine siskin. The first few – at someone’s feeder – were reported in northern Door County on Aug. 17, but by Oct. 3, I counted 43 pine siskins in my yard!

These birds nest in coniferous forests from New England to Michigan and Wisconsin. In fact, the first Atlas of Breeding Birds of Wisconsin, completed in 2001, had records of them nesting in more than 20 counties in the state. They also nest in the mountains of the West and across Canada.

In some years, there’s an irruption: a sudden, sharp increase in the relative number of a population, as in an invasion. After these irruptions occur – usually in autumn and throughout the winter – some pine siskins may find a good food source and remain to nest. That could be why some southeastern Wisconsin counties had confirmed nestings in the late 1990s.

I received an email from a reader asking about these tiny, rather tame, streaked birds at his feeders. He noticed how much they eat at the thistle feeders and how tame they are when he goes out to refill the feeders.

It was about 40 years ago – when my late husband, Roy, and I lived in The Ridges’ Upper Range Light – when we had so many siskins in the yard. Roy went out to fill the feeders and found one pine siskin that was so tame that he was able to capture it in his bare hand and carry it into the kitchen so that I could sketch it. The bird was calm and did not complain. When Roy took it back outside, it flew to the feeder and continued to eat. Most of these birds live in remote forests where humans are not seen, so they have no natural fear of us.

They can survive in extremely cold conditions by increasing their metabolic rates by 40 percent above other birds of their size. They also put on roughly 50 percent more winter fat than similar birds, such as redpolls and goldfinches.

Pine siskins are a communal species rather than solitary feeders. They can swoop into an area with 30 or 40 of their own and dominate the yard. Then suddenly they fly off together, as if a signal had been given.

Autumn arrival dates for Door County during the last eight years range from Aug. 17 this year to Nov. 10 in 2016. None were observed during the winter of 2013. Their high, buzzy calls can alert birdwatchers to their presence, often in hemlock or paper birch trees, whose seeds they seem to relish.

I remember the Christmas bird count of Dec. 20, 1980, when the total number of pine siskins recorded was 1,388. During the following two years, no siskins were seen. Common redpolls are another species of similar size that can show up on Christmas bird counts in great numbers one year and then be absent for the next few years.

We used to have several nyjer thistle feeders hanging in the front yard. Some years the redpolls did not arrive here until February, perhaps after their food supply in the far north had been exhausted. That may also occur when extremely heavy snows and cold in Canada cause them to move here in mid-winter.

We counted more than 90 redpolls feeding on the thistle seed at one time in March 2004. That was the greatest number of this species I had ever seen.

Who knows what this winter will bring and which conditions in the far north will influence which birds to visit our feeders? Just be prepared to welcome them with enough food and daily fresh water in your heated bird bath. Then enjoy these invaders from the north!