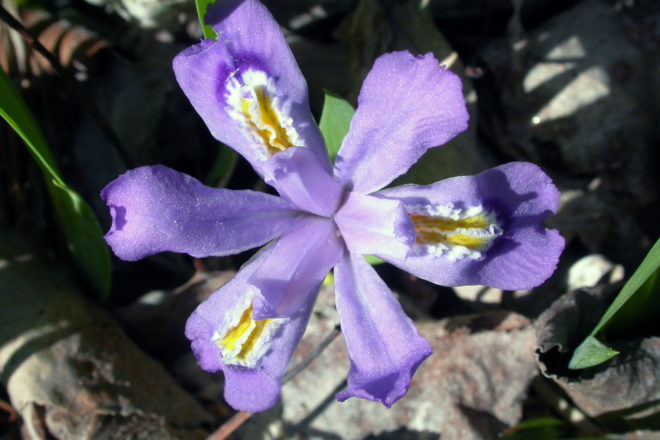 The lake iris is a threatened, protected species in the northern parts of Lakes Michigan and Huron that grows at The Ridges Sanctuary and other shoreline areas of Door County. Photo by Roy Lukes.

I remember the fabulous flower garden that the father of Roy, my late husband, had at his home in Kewaunee. Some of the plants that he shared with us were the light-blue-flowered cultivated bearded iris. He called them the Great Lakes variety. The Iris genus was named for the Greek goddess of the rainbow, so it’s fitting that in garden catalogs, you can find these plants in a large assortment of color combinations.

Our area is known for the diminutive lake iris, Iris lacustris, which is a protected flower of The Ridges Sanctuary. It can also be found in a few other places in our county, but it’s not a common plant. Many books call it the dwarf lake iris. Roy felt it demeaned the plant to name it “dwarf,” and there is no “giant” lake iris, so the term is not necessary.

Iris lacustris is also called the Great Lakes iris. It was first found by botanist Thomas Nuttall on Mackinac Island in 1810, and Michigan chose it as its official state wildflower in 1998. This species – only two to three inches tall – is on both the Wisconsin and federal threatened lists. It also grows in Canada on the Bruce Peninsula and on Manitoulin Island in Ontario.

A similar small iris is the crested iris, Iris cristata, which we found in the Smoky Mountains. It is three to six inches tall and is more common in the southeastern part of the country.

Many of you know the wetland plant called the blue flag iris. The Wildflowers of Wisconsin and the Great Lakes guide lists two species for Door County. The more common is Iris versicolor, growing two to three feet tall in wet or semi-wet conditions. Its deeper purple-blue flower is up to four inches wide. The other species, Iris virginica, which grows up to three feet tall, has a slightly paler flower that’s about three inches across. Canoeists may encounter them along the edges of streams and inland lakes, and there may be a few growing in The Ridges and our state-park wetlands.

Another member of the iris family – the blue-eyed grass – grows more on grassy roadsides in the upland interior of the peninsula. The Wisconsin Herbarium online guide lists two species for Door County.

The genus name of Sisyrinchium (sis-e-RINK-e-um) is derived from Greek and refers to pig and snout – apparently because of the animals grubbing in the soil to eat the roots of these plants. The two species listed for Door County are campestre (cam-PES-tre), meaning “of the prairies,” and montanum (mon-TAN-um), meaning “of the mountains.” S. montanum grows more in the northern part of Wisconsin; S. campestre is more common in the southern half.

Field guides tell of both having stems that are unbranched and distinctly winged. Even though the common name is grass, it is not in the grass family. The plants can grow as tall as 20 inches, and their leaves are so narrow that they appear grass-like.

These plants have star-shaped flowers with six pointed tepals. When a flower has tepals, it usually means that the sepals and petals are very much alike. In the case of the blue-eyed grass, the three petals are just a bit narrower than the three sepals. Each tepal has a sharp point at the tip and a small indentation on each side of the tip.

S. montanum – also called American blue-eyed grass and strict blue-eyed grass – is native to much of the northern part of the continent from Alaska to Newfoundland and southward to Pennsylvania and west to the mountains of New Mexico.

It’s not easy to find these flowering plants because they blend in with the roadside grasses in late May to early June along quiet backroads with wide, grassy shoulders. Examining the blue flowers – which are less than an inch across – with a magnifying lens lets you see their intricate beauty.

Seed catalogs carry them, so you have the opportunity to enhance your native-wildflower gardens with these perennials that don’t require much care. There are so many non-native invasive plants in the landscape that we should not allow to overtake the native species. Do more to preserve native wildflowers, shrubs and trees because they also help the native insect, butterfly and bird populations to thrive.