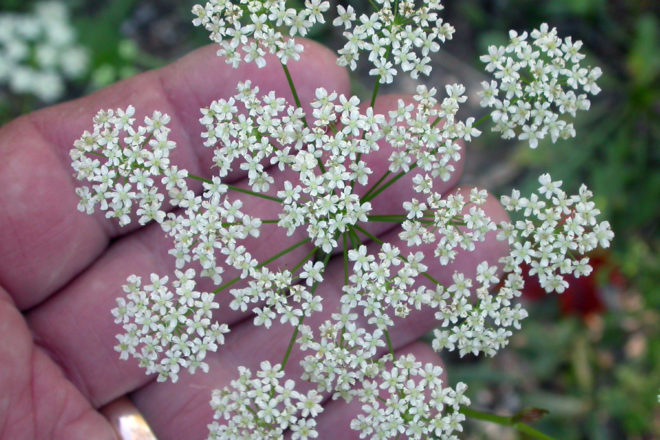 The blossom of burnet saxifrage is more open than the Queen Anne’s lace flower. Photo by Roy Lukes.

The county roadsides are now abloom with the tall, white, umbrella-like flowers of Queen Anne’s lace. This plant – in the parsley family – has been around for many years and is considered a weed.

It was about 32 years ago when my late husband, Roy, and I discovered huge fields of a very similar flower blooming along the back roads of far-northern Door County. One look at them told us they weren’t Queen Anne’s lace, but rather, a similar-looking plant that was obviously in the parsley family as well. We took a few plants home to try to identify them.

The parsley, or carrot, family is a large and confusing group of plants. Some species are aromatic, harmless and used for food; others are poisonous and deadly. Botanists call this group Umbelliferae (um-bel-LIF-er-ee) because its flowers are arranged in umbels: flower clusters in which all the individual flower stalks arise at one point. The cluster is flat-topped or ball-like, depending upon the lengths of the individual stalks.

One of the easiest umbelliferous flowers to locate and examine is Queen Anne’s lace. The individual flowers in an umbel are very tiny. In our mystery plant, a typical umbel had 14 small heads with 20 separate flowers. That amounts to about 280 single flowers per umbel. Potentially, each small flower is capable of producing one seed. Unlike Queen Anne’s lace flowers, which curl into a tight “bird’s nest” as they ripen, those of our mystery plant retained their outspread shape.

None of our common-wildflower field guides listed this plant, so we looked in the three-volume New Britten & Brown Illustrated Flora by Henry A. Gleason and found it.

It turned out to be Pimpinella saxifraga (pim-pi-NEL-la sax-IF-ra-ga), also a member of the parsley family. It can grow two or three feet high and has parsley-like basal leaves, compared to the fine, carrot-like leaves of Queen Anne’s lace.

It is native to Eurasia and an escapee to the North American continent, where it does well from Newfoundland to Ohio and in much of the Northeast. It is also native to southern England and was planted as turf fodder for sheep and cattle. It thrives in Door County’s calcareous soils, and recent reports say that it is now considered an invasive weed in Minnesota.

We sent a plant to a friend at the Milwaukee Public Museum who was in charge of its botany collection. He had no record of it ever being seen before in Wisconsin and confirmed the identity as we had. The common name is burnet saxifrage.

A week later, we returned to the area where this plant was growing and measured a square yard containing 95 flowering plants. Each plant had an average of seven umbels, and each umbel, having 280 single flowers, showed that a single plant might support 1,960 tiny flowers.

A very conservative estimate at that time was that there were at least 200 acres of these very successful escapees. Assuming there are approximately 95 plants per square yard, 200 acres would equal about 91,960,000 plants! You might figure that 180 billion seeds are produced on this 200-acre patch.

Since those days of our first discovery in 1989, we have seen this plant along the roads close to Baileys Harbor and across the peninsula to Egg Harbor. It is here to stay.

The only other member of the Pimpinella genus in this country is anise, Pimpinella anisum (an-EYE-sum). Other well-known members of the large parsley family include celery, carrot, dill, caraway, coriander, fennel and, naturally, parsley.

In the wild, you find Queen Anne’s lace, water parsnip, cow parsnip, poison hemlock, sweet cicely, water hemlock, angelic and parsnip. Socrates and others were put to death in Athens by being forced to drink the juice of the poison hemlock. The wild parsnip, which has become a very troublesome weed in much of the North Country, also has toxic juice capable of blistering one’s skin when the skin is exposed to sunlight.

What fascinating plants exist in the parsley family! The next time you drive past what you think is a patch of Queen Anne’s lace, stop for a closer look. You may be surprised.