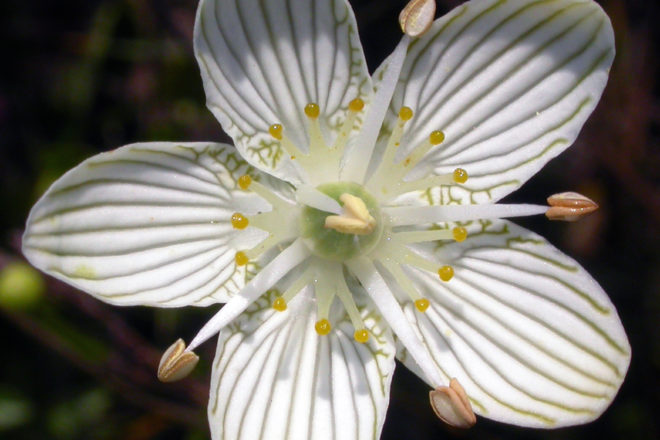 A single grass of Parnassus blossom has intricate beauty and symmetry. Photos by Roy Lukes.

Ladies’ tresses orchids, one of the few wild orchid groups with around-the-world distribution, are slowly reaching their peak of blooming. Wisconsin is fortunate to have three native species:  the slender, the nodding and the hooded.

Their genus name, Spiranthes (spy-RAN-thees), is Greek for coil and flower. Indeed, the numerous individual flowers on some spikes appear to be placed in one or more braided spirals. Here is a tribe of many species that occurs in both hemispheres, primarily in open areas, dry to wet and either acidic or calcareous.

Their white- to cream-colored flowers have a tongue-shaped lip and a captivating fragrance. Some people have compared the odor of the hooded ladies’ tresses to vanilla. Usually their basal leaves are long, thin and pointed, occasionally not appearing until the orchid has finished blossoming. 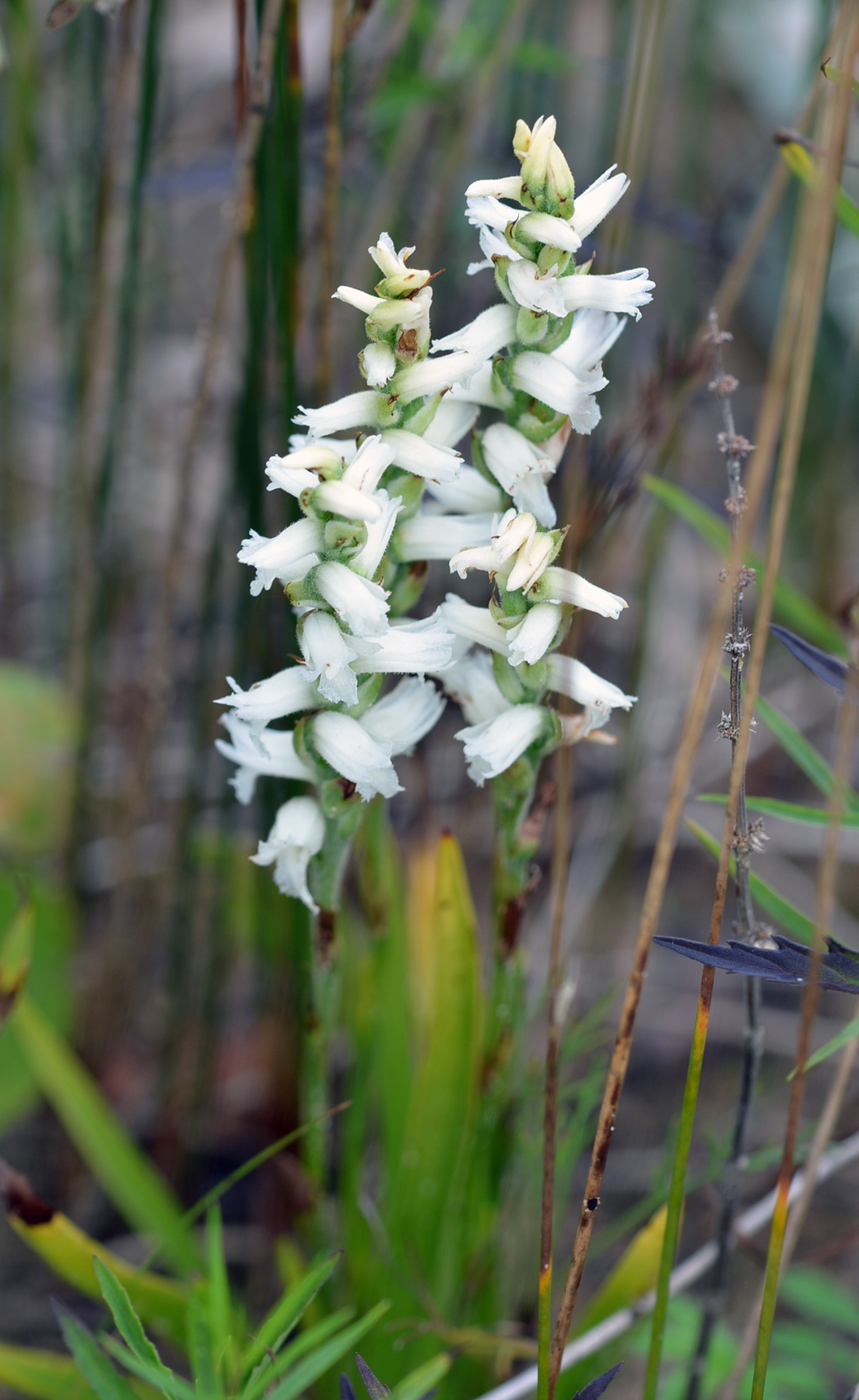 These two stalks of nodding ladies’ tresses orchids show the spiral formation of the individual flowers.

The most widespread species in eastern North America is Spiranthes cernua (CERN-you-a), which means nodding. Some refer to it as the autumn ladies’ tresses orchid. It is possible to find colonies numbering in the thousands. Look for them in wet fields, low beach sand dunes, marl shores where it will grow in with various sedges and even along limestone ledges where soil and sufficient moisture are available.

There are several wet, limy ditches within sight of Lake Michigan where we go in early September to search for these small, interesting orchids growing along with spotted jewelweed, boneset, Kalm’s lobelia, purple gerardia, fringed gentian and especially the grass of Parnassus.

The grass of Parnassus surely should be included among the most perfectly geometric and beautiful of all wildflowers. Its name can be traced back to mythology surrounding the once holy 8,000-foot Parnassus Mountain in Greece. The historians say it was sacred to Dionysus and the Corycian nymphs.

Our most abundant species, Parnassia glauca, named for its blue-green foliage, is an intricately veined, five-petaled, pale yellow-green, star-like flower. Its petals form a shallow cup aimed straight up to the sky and are situated at the end of a slender, foot-long, grass like stem, hence its name. Its small oval leaves are clustered around the base of the stem. They emerge out of the ground by mid-summer and look like clusters of small green spoons for several weeks until finally the flowers begin to appear.

In order to really enjoy this flower’s astounding geometry, one needs a magnifying lens. You will be surprised to discover tiny clusters of yellow-tipped filaments at the base of each petal, three to each petal. Call them false stamens if you wish, because flies or bees are attracted to these abortive anthers, mistaking them for drops of nectar. Really, the true nectaries are located on the other side of these dainty, fringed structures. The insects must get to the center of the flower to feast on its sweets.

Now begins one of those miracles of natural selection. The insects, forced into taking a detour, dust themselves thoroughly with pollen from the younger flowers. Eventually during their time of feeding they will visit older flowers and inadvertently transfer this pollen to their later-maturing stigmas, thereby bringing about cross-fertilization, so important to the eventual development of mutations.

Mutations are vital to the perpetuation of this and other species, enabling them to adapt to slightly changing soil, moisture and temperature conditions from century to century. Now, with global climate change, it may be happening at a more rapid pace. Most surely the mutations of many plants will be highly important in future years to cope with global warming, thereby keeping plant populations alive and thriving.

Should you be able to enjoy the grand fall panorama of fringed gentians and grass of Parnassus, please don’t be lulled into thinking that, due to the large numbers of these wildflowers in a few locations, they can be freely picked. They are much rarer than you think, and not a single specimen should be removed from its native habitat.

I remember Roy telling me of an incident about Miss Emma Toft and her deep reverence for our native plants. The story involved fringed gentians. She was on her way to the Baileys Harbor village from Toft Point when she noticed a man picking gentians along the edge of Ridges Road. She wasted little time in parking her car, then hurrying to inform him that “we love these flowers and don’t pick them.” 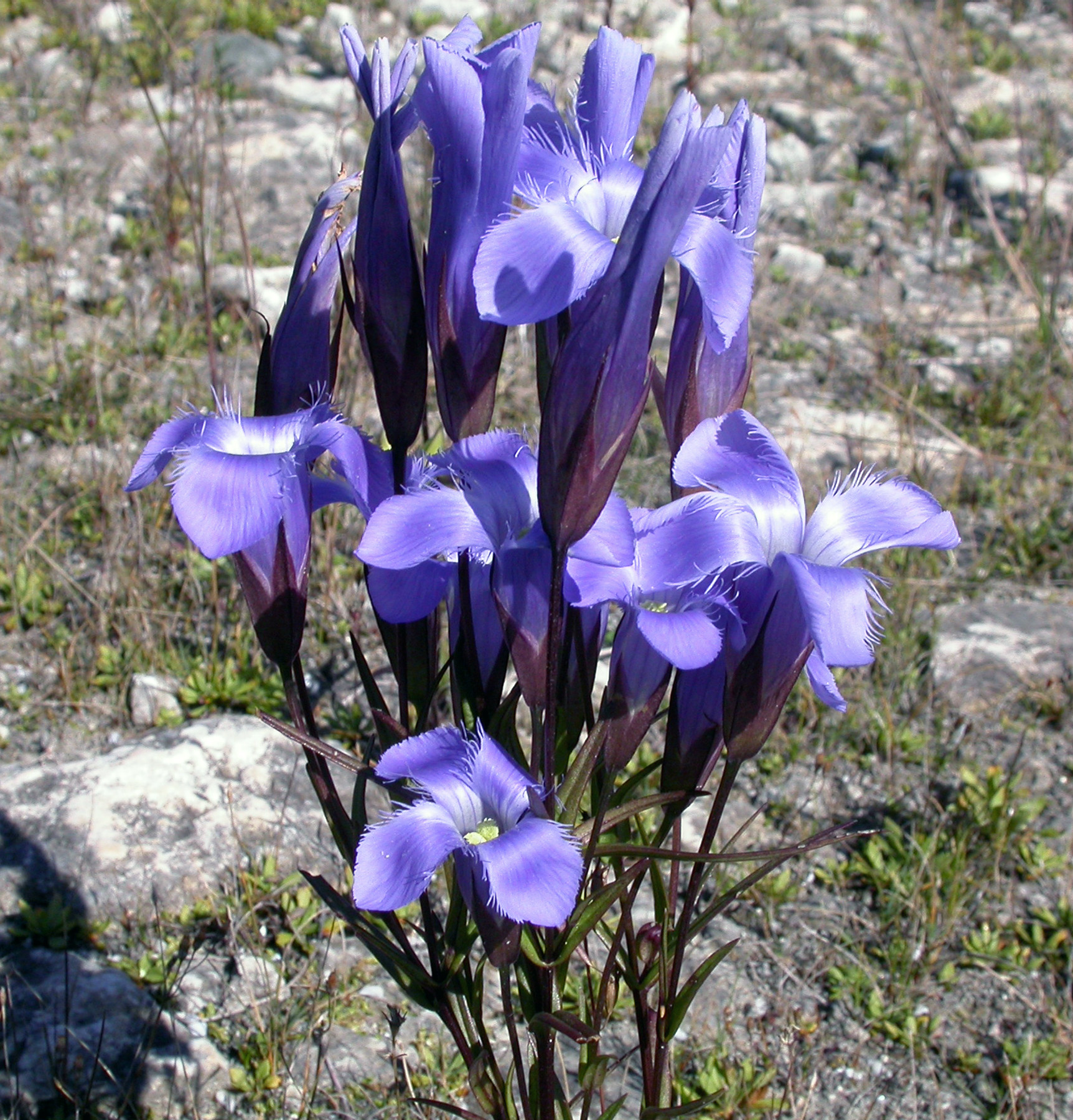 Heavenly blue fringed gentians will open their flowers only on a sunny day.

Finally, in desperation and with all the authority and bite of voice she possessed, she braced up and shouted, “You’re nothing but a damned hog!” The man stopped in his tracks, perhaps not wanting to believe what he had heard, looked up at Emma, threw the gentians to the ground, wheeled around and drove away. He had received precisely what he deserved!

Later, Emma told Roy, “I had to use the language he understood!”

Enjoy the fringed gentians and the grass of Parnassus “stars,” but in such a way that hundreds of people following you will be able to enjoy them just as you have, year after year.