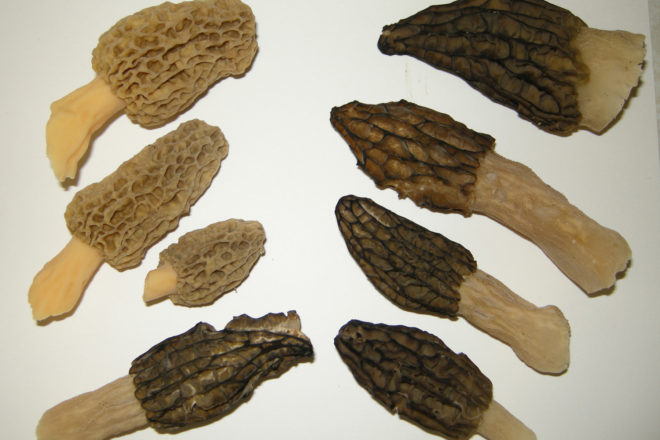 Here is a selection of brown and black morels found in the middle of May. Photo by Charlotte Lukes.

Door County has had good years and bad years for finding the true morel mushrooms. If we have a snowy winter with lots of spring rain – which replenishes soil moisture – it will usually be a good season for finding morels. However, spring must also have warm weather to help the process.

Last year we had heavy snow in April and lots of rain in May, but that month was so cold. A friend told me the soil temperature on Memorial Day was only 50 degrees! I did not find any morels in my favorite spots. Having good soil moisture, a hot spell, rain and then a cool-down is ideal for producing morels. “Hot” weather in Door County in May is a rare thing!

The black morel, Morchella angusticeps, can appear about a week before the brown variety. I have seen the black morel as early as late April and often in an area where conifers are found. Experts caution that some people become ill when eating the black morel.

It’s very important to cook any mushrooms you plan to eat. Some friends went along with my late husband, Roy, and me one day in May many years ago when we collected 16 pounds of morels. I cut and cleaned our eight pounds, then dehydrated most of them. Our friends went home and indulged in a huge meal of cooked morels. They became ill. Overeating mushrooms can make you quite sick because they’re hard to digest in a large quantity.

If you want to collect and eat wild mushrooms, it’s vital that you learn about any poisonous species that might be confused with the ones you want to eat. The false morel grows in Door County, sometimes in the same places and at the same time as the true morel. The genus of false morel is Gyromitra, and most specimens contain a toxic substance called monomethylhydrazine – a component of rocket fuel.

History tells of many European mushroom hunters who died after eating some Gyromitra species. The true morel has distinct pits and ridges and a hollow center. The false morel is more irregularly brainlike, without the pits and ridges, and is unevenly solid and hollow when cut in half.

The toxin, called gyromitrin, is distilled off when the mushrooms are boiled, so the cook, standing close to the pot, can become ill by inhaling the vapors. The poisonous effect is enhanced with greater quantities of mushrooms consumed. Other toxic genera to avoid are Helvella, Peziza, Sarcosphaera and Verpa.

All morels can cause stomach upset if consumed raw, and the black morel has brought on illness when consumed with alcohol. Any mushrooms – well cooked – should be considered condiments or added flavorings rather than entire meals.

I’ve found the semilibera in Door County only two times in 47 years of hunting. It’s distinctive in having a small pitted and ridged cap near the top of a tall, pale, tan, hollow stalk. The common name, half-free morel, comes from the lower half of the cap being unattached to the stalk. It can be confused with the toxic Verpa species, so be careful.

Mushrooms are 80 to 90 percent water, and their growth responds to extended periods of rain. I lead mushroom hikes at state parks, and the usual turnout is about 12. During the remarkably wet summer of 1993, 44 enthusiasts showed up! There was so much rain that year that people were seeing mushrooms everywhere and wanted to learn more about them.

Invest in a few recently published mushroom field guides so that when the weather is giving us rain, you can be prepared to hunt for the elusive morel. People have asked where we found 16 pounds of morels, and we said, “In a woods between Sheboygan and Gills Rock!”