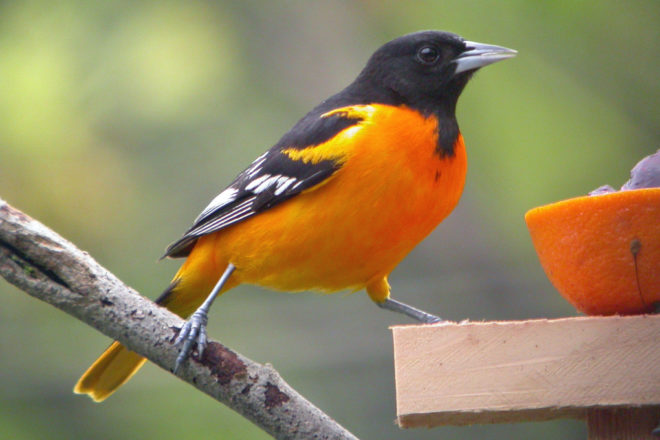 After the second year, a full adult male Baltimore oriole has the bright orange and solid-black plumage that most people recognize in the species. Photo by Roy Lukes.

A few weeks ago, my bird feeders were like O’Hare Airport. Well, not exactly, but there were so many rose-breasted grosbeaks, woodpeckers and blue jays landing and taking off that it was difficult to supply enough food for all the hungry adults and newly fledged youngsters.

Now, with most of the breeding season over, the front yard and feeders are much quieter. A couple of species such as cardinals and mourning doves – the longest-season breeders in our area – may still be in the nesting and raising-young stage, and the American goldfinch is also busy with nesting, using thistle down to line their nests and the seeds to feed their young.

The majority of other breeding birds are now going through their postnuptial molt. It’s a trying time because it requires a great deal of energy to grow new feathers. Some birds studied were found to lose as much as 40% of their body weight during this critical part of their lives.

It also happens over a period of several weeks for some species. Purple finches even require about 10 weeks to complete their postnuptial molt. While undergoing this change in plumage, birds are more vulnerable and must hide and protect themselves.

How many feathers must be replaced? In the summer, a ruby-throated hummingbird sports about 940 feathers, compared to roughly 1,500 for a white-throated sparrow and up to 25,000 for a tundra swan!

Feathers – the only feature of birds not shared with other forms of life – do not remain on their bodies nearly as long as most people think. My late husband, Roy, learned how to be a federally licensed bird bander from a friend who was a master bander while Roy was teaching in the Madison area in the late 1950s. Here is one of his stories.

During Roy’s first autumn of banding, he had taken a dark-eyed junco out of a mist net and was preparing to put the lightweight, numbered, aluminum band on its leg. The junco suddenly fluttered its wings and began to fly away. Roy tried to grab it but was not successful. The bird was gone, and all that remained in Roy’s hand was the tail feathers.

He watched the junco and realized, however, that it could fly well even without its tail. He later learned that the lost feathers would immediately begin to grow back, and the tail – which acts as a rudder in controlling some movements – would be replaced within three to four weeks. The loss of the tail feathers did not hinder the bird’s ability to fly well.

Most birds acquire their natal down after they hatch. There are exceptions, though, such as blue jays. This down is quickly replaced by fluffy juvenile plumage. It is during this period that baby robins and bluebirds show spotted breast feathers, have achieved their full growth and can fly. Then, all but their wing and tail feathers, in a regular sequence, gradually fall out and are replaced by their first winter plumage.

It can be frustrating to bird watchers and banders that in many species, young males and females look alike. Both male and female flickers, for example, have a black mustache during their first winter plumage, but as adults, only males sport this field mark.

Ducks are another interesting story. Once egg-laying has commenced, they go into such a drastic molt that all of their flight feathers are lost, rendering them earthbound. Being able to swim and dive allows ducks to find food and evade predators, however, and the somber, mottled, eclipse plumage of the drakes provides excellent camouflage. Just when their flight feathers grow in, they begin their second molt. At that point, the drakes take on colorful winter and breeding coats.

During the spring after their birth, some first-year males such as the Baltimore oriole, rose-breasted grosbeak and red-winged blackbird lack the feather brilliance of second-year or older males. When both sexes have undergone their first prenuptial molt, then mating, territory defending, and singing take place.

Nesting over becomes the “doldrums” for both birds and birdwatchers, but be patient. It happens every year. In a few weeks, things will be back to normal, and if birds can be happy, I’m sure they will be – and so will birdwatchers!

Since May, there have been reports of a mystery bird disease in some Eastern states and as far west as Indiana, but no reports have come in for Wisconsin as of this writing.

The disease affects the eyes of mostly robins, grackles, starlings, blue jays and cowbirds. It causes redness, swelling and crusty discharge around the eyes and can cause blindness and some neurological disorders. Some birds have died from this malady.

If you see birds with these symptoms in your yard or at your feeders, it would be wise to stop feeding the birds and disinfect your feeders with a 10% bleach solution. It is also important to thoroughly clean and disinfect bird baths.