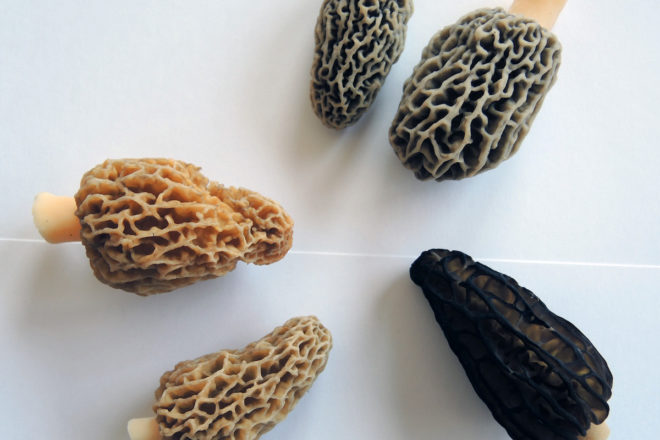 Here are examples of (clockwise from top) gray, black and yellow morels. Photo by Roy Lukes.

I remember seeing a brochure once that proclaimed, “May is Morel Month in Michigan,” but that’s true for most places where these fungi grow. It really depends more on weather, soil moisture and the preferred habitat of these sought-after gems.

Someone we knew years ago hunted wild turkeys in southwestern Wisconsin each spring and found great quantities of these mushrooms while doing so. There are certain areas where morels seem to flourish, but Door County’s cold springs and rocky soil mean that this area is not one of them.

The best conditions for morels to flourish include good winter snow cover, abundant spring rains, a warm spell and then, finally, more rain in May. One year this happened, and two friends joined us on a hunt. We picked 16 pounds of morels in one day, divided our harvest and parted ways.

I cleaned our mushrooms, sliced them in half top to bottom and dehydrated most of them. Our friends went back home, cooked and ate many of theirs in one meal, and got sick. Too many morels are difficult to digest — a lesson they learned the hard way.

When seeking wild mushrooms to eat, begin by learning which similar species are poisonous and may be growing at the same time. Never just compare a picture in a field guide to what you see growing. Try to hike with a local person who has extensive knowledge of the types that grow in your area.

There are seven major toxin groups found in wild mushrooms, and some can kill you. Many toxins make you miserably ill. The effects of others may not show up until hours or days after consumption, but some of those toxins are lethal.

Invest in a good, recently published mushroom field guide for your area. Read the introductory pages to gain a thorough understanding of how to study wild mushrooms. When on your hike, take notes about how mushrooms grow and on what. Study their habitat, and identify the trees that grow within 50 feet of them.

Most fungi have a direct relationship with certain trees. The actual vegetative part of the mushroom, called the mycelium (my-SEE-lee-um), grows its fine threads in conjunction with the roots of surrounding trees. They live in a symbiotic relationship, each helping the growth of the other.

Taxonomy is a method of classifying and ordering the biological world. Scientific study over the centuries has developed the names of the plants, animals and all the other elements of nature. Mushrooms are included in this and have been undergoing extensive DNA study, with some renaming, during the past 30 years.

Morel mushrooms have been classified as the yellow, black and gray species in common terms. Recent genetic studies reveal that there are 22 species in North America. The Latin names, Morchella esculenta and M. elata, are not even considered American species. Those names originated in Europe, and what we have here are completely different species.

But most people don’t care what the scientific name is — they just want to learn how to identify morels and pick them in the spring. My records indicate that the black morel can sometimes appear a week or two before the yellow ones, but I’ve found both growing at the same time in mid-May.

The most important feature to know is that all true morels are hollow from top to bottom. The pits and ridges on the outer side of the cap are slightly different in the species. Black morels have ridges that are distinctly vertical, and the pits and ridges of the yellow morel appear in a more haphazard pattern.

Some people have become sick when eating black morels. It may be that they’re harder to digest or were not cooked thoroughly enough. All mushrooms must be cooked well and never eaten raw. It’s also good to consume them in moderation, never overeating them in one meal.

I mentioned true morels because there are also false morels that appear at the same time. False morels are very different in form and not completely hollow. They have a bumpy surface that does not have the pits and ridges of the true morel. They also contain a carcinogenic chemical — a component of rocket fuel called monomethylhydrazine — that can cause death when eaten.

Another unusual species is the half-free morel. I’ve found it only two or three times during the past 48 years, and even then, I saw just a few. This mushroom has a long stalk with a small, round cap that has pits and ridges like other true morels, and it’s attached to the stalk halfway up the inside of the cap.

Just like blooming plants, wild mushrooms have their individual season. You never find true morels growing during the fall, when the greatest quantities of other species appear. The time span for finding true morels stretches from mid-April into early June during a wet spring.

So get out to look for true morels and enjoy the warming weather of May. Take a walk in a favorite part of your homeland to see what’s growing in your yard, under trees or in a local park. Remember that eating wild mushrooms can be a joy or a big mistake. Be very careful about picking a wild mushroom, and if in doubt, don’t.