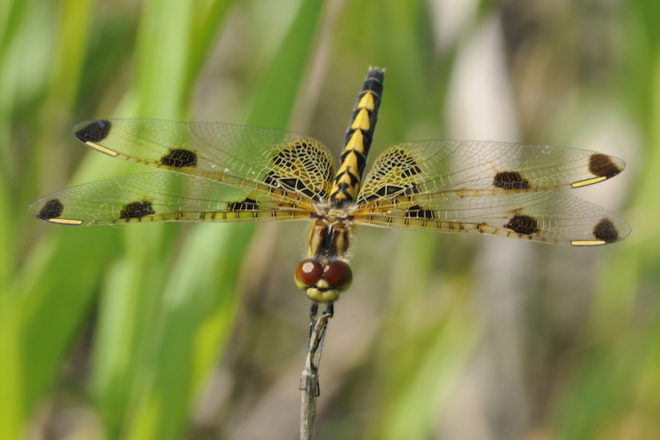 The female calico pennant dragonfly has a yellow and black abdomen and is fairly common in marshy ponds. Photo by Roy Lukes.

The summer skies over most wetlands can be laced with rapidly flying creatures that are difficult to identify. These are dragonflies that feed on many small, flying insects.

You cannot easily determine their identity unless they come to rest on a plant or object near you. Dragonflies are in constant motion, courtesy of pairs of wings that move rapidly and allow them to hover, fly backward and do amazing loops in order to catch their prey.

They cannot bite or sting — they don’t even have a stinger. But, they are surely fearsome to the scores of small insects they catch and consume during their short life spans as adults. As insect predators, they are great controllers of the mosquito and black-fly populations — thus the reason some people call them “mosquito hawks.”

Aeronautical engineers have studied the flight of dragonflies and have found that as their front wings move downward, their rear wings move upward. It is thought that this increases efficiency and produces more stable flight. They can hover, rise, descend and fly backward and forward as they patrol the ponds and wetlands for their next meal.

After two dragonflies mate, often while flying together in a connected “wheel” pattern, eggs are laid in the water. Some eggs hatch within a few days, but others may overwinter and hatch the next spring. The larvae live underwater from one month to as long as five years.

A dragonfly begins its life as a savage, little predator, eating small creatures in the water, including mosquito larvae. The nymph, called a naiad (NY-ad), has quite a formidable lower lip: large enough that it folds backward between its front legs, about one-third of its body length. It is capable of lashing out with lightning speed to seize victims such as mayfly naiads, crustaceans, tadpoles and even small fish.

Eventually the naiad crawls up the stem of a nearby plant. Slowly, its exoskeleton splits open down its back, and a wet, soggy dragonfly emerges. The wings and body must dry completely before the little spitfire can take flight. From then on, however, it will be strictly a creature of the air and earn its reputation as a voracious predator. It won’t go anyplace unless it can fly there.

These amazing insects belong to the Odonata family, referring to the toothed jaws of adults and nymphs. Certain species perch more than others, and how they perch can help in identifying them. They sit with their body in a horizontal position or angled upward, depending on the heat of the sun. Others, in the category of darners and cruisers, tend to perch vertically. It is also important to note the type of structure or plant on which they perch.

The eye color and spacing are helpful to observe, as well as the colors of the three main body parts: the head, thorax and abdomen. In some species, males have a different color on the abdomen than the female, and juveniles can be completely different in their color patterns. The colors of the face, forehead and eyes are important to note, as are wing spots and whether the wings are shiny or dull.

There are six families of dragonflies in Wisconsin. Skimmers have the greatest number of species at 36, with 25 of those seen in Door County. Clubtails are the second-largest family with 32 species, but there are only four in our county. The third-largest family is the emeralds, of which the Hine’s emerald is the most famous. Nine species of this family have been documented in our area.

The other two smaller families are spiketails and cruisers, each with only three species in the state. Two spiketails have been seen in Door County, but no species in the cruisers realm. The smallest dragonfly in our state is the elfin skimmer, at just three-quarters of an inch long. In fact, it is the smallest dragonfly in the U.S., found only in far-northern Wisconsin.

One of the most frequent and largest species in our area is the common green darner, which is about three inches long. That family of darners has 19 species in the state and eight recorded in Door County. The largest in this family is the rare swamp darner, at 3.4 inches in length.

Identifying these rapidly flying insects can be difficult unless you have close-focusing binoculars. The best type focuses as close as four to six feet.

There are several great books to help you identify what you are seeing. Dragonflies of Wisconsin is an excellent softbound guide by Karl and Dorothy Legler, with Dave Westover. Another good field guide is Dragonflies of the North Woods, a smaller soft-cover book by Kurt Mead.

To photograph dragonflies, you must have a camera with a 100- to 200-millimeter macro lens for close focusing. Some new digital cameras and lenses have built-in anti-vibration features that enable you to obtain remarkably clear handheld images.

Just the names of some of the dragonflies known to be in Door County are enough to excite the imagination: the dot-tailed whiteface, blue dasher, common green darner and calico pennant.

Please consider observing, photographing and enjoying dragonflies to be a privilege — and with privileges come responsibilities. Do what you can to help preserve the clean, healthy wetlands that are so critical to the life cycle of these magnificent creatures.

A dazzling, jeweled flier in the summer sunshine, the dragonfly has earned its rank near the top of all winged insects by spending months on the murky bottom of a sluggish stream or pond. Watching dozens of dragonflies as they execute spirals, loops, zigzags, stalls and other amazing aeronautical maneuvers in their insect-capturing feats proves to be an exhilarating, memorable summer adventure.