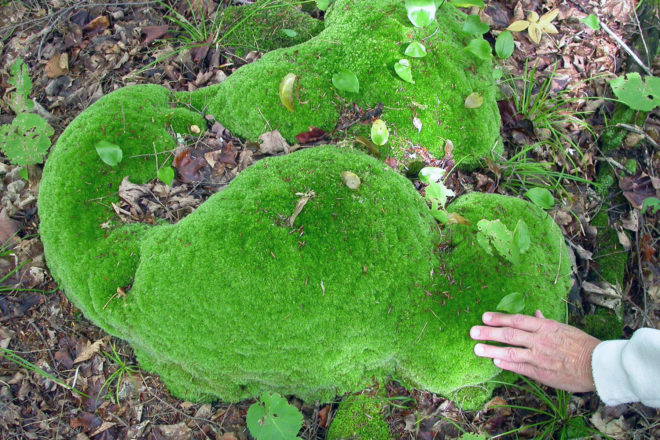 I’ve been interested in mushrooms for many years, ever since finding a blue one on the first Saturday of October, 1972, during our members’ hike for the Ridges Sanctuary Annual Meeting. The variety and colors are simply astounding. They reproduce by spores and are in the group of plants that are called “non-flowering.”

The large number of plants in this group includes, of course, the fungi, lichens, algae, club mosses, ferns, mosses and liverworts. All of these are spore-producing and some have chlorophyll and others do not. None of these form seeds like the gymnosperms do.

This article will concentrate on mosses and liverworts. The mosses come in many shades of green and take on interesting shapes. You can be assured that once you get down on your knees to closely examine some of these unusual and primitive plants, that their almost endless variety of forms and the places in which they grow will captivate you.

Together they form the phylum called Bryophyta which is divided into two classes, the Musci (mosses) and the Hepaticae (liverworts). The chief difference between some of the simpler Bryophytes and the more advanced algae is in the more complex reproductive structures of the mosses and liverworts.

What sets mosses apart from wildflowers, trees and ferns is that they have no vessels or ducts to conduct fluids and nutrients, do not have roots and they contain very simple stems and leaves. It is during one stage of their life history that they reproduce by spores rather than by seeds. Most species are very small, require much moisture in order to live and reproduce properly, and most often will be found growing on soils, rocks, the bark of trees or on fallen decaying logs, in shaded environments.

Perhaps mosses are telling us something in the fact that very few kinds grow in the vicinity of big cities. They, along with lichens, rarely tolerate the air there. If you really want to experience mosses at their very best, hike into an old-growth forest on a drizzly day. Locate a fallen log that is virtually covered with several different kinds of mosses and you can easily visualize how these ancient plants are helping to hold moisture in the slowly decaying tree which, in turn, benefits numerous other organisms. In reality this moss-covered tree has become an intricate natural little community teeming with life. 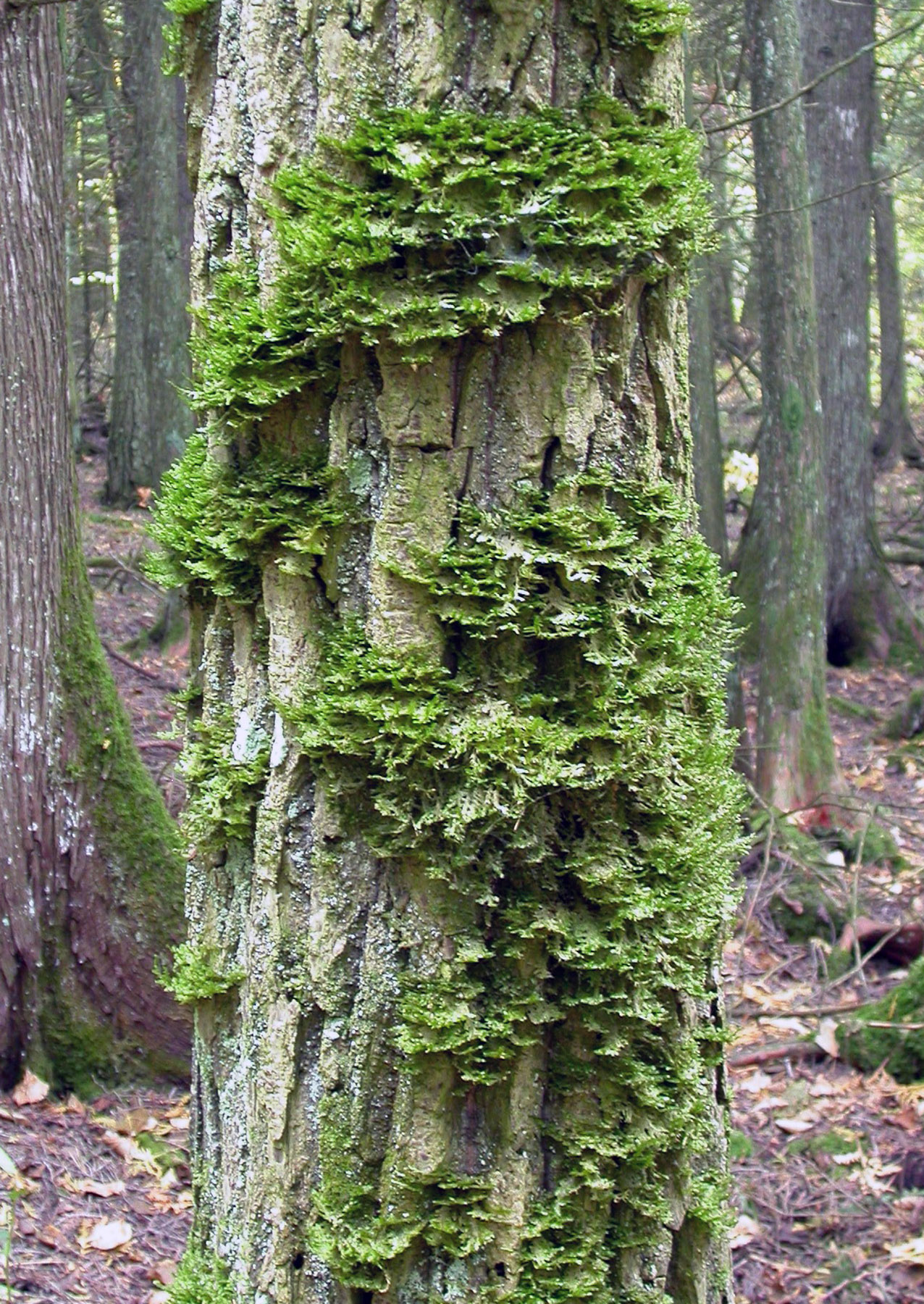 It is during the spore-producing generation of mosses that thin wiry stalks are formed, each having at its top a spore-containing capsule or urn. The capsule of each species is very distinctive and helps greatly in the identification of the plant. A hand lens is very useful when examining the intricate features of these capsules, along with the leaves of the plant.

A favorite, easily identified species of moss is called the hair-cap moss, based on the tiny, pointed, hair-decorated cap, or calyptra, covering each spore capsule like a miniature umbrella. One of the hair cap mosses we find in eastern Wisconsin, especially in dryer sites, is the juniper hair cap moss. Jokingly we used to tell people that if you turn the scientific name of the juniper hair cap moss on end, Polytrichum juniperinum, (po-LIT-ri-kum ju-nip-er-EYE-num), it will be longer than the moss stalk with its capsule is tall!

A look at the roughly 560 species of mosses in Wisconsin tends to lead one to the conclusion that they are of very little value. In reality they have the ability to absorb great quantities of moisture, highly important in days of water conservation and flood control. They are also very effective in the prevention of soil erosion. Being pioneer plants, they also help produce the soil that eventually will support the growth of trees and other vascular plants. Perhaps the most valuable and widely known of all mosses is the sphagnum moss, widely used in plant nurseries and gardening.

One of the most gorgeous of all the mosses I have studied is the knight’s plume moss, Ptilium crista-castrensis, aptly named in reference to its ostrich plume-like shape, suitable to adorn the crest of a knight. Its species name, cresta-castrensis, means “crest of a soldier of the camp.”

Hike into a humid eastern white cedar woods and you will surely find some of the trees adorned with shelf moss, Neckera pinnate, whose delicate leaves curl slightly upward. Some of the growths appear to actually spiral skyward around the trunks.

Don’t be led to think that moss grows only on the north sides of trees. Depending upon how a tree may be leaning, which in turn dictates where most of the falling rain drains down the trunk, there you will very likely find the best moss growth.

The shape of some mosses naturally suggests easily remembered names. One is the pin cushion moss, Leucobryum glaucum. This species has the habit of turning whitish-green in dry weather, alluded to in its scientific name. “Leuco” is Greek for whiteness, and “glaucum” in Latin means silvery, like the frosty glaze on grapes.

One of the most common mosses you will come upon in some woods is well named, the shaggy moss, which is considerably like a shag rug. It reminds me of an unmade bed with its leaves rumpled and twisted in all directions. 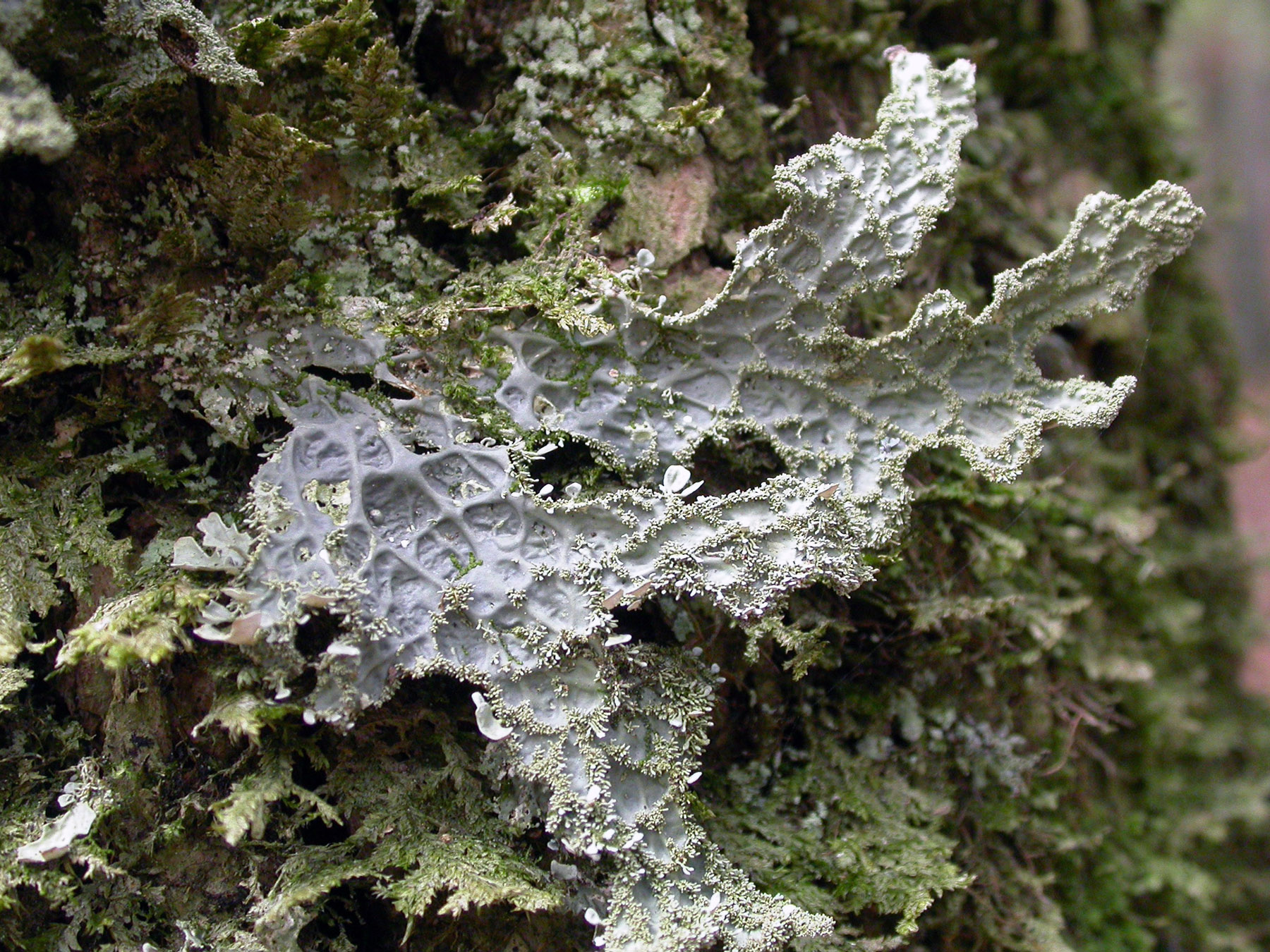 A liverwort, Lobaria pulmonaria, has distinctive shapes and edges.

A moss that is dainty and beautiful in its fern-like form is the delicate fern moss. This species produces spore capsules sparingly, usually in early autumn, but the shape of each plant is very easy to compare to a tiny fern.

A typical liverwort has a flat leaf-like structure at its base. These have small cups on their upper surface in which tiny buds, or gemmae, form. From these buds new plants develop asexually. In addition, some of the broad thallose liverworts have small erect stalks that support bottle-shaped structures, or archegonia, in which large egg cells develop.

Other stalks bear the male reproductive structures, or antheridia, in which many free-swimming sperms are produced. These sperms transport themselves through a film of water, supplied by rain of dew, until they reach the neck canal of the female reproductive body. Once inside, they contact the egg cell and a stalk with a spore case at its tip develops. These are scattered by the wind and new liverworts develop from them.

One of the most interesting liverworts that Roy and I have seen is the lungwort, Lobaria pulmonaria, which can be found in the damp conifer forests in eastern Door County. Its texture is quite varied and can be either green or gray. Mosses and liverworts often can be found on the same fallen log.

One would have to search far and wide to match the miniature beauty, in the form of mosses and liverworts, growing on the forest floor and on some trees. Slow down your walks through the pine and hemlock woods and drink in the delicate beauty of these small plants.