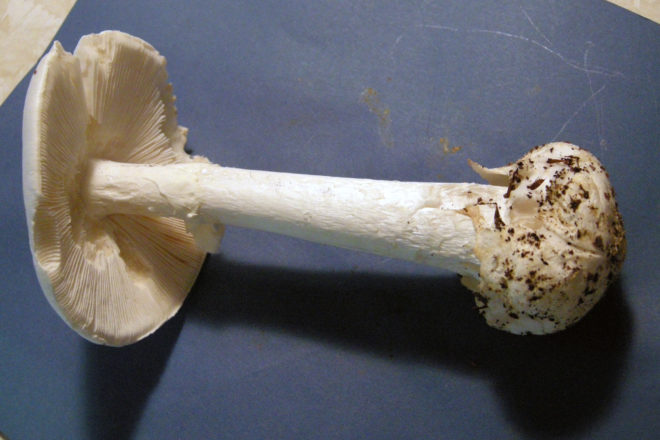 The deadliest mushroom found in Door County is the white Amanita, called the Destroying Angel. You can see the white gills under the cap and the cup-like bulb at the base of the stalk. Photo by Charlotte Lukes.

Many people ask me whether I’m finding a lot of mushrooms, and usually I say that late summer and autumn are the best times to look for them, especially after a rainy spell. In July, 8.25 inches of rain fell in north-central parts of the county, and some nice chanterelles were harvested. Now parts of northern Door County are in a dry spell. All the heavy rains have recently fallen south of us.

I did find a new species for Door County growing in the woods along my driveway during the last week of July. I photographed and collected it, wrote a detailed description, made a spore print and viewed the spores under the microscope. It was identified as Boletus inedulis and is now species number 579 on my county mushroom list.

Wild mushrooms cannot make their own food and must get nourishment from other sources. It seems that as the growing season for flowers, shrubs and trees is winding down, that’s when the mushrooms begin to produce their “fruiting bodies.”

The large, sometimes umbrella-shaped object that we see on the ground or growing on a tree is only the reproductive part of the plant. Mushrooms develop from a hidden section of the organism, called the mycelium (my-SEE-lee-um). That is the actual vegetative part of the plant that absorbs food and water in surrounding soil, decaying trees and leaves and can even live on dead insects.

When there is sufficient moisture, the mycelium develops small nodules on the tissue, which grow into the mushrooms that are above ground: the fruiting bodies. I have eaten about 18 different kinds of wild mushrooms and have found that they vary greatly in flavor and texture.

It’s always important to take many notes on where a mushroom was growing, how it grew, what trees were within 50 feet of it, what odor it had when fresh, any color change that it had when handled or cut, and, importantly, what its host plant was.

Don’t just break it off at the stalk. The entire fruiting body must be dug out of the ground to make sure there is not a “death cup” at the base. Door County has a number of poisonous species, and a few are deadly. Some people who survived eating a deadly Amanita said it tasted good. Those who eat them without knowing what they are doing can die from very painful liver failure.

Mushrooms are part of the larger family called fungi; fungus is the singular term. They all reproduce by spores instead of seeds and do not contain any chlorophyll. There are other plants that have spores – ferns, lichens, liverworts and mosses – but they have chlorophyll.

Rainfall and soil moisture are very important in the growth of mushrooms. In dry years, the mycelium goes dormant. The longer it stays dry, the more rain is required just to bring the mushroom out of its “sleep.” Then more large rains will finally encourage the fruiting body to grow above the ground.

I remember the growing season of 1993, when the entire Upper Midwest was soaked with heavy rain. Many rivers were overflowing, and the earth was “blossoming” with fungi and mushrooms. During that year, we were finding species of mushrooms that had not been seen in 20 years!

My regular mushroom forays at Whitefish Dunes State Park in other years would draw perhaps 10 people. The tour I led in August of 1993 brought out 44 inquisitive hikers because they were seeing fungi all over the place and wanted to learn more about them.

Many mushrooms are not edible. The poisonous species have a range of toxins that can cause gastrointestinal problems such as vomiting, stomach cramps, nausea and diarrhea. If this occurs within an hour or so after eating mushrooms, you will often recover quickly. But there are six other major groups of poisons that can cause more severe damage.

The most dangerous is the poison found in some Amanita and Galerina species, both of which have been seen in Door County. The symptoms don’t reveal themselves until six to 12 hours after ingestion and include all of the above, plus fever, and can last several days. By then the toxins are destroying your liver and kidneys, and death may take another five days of suffering.

Get a good, recently published mushroom book for your area, and read it from the beginning to learn the smart way to identify wild mushrooms. Many of our friends have enjoyed seeing and photographing wild mushrooms, but they’re happy to eat only those found in the grocery stores!