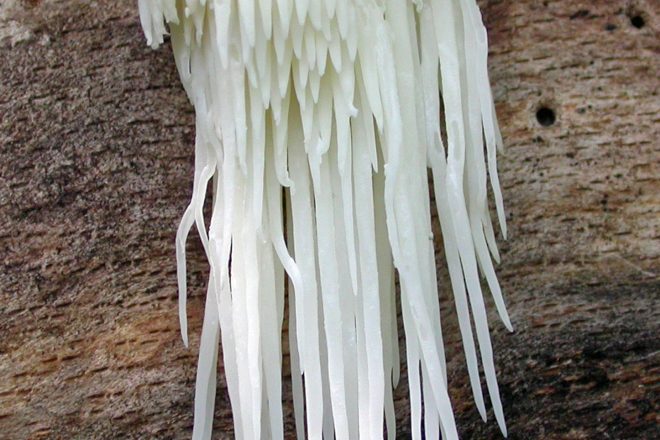 This is a developing bear’s head or lion’s mane mushroom. Photo by Roy Lukes.

Did you know that some mushrooms have teeth? Door County has five genera of fungi whose spore-bearing surface on the underside exists in the form of teeth that look like spines or small icicles.

Several of these interesting growths are quite tough and woody – not something you would even think of chomping on – but two genera have delicate, edible fruitings. We use the term “fruiting body” for the reproductive part of the mushroom. The actual vegetative plant is called mycelium, and it’s hidden in the soil under rotting leaves or in trees.

The great kingdom of mushrooms is undergoing detailed molecular phylogenetic (the evolutionary development of molecules) study, with the DNA features being assessed. The study of some genera has resulted in creating new species names, and many other groups still need to be examined.

Phellodon (fell-OH-den) and Hydnellum (hid-NELL-um) species are the tough, woody types that appear on the ground under conifer trees. They have stalks and caps that grow slowly, and they often fuse with each other and incorporate any plant material in their way as they do so.

Hydnellum species number close to 50 in our country, but there are only a few Phellodon species. You can tell them apart because the latter group has white spores, and the Hydnellums have brown spores. The fruiting body stops growing during a long dry spell, but once heavy rains fall, the white margin of the cap starts growing outward again.

The brown caps may have some rosy or tan colors, and they are either flat or have a shallow funnel shape. The outer edge feels soft while it’s growing, but the center is rough and hard, with clusters of mounds or smaller caps formed on top.

A strange mushroom that often forms high on the trunks of sugar maples or American beech trees is called Climacodon septentrionale, (kly-ma-KO-den sep-ten-tree-o-NAHL). Its common name is northern tooth. At first glance, you may think it’s a polypore, but close examination reveals a dense layer of downward-pointing teeth or spines on the underside.

It forms overlapping shelves and is destructive to the heartwood of a tree. I first found it in our woods in 1990 on a standing beech tree. It has also been seen in Newport State Park, the Mink River Preserve, Logan Creek Preserve and The Rushes’ woods from August until mid-October.

I wish there were greater numbers of the hedgehog mushroom in Door County. It is a good, edible species that is so distinctive that you cannot confuse it with anything poisonous that may look like it because nothing does! The ones I’ve found never grow very large, with a cap only a few inches wide and a short stem. The underside has spines that are delicate and easily broken.

Older books called it Dentinum repandum, but now it goes by the Latin name Hydnum repandum. However, new DNA studies say that H. repandum is a European species. There are also four other species that have been found in our country. It really doesn’t matter; just call it the hedgehog mushroom!

The last major group of toothed mushrooms belongs to the genus Hericium (her-RISH-ee-um). There are three species found in Door County, and all are spectacular to see when they’re fresh and growing. They develop on dead or dying hardwoods, mostly American beech trees.

One called the bear’s head or lion’s mane is a solid mass of long, icicle-like spines that can reach a length of three to four inches. Its scientific name is Hericium erinaceus (air-en-AY-she-us). Some fruitings can grow to weigh a pound during a good rainy season.

A second species has shorter teeth and grows in rounded clusters. The Latin name for this is Hericium americanum. Some field guides don’t have a common name for it, so I call it cauliflower tooth because that is what it resembles.

The third species is called comb tooth because of its delicate branching form and shorter spines. Its scientific name is Hericium coralloides (kor-al-OH-eh-dez). This one is spectacular in some fruitings when the branches become quite long.

All of these are pure white when growing, but they turn yellow as they dry up. They are good, edible species when fresh but become bitter and unpalatable as they age. Even if you don’t find any of these on your nature hikes, just enjoy the wild mushrooms that you do see and realize that they are all important recyclers of nature.