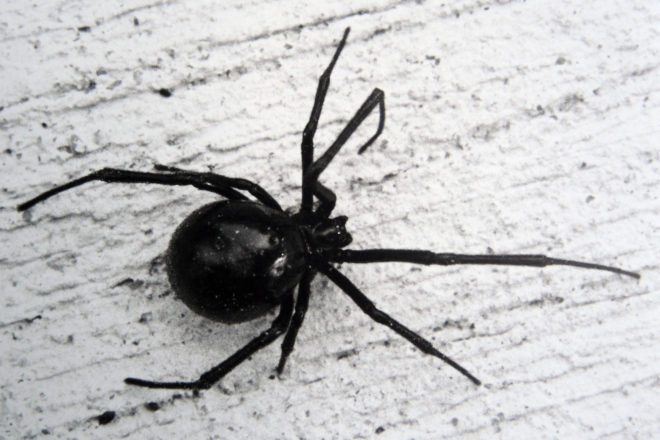 This is the top of a female northern black widow spider. Photos by Roy Lukes.

Many people will be quick to agree that spiders are the most maligned of all small things that creep, crawl or fly. Yet a great majority of spiders will nearly always make every effort, when disturbed, to hide away from danger. Most are shy recluses and few have strong enough mouthparts to bite through human skin.

However, tell a newcomer to your county that black widow spiders may be living at the base of the rock pile near to where they are standing and they will practically do a backward somersault in their haste to leave the area.

Do black widow spiders live in this area, and if so, do they live in close proximity to humans? The answer to both questions is “yes!” Have many people up here ever seen one? No, but if people knew where to look they might be surprised to learn that black widows are fairly common.

To further put you at ease, there were only four human deaths officially attributed to the bites of black widow spiders in the entire United States between 1960 and 1969. Catherine Scott, an arachnologist, said that out of all 1,866 black widow spider bite cases reported to the American Association of Poison Control Centers in 2013, only 14 resulted in any severe symptoms, and nobody died!

When our friend, Kevin Swagel, who works at the Field Museum in Chicago, learned that some northern black widow spiders had been discovered several miles north of our home, he was very interested in capturing one to take to a colleague at the museum who studies these fascinating creatures.

What came as a surprise was the fact that the gorgeous, but extremely secretive spiders were found by a small boy playing near the base of a loosely piled stone fence.

There are three very closely related black widows in North America. They are the southern species, Latrodectus mactans, which ranges from the Northeast states south to the tip of Florida. It has the telltale red hourglass marking on the bottom of its abdomen.

The northern species, L. variolus, whose hourglass marking is very distinct but usually broken, can be found from northern Florida up into southern Canada. It is quite common in southern British Columbia. The western species is L. hesperus. My aunt, who lived in Phoenix, would collect the venom from the western black widow spiders and donate it to a lab, where it was used to make antivenom to treat anyone who was bitten. 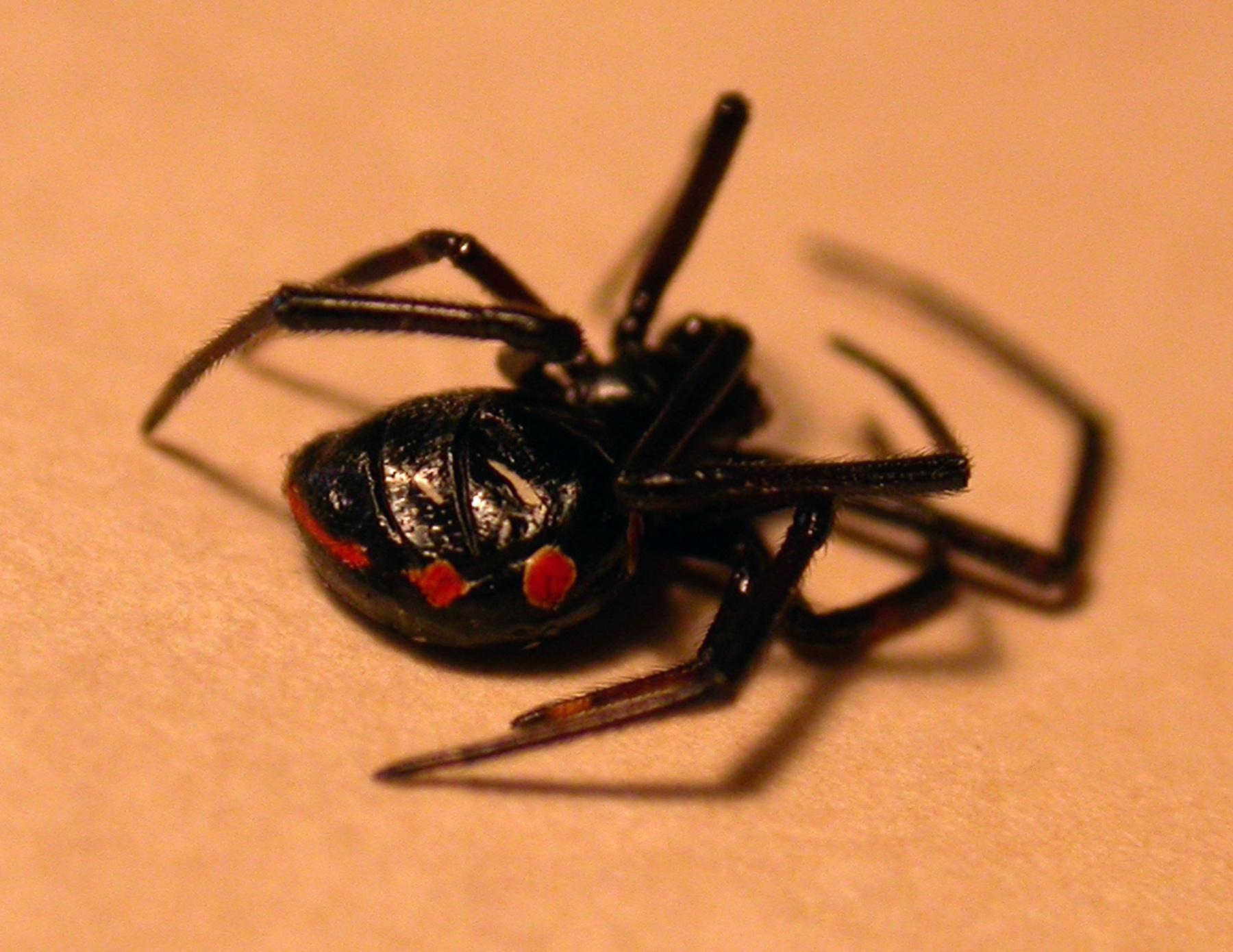 A view of the underside shows the broken red hourglass marks.

Its venom is described as a very virulent and potent neurotoxin that is 15 times as toxic as the venom of a prairie rattlesnake. Fortunately, only a very minute amount of the spider’s venom ever enters a wound of the person who has been bitten. A healthy person usually fully recovers from the bite in two to five days, but for the elderly or very young death may occur within 14 to 32 hours.

After being bitten, one may feel painful rigidity in the muscles of the abdomen and tightness in the chest. There will usually be an increase in blood pressure, a rise in body temperature, nausea and sweating. Death occurred in less than one percent of reported cases.

We were extremely impressed with the beauty of the black widow that Kevin brought to our home to show us. Fortunately, the spider was quite tolerant of being photographed at close range.

But believe me, I jumped nearly five feet when it suddenly made a very quick move in my direction; and so did Kevin. But just that fast, Kevin had the sleek, black female northern black widow carefully recaptured and in safekeeping.

As I said, don’t expect to bump into one of these very secretive spiders in your backyard or under your bed. The fact of the matter is they seldom inhabit houses but rather will be found in undisturbed woods, near the base of wood piles, rock walls or stone piles and possibly in crawl spaces. They prefer to be in dark nooks and crannies that are seldom visited and are sheltered from the weather.

These spiders are active at night and, when found, don’t like to be cornered or trapped, especially when they are guarding their egg masses. It is then that they may rush out and bite, but only upon extreme provocation. Their main reason for biting is to capture food.

The female, which is about 1⅛ -inch long, including her legs, makes a large, stout, very strong funnel-shaped web. An equally strong, three-dimensional “tangle web” is constructed in front of the funnel. It is there that she hangs upside down, displaying her vivid red coloration and perhaps acting like bait to her potential victims.

As one of the so-called “comb-footed” spiders, she has tiny combs of bristles on her hind or fourth legs. When she is alerted by vibrations in the tangle web, indicating that she has caught a meal, she instantly throws liquid silk over the victim to snare it. That allows her to bite it in the hind leg and paralyze it. Only then will she proceed to withdraw her liquid nourishment.

Prey victims include many insects, centipedes, even larger giant cockroaches and small gecko lizards in the South. Both she and her much smaller, differently colored mate, who neither bites nor eats, are also fair game to predators, primarily birds, small lizards and jumping spiders. The smaller male is often eaten by the female. That’s how the black widow got its name.

Rest easy, knowing that a northern black widow spider is not out to get you. On the other hand, be cautious of going barefoot in brushy areas or other likely sites where these small spiders live, and wear gloves when handling firewood or moving stones at the base of rock walls.

Above all, take to heart the greatest lesson in nature:  All life is sacred!