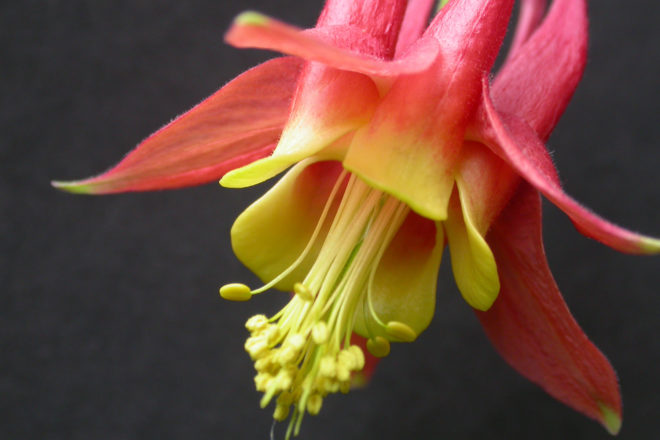 A view into the underside of the blossom shows the yellow edges of the petals and the many stamens. Photos by Roy Lukes.

Quite a few years ago, perhaps in the late 1930s, a nationwide attempt was made to establish a national flower. For a while the top votes went to the rather uncommon dazzling red cardinal flower. Close behind it was a widespread, easily recognized and well-loved flower – the columbine. Unfortunately the federal project fizzled before a decision could be made. You might say the final vote never reached the flowering stage.

During the many years my husband, Roy, taught nature study to the county’s second and third grade classes, he never pumped the names at them. He told the children that long ago someone had to think of a name for each flower and asked the students if it was up to them what name would they give the plant. He encouraged the youngsters to thoroughly examine each flower, including the leaves, and make up their own name. His goal was to lead the children to take close looks at the plants, their shapes, colors, foliage, etc., and many came up with surprisingly good names. The Dutchman’s breeches, for example, often became the tooth flower.

Honeysuckle, meeting house, lion’s herb and rock bells – these are colloquial names from other regions of a wildflower soon-to-be in bloom in the county. Know the wildflower? It’s the wild columbine.

Obviously, it is the airy grace and ornamental poise that may have led to some of its unusual nicknames. Its strikingly long nectar spurs surely attract equally long-tongued moths and hummingbirds, but the flower is not in the honeysuckle family. It is in the buttercup family.

Its name of “meeting house” may have arisen from the five arched nectar spurs on the columbine flower appearing like five people huddled together in a meeting. The Latin word, “columbinus,” meaning dove-like, also reflects five doves in a ring around a dish.

“Lion’s herb” stems from a legend claiming that lions ate columbine flowers in spring to gain strength. The habit of these showy wildflowers to grow in rocky environments, especially where limestone is abundant, led to the name of “rock bells.”

There are about 20 native species of columbines in the U.S. and Canada. One, Aquilegia coerulea, a gorgeous blue and white species, is the state flower of Colorado. The species native to Wisconsin is Aquilegia canadensis, having the typical intricately shaped downward-facing blossoms, red on the outside and yellow on the inside. It is very common in the state and has a rather long blooming season. 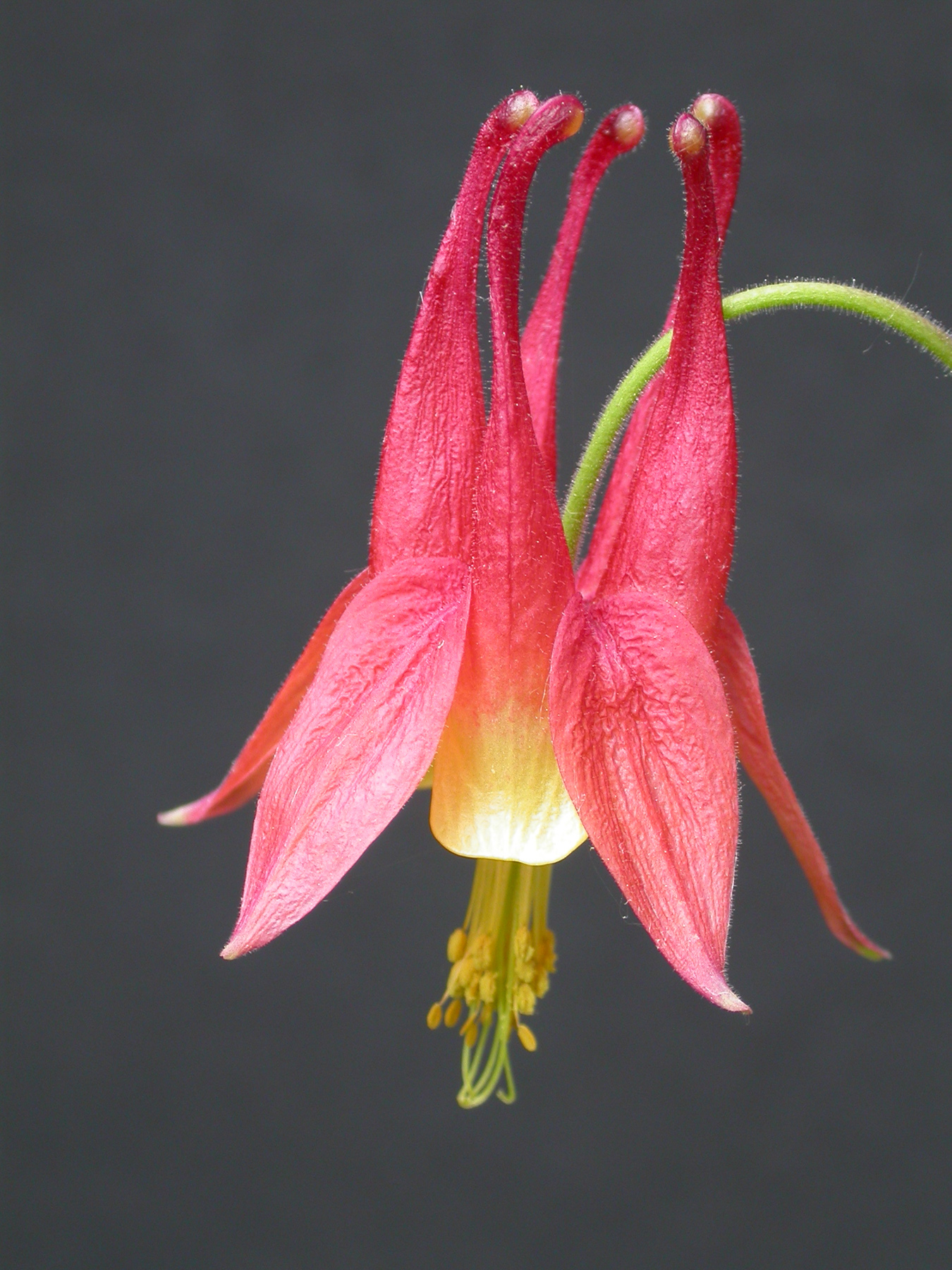 The native columbine found in Wisconsin is a brilliant rose color.

It’s the genus name of Aquilegia, pronounced ah-qwi-LEE-gee-ah, that inspires some interesting interpretation. I’ve already mentioned the dove-like resemblance and its story. Another rendition is that the nectar spurs appear like the talons of an eagle (aquila in Latin). Still another scholar claims the name is derived from “aqua,” meaning water, and “legere,” to collect. Personally, I prefer the dove interpretation, and so do the children and adults who have learned from Roy.

Out west, where columbine species are so commonly associated with rocky environments, they are quite often called rock lilies. All too often our eastern columbine is erroneously referred to as a wild honeysuckle, because in the good old days, children snipped off the blossoms in order to relish the minute amount of sweet nectar.

The fact that the sepals are the same color as the petals means that one must study them closely in order to separate the two. Divided leaves of the columbine, feathery to the eye, have lobes with rounded teeth and are pale beneath. They turn from a light green during flowering to an attractive pink or rose color as they age.

One of the toughest perennial flowers that can be found in a flower bed is the rather weedy blue to purple Aquilegia vulgaris from Europe, which is simply referred to as the European columbine. This introduced flower has escaped from cultivation throughout much of the East. Its blossoms, not nearly as graceful as our native columbine, are about an inch wide and an inch long, and their stamens do not protrude from the flower as elegantly as do those of our native species.

The cluster of dangling stamens protruding downward from our columbine blossoms resembles a yellow tassel. Conceivably one blossom might be looked at as a bell with the dangling yellow stamens being the miniature clappers. Because the stamens hang downward no pollen can fall on the stigmas, which don’t ripen, elongate and become sticky until the stamens on that particular flower have shed all their pollen.

Feathery stigmas now ripen and are situated at the entrances to the five funnel-like petals leading to the nectar spurs. Small bees, bumblebees, hummingbirds and hummingbird moths visiting other columbine flowers whose stamens are ripe will bring pollen to the receptive stigmas.

Upon examining some fully opened columbine blossoms you will very likely discover tiny holes or slits on some of the nectar tubes. Smaller bumblebees or other insects, whose tongues are too short to reach down into the bottoms of the nectar tubes, chew into the sides of the tubes in order to get at the nutritious and delectable nectar. This same phenomenon also commonly occurs on other tubular wildflowers, especially Dutchman’s breeches, squirrel corn and butter and eggs.

After the petals have fallen, the seedpod, now minus the weight of the five petals, turns upward to ripen. The seeds will be firmly contained within the long, slender, five-lobed, urn-like seed pods, in this case called follicles. When ripe, the seeds will be very tiny, black and shiny.

The hardy, dazzling wild columbine, which appears to grow equally well in sunbaked, thin, gravelly soil along the shoulders of roads and in moist shady forests, surely ranks with the most easily recognized and well-loved of all North American wildflowers.