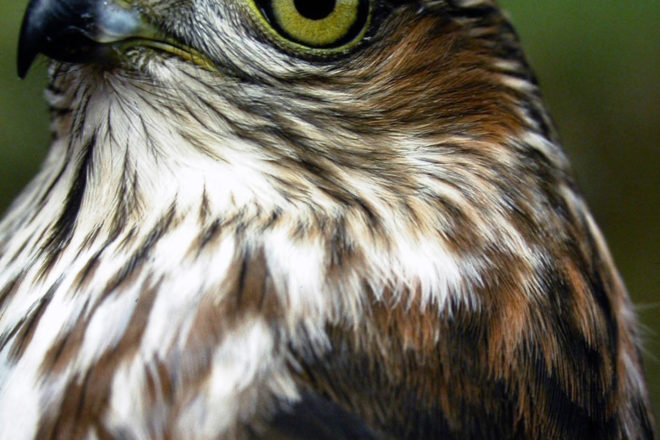 The immature (first-year) sharp-shinned hawk will have a yellow eye and brown-and-white-streaked plumage. Photos by Roy Lukes.

I fill the front-yard bird feeders about an hour before sunset each day so the birds will have “supper,” and I know there will be enough food left in the morning for the early risers. How would you like to spend a cold, windy, snowy night sleeping outdoors? Granted, there are some winter campers who enjoy that, but most humans prefer the cozy, heated boxes that we tend to occupy.

Small songbirds that visit our feeders are under a lot of stress to maintain their tenuous existence during the winter. They must find enough food to maintain their strength and then locate safe places to hide from predators in “cozy” nighttime roosts.
Last week I saw a medium-sized bird land in a tree near the feeders in the front yard. It sat patiently and bobbed its tail up and down a few times. It appeared to be almost as large as a blue jay, which are not very common this winter at my feeders. Once I looked at it through binoculars, I saw that it was a northern shrike.

The northern shrike is a winter visitor that nests in far northern Canada and Alaska and is about two inches smaller than a blue jay. We have seen them on our Christmas bird counts out in the country. They will often be found sitting on an electric wire, on the top of a small tree or along the edge of an open field looking for shrews, voles or field mice. Once Roy and I even saw one hover like a kestrel does while searching for similar prey in the fallow fields.
A few years ago we saw a shrike startle a junco, which caused it to hit the window and fall to the deck. The shrike was very quick to swoop in, pick up the stunned junco and haul it off for a meal. The shrike had difficulty carrying that bird due to its weak feet, but it made it a short distance to a hidden spot to have its meal.
The accipiters – mainly Cooper’s and sharp-shinned hawks – are the other common predators that make use of feeding stations for their “restaurants.” These swift-flying birds can enter a wooded area, then sit in a tree, just watching for any moving bird or small mammal. They strike with rapid flight and seize their prey with such surprise that most creatures cannot escape.
Last winter I saw a Cooper’s hawk take a mourning dove from the feeder area and try to fly away. It could not carry the bird very far, so it landed on the driveway in a fresh, one-inch layer of snow. These accipiters must pluck the plumage from their prey before eating, so I watched as the hawk began pulling out the dove’s body feathers while the dove was still alive and struggling under the grasp of the predator.

As with most birds of prey, the male is smaller than the female. A male Cooper’s hawk can be from 14 to 18 inches long. The typical mourning dove is 10 to 11 inches in length, so that is quite a hefty prey for a male Cooper’s hawk to handle. Female Cooper’s hawks can range from 17 to 20 inches in length.
Sharp-shinned hawks are closer to the size of mourning doves and blue jays, so they may seek smaller birds such as sparrows, juncos and finches for a meal. The population of small songbirds greatly outnumbers that of the accipiters. Studies have shown that most of the small songbirds taken by these predators have slowed down in their reaction time due to illness, injury or old age.
Many people say this predator-prey relationship is survival of the fittest. In the long run, the predators are unknowingly ensuring that the healthiest of the birds stay alive to breed. That, in turn, will create a far stronger race of their kind for future generations.

Years ago, bird names were given according to what they preyed upon. The northern goshawk got its name from feasting mainly on the ruffed grouse, so perhaps the name was a version of “grouse hawk.” The peregrine falcon used to be known as the duck hawk. The merlin – a bird that is not as common as other hawks – used to be called the pigeon hawk, and the well-known American kestrel was the sparrow hawk.
One bird that does not pluck the feathers of its prey is the merlin. I was away from home on a day when Roy saw one snatch either a hairy or a downy woodpecker in our front yard. Roy described the drama as he watched the hawk start to consume the woodpecker.
The predator, unlike an accipiter, did not pluck the feathers from its victim, but instead tore the bird apart and swallowed each piece, bit by bit. The merlin ate everything, feet and all, without discarding any of the victim’s parts. Then, after a period of several hours, it regurgitated the indigestible elements of its meal.
Thirty years ago, we saw a few northern goshawks, but their numbers have declined dramatically. A good friend of ours, Tom Erdman, would climb a tree to capture and band the young goshawks, but first he would have to trap the adult birds and enclose them in protective cans for the safety of all involved. He usually took along a type of net trap with a great horned owl inside – an owl that had been injured and could not fly anymore. The goshawks knew the owl was a predator and would fly in to defend their nest. That is how Tom captured the adults and kept them quiet until the banding was done.

We feed the birds with a good feeling that we are helping them. However, this also attracts the predators that hunt live birds for food. This is all part of the wildness of nature and also the natural way of weeding out the weakest and most vulnerable of the species. So don’t quit your bird feeding, and be sure to enjoy all the drama that it creates in your yard.