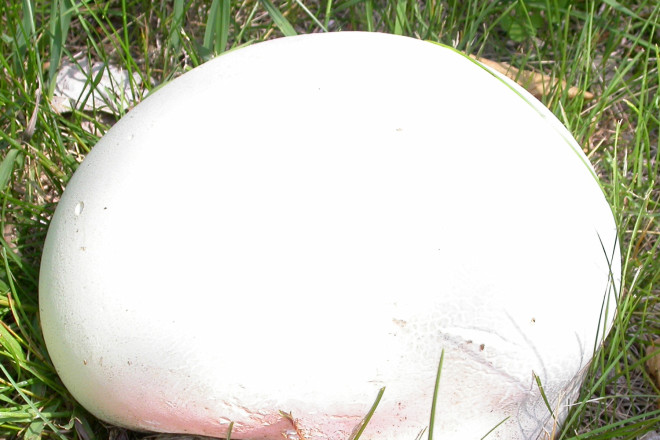 A fresh Giant Puffball is pure white inside and outside. Photo by Roy Lukes.

Every now and then I long for a quiet, sunny Saturday afternoon in early fall, about the time the Sugar Maple leaves are changing color, when I can return to one of my boyhood haunts in the woods. Reminiscing is so sweet when it can be done where happy-go-lucky experiences as a youngster were about as perfect as they’ll ever get.

I remember such a weekend, about 66 years ago, when I was home from college for the weekend. What a perfect afternoon it was for a hike through the woods along the Kewaunee River, through what my best friend, Tony, and I used to call the Bee Woods, and finally to a high hill overlooking the river valley resplendent with its fall colors. What a great place to think and to let the juices of the mind run freely.

Just about the time I had begun to munch on a sandwich a very strange far-away sound reached my ears, “Thump – thump – thump.” The sound reminded me of the 10-inch red rubber ball we so often played with at school, of bouncing that ball on the sidewalk.

The unusual sound would stop for a minute or so, then resume about every four or five seconds. That mysterious beat continued and slowly grew louder and louder, somewhat like the cadence of a miniature bass drum. By now I had laid my sandwich aside and was sitting at attention, expecting something strange to happen.

Suddenly two figures appeared over the rise of the next hill, a man and a little boy. Now I could see that the youngster was carrying something whitish, like a volleyball, under one of his arms and was giving it a good solid whack about once every four steps.

Finally they approached me, stopped for a chat and showed me with great pride the Giant Puffball they had found during their hike in the woods. This was the mysterious “drum” I had been hearing and the little boy was the drummer.

This brings to mind the trip several friends and I made to visit the famous outdoor writer of past years, Mel Ellis, and his wife Gwendolyn at Little Lakes west of Milwaukee. The pleasant trip involved delivering a Wisconsin Society for Ornithology award that he was not able to receive in person at an earlier date that year. After a wonderful talk with Mel and his wife it was suggested that we take a hike to see what a beautiful place for plants and wildlife they had created at Little Lakes.

Our being out in a light drizzle, and the season being perfect, we asked if we might see some mushrooms along the trails. Gwendolyn assured us that we would as we approached one of the large ponds wonderfully protected around its perimeter by many native plants.

Suddenly Mrs. Ellis motioned to an area where the remains of several large trees lay decaying. You can imagine our surprise at seeing a half dozen or more Giant Puffballs, one considerably larger than a volleyball. Another thrill was added to our visit when she invited each of us to take one with us, which we obligingly did!

I couldn’t resist giving mine several good “thumps” with the flat of my hand just to bring back wonderful memories. It resembled the softest kid glove I’d ever felt. Later a group of us at our home thoroughly enjoyed eating quarter-inch-thick slices lightly sautéed in butter and delicately sprinkled with a special Greek seasoning we like.

Very few fungi in the world are as easily identified as the Giant Puffball, Calvatia gigantean. However, I can imagine a careless person picking a nice small mushroom in the button stage, before the cap and stem develop, assuming that it is a very young puffball, and eating by mistake one of the deadly Amanita mushrooms.

Fortunately there are several very easy precautions you can take in order to avoid a drastic mistake, in fact perhaps your last mistake! Use only the large puffballs for food, those that are grapefruit size or bigger. Slice through the globe-shaped fungus from top to bottom. In the first place, the color of the flesh must be perfectly and evenly white in order to be edible.

Secondly, this cross section will enable you to check for tiny pin-holes which indicate the presence of small worms. We do not advocate eating such a puffball. Thirdly, by slicing through the puffball, especially if it a small one, you will clearly see the undeveloped stem and cap if it is one of the deadly white Amanitas. 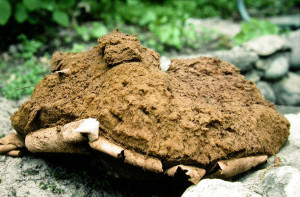 When a Giant Puffball is over-ripe the skin peels back to release the thousands of microscopic spores. Photo by Roy Lukes.

As a puffball ages, its flesh slowly turns to yellow until the spores eventually become tobacco brown in color. From its first appearance it may require a puffball as much as two weeks to fully mature. A large specimen about 16 x 12 x 10 inches was estimated to contain approximately seven trillion spores. Experts did some mathematical figuring and came up with the calculation that if each of those spores produced a Giant Puffball the same size as the parent, the total resulting volume would be about 800 times the size of the Earth! It is said that there is a good chance of one out of a billion spores ever reaching maturity. Thank heaven for that!

Puffballs have for centuries been known to stimulate gourmets’ salivary glands and excite wonder in the lucky finder, like coming upon a gigantic egg laid by a mysterious oversized bird.

Henry David Thoreau said, “If a man does not keep pace with his companions, perhaps it is because he hears a different drummer. Let him step to the music which he hears, however measured or far away.”

This brings me full circle back to that gorgeous September day and the mysterious and enchanting music a little boy, in tune with nature, drummed for me on a Giant Puffball!

On Sept. 26 at 9 am, go on a Mushroom Hike with Charlotte Lukes at Newport State Park. Join Door County’s mushroom expert as she explores the world of fungi. Charlotte has been studying mushrooms for more than 40 years and will share her knowledge on this morning hike. Meet at Lot 3.