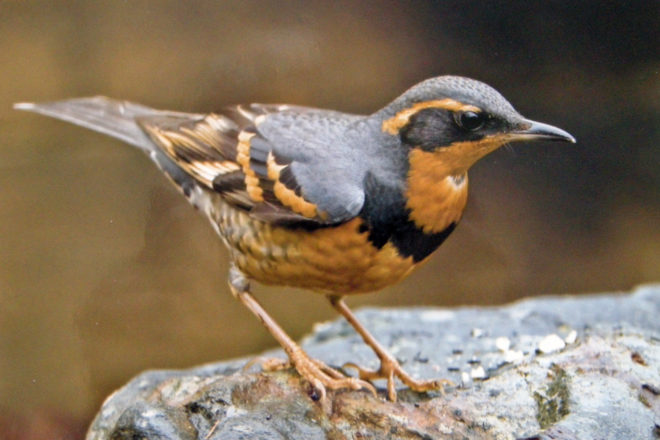 A female varied thrush has colors that are similar to those of the American robin, but she has orange on her face and wings. Submitted.

I subscribe to several local and statewide bird-observation networks through which members report unusual bird sightings by email. During two days in the middle of December, a very rare bird was reported visiting feeders and a heated bird bath on the south side of Sturgeon Bay. It was a Bullock’s oriole!

This species breeds in the mountains of the West but can also be found in the western half of Texas, Oklahoma and far-western Kansas. Some field guides show that its range extends into the western parts of the Plains states, but there it may hybridize with the Baltimore oriole.

Well, this bird showed up at the same home again on Jan. 3 but stayed only a short time. It may be finding food at other feeders in the neighborhood, but no one else has reported seeing it again.

Why do these rare birds travel so far away from their native areas? Can they survive our cold winter environment, or will they perish here? Will they find their way back home? We may never know all the answers.

Scientists who study global climate change say that the jet stream traveling from west to east has been changing during the past decade. Perhaps this bird got caught in the winds blowing from its native territory and was delivered into Door County.

There have been many more records of another Western bird finding feeders and yards in Wisconsin during the autumn migration. That species is the varied thrush – a bird that’s about the same size as, and closely related to, the American robin. It breeds in the Pacific Northwest all the way to Alaska, preferring moist conifer woodlands. In fact, a friend called me recently to say that a varied thrush was seen in Ephraim.

The Wisconsin Society for Ornithology printed a checklist of all species that have ever been seen in the state. Four categories of commonality are listed: regular (seen more than eight times per year); rare (seen every year but fewer than eight times); casual (reported once every one to five years); and accidental (found fewer than once every five years). The varied thrush is considered rare, and the Bullock’s oriole is in the accidental category.

I remember a woman in Jacksonport calling my late husband, Roy, to say that she still had a hummingbird visiting her feeder in November 1980. She and a neighbor had kept the feeders up so the bird could get nourishment, but when it was still there in mid-December, following two major snowstorms, it became a challenge to keep the hummer feeders from freezing. That tiny bird was last seen Dec. 19, a day before the 1980 Christmas bird count.

Nearly every winter, a very small number of several species of birds in the state have for one reason or another not migrated south as they normally do. It’s difficult to say what causes this phenomenon. Some ornithologists think that eye cataracts may influence these birds to stay because they find it hard to see well. Autopsies performed on some wintering cowbirds near Minneapolis one year revealed that they were afflicted with encephalitis – inflammation of the brain, which is also called brain fever. These conditions may be related to old age or perhaps an injury.

Many of you may enjoy searching for warblers during their spring migration. Most are colorful, small, fast-moving birds of the treetops and are difficult to identify because they do not stay in one place for very long. They’re insect eaters and must head south in the fall to find food and warmer weather conditions.

There’s one warbler, however, that has been reported on some of our Christmas bird counts: the yellow-rumped, or Myrtle warbler. It is perhaps the hardiest of all the warblers and often the first one to return in the spring.

Winter is normally a quiet time for nature activities. That’s when bird-watching is one of the best things to maintain a connection with wildlife. The annual Christmas bird counts were done the third weekend in December, and with no snow on the ground, fewer birds were seen at feeders.

That’s just one type of citizen science: observing and recording bird activity during the winter, which can help ornithologists understand what’s happening to our avian population. Also take the time to help our native birds by keeping seeds, suet and cracked corn out for them, as well as a heated bird bath with clean water every day.