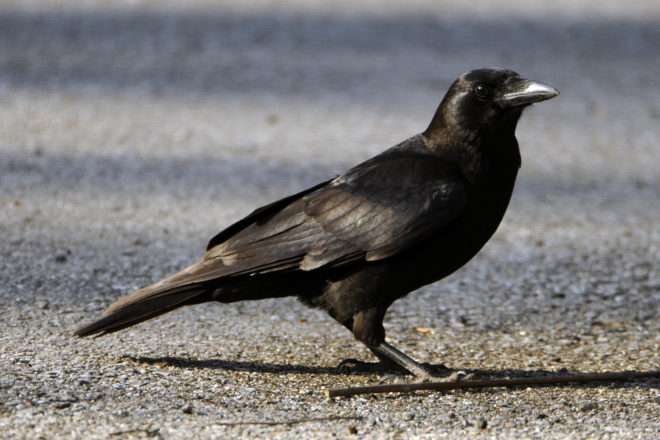 This crow was searching for cracked corn that we scattered on our driveway. Photo by Roy Lukes.

A report came in on Feb. 17 from a birder in Brown County that the first horned larks and an eastern meadowlark were seen along a rural road east of Bellevue. He also said that the horned larks were seen mostly near the shoulders of the country roads.

I keep daily weather records of temperature, barometric pressure and precipitation. So far this year, since January 1, I have had 56 inches of snow and more than an inch and a quarter of rain. This heavy snow cover has delayed the horned larks from returning to their breeding grounds. In a milder, less snowy winter, we used to see these small, sparrow-like birds along the roads in January, gleaning weed seeds from the plowed shoulders. When a car approached, they would fly low into the surrounding field, showing their distinctive, dark tail feathers.

Occasionally an eastern meadowlark might stay in our area throughout the winter. There have been several Christmas bird counts – either for the Sturgeon Bay circle or in Southern Door – when a meadowlark was seen in mid- to late December. If the fields stay relatively bare of snow, they can find enough weed seeds to sustain them until spring arrives.

I remember the final winter that we spent living in the Ridges Upper Range Light and how cold and snowy the month of January 1982 was. One morning in the middle of the month, the dawn outside air temperature was -30 degrees. The total snowfall recorded at The Ridges Sanctuary, just in January of ’82, was 60 inches.

A number of friends helped us clear the road into Toft Point. Many of the conifer trees at the edges of the main road were more heavily branched where they received sunlight along the open path. These parts of the trees became greatly loaded with snow, which made them fall over into the road.

Most of us remember the un-spring-like April of last year. I recorded 39 inches of snow in just a two-week period, plus 1.4 inches of rain later in the month. The first hepaticas didn’t start blossoming until April 27. In some springs, we would find them in bloom by April 1.

Lately there have been more crows gathering along roads and even in my front yard, perhaps in search of something to eat. All the agricultural fields have a solid covering of snow, and that limits places for these birds to find food.

It is this time of year when the common ravens start courtship and nesting. In fact, the last breeding-bird atlas studies done in the period from 1995 through 1999 found raven nests with eggs as early as February 16. Ravens breed primarily in the northern half of the state.

The American crow is a widespread nester in all of Wisconsin. It prefers to build in mature hardwoods, and breeding studies have found that eggs were laid beginning in late March, with nest-building starting as early as mid-February.

Roy remembered how he watched the crows flying past the open school windows when he was a child in Kewaunee and telling his dad that he wished to be out there, free to enjoy the fresh, spring air. He said it was not difficult to imagine his dad saying, “Do you suppose the crows are smarter than you?”

It was the Rev. Henry Ward Beecher who issued an interesting and frequently quoted statement many years ago: “If men had wings and bore black feathers, few of them would be clever enough to be crows.”

The brain of a crow is larger in proportion to its body size than any other species of bird. If life on our planet ceased to exist, because of its intelligence, ability to find food and water, and the like, the last relatively large creature to survive would be the crow.

Crows have adapted well to humans, and large numbers live in cities. Friends who reside on the outskirts of a large metropolitan area tell of huge crow roosts that were causing the citizens untold misery. Surely this survival story – a success from the crows’ point of view – can be attributed directly to the intelligence and adaptability of these omnivorous, highly social and communicative birds.

Don’t go into the deep woods in search of crow nests because they prefer a combination of small woodlots and broad, cultivated fields. Golf courses are fine, too! The layout of most cities and suburbs – complete with open glades and groves of evergreens – is ideal for their nesting and food-finding efforts. Along with red-winged blackbirds, European starlings and common grackles, crows are extremely capable of living with people and surviving well in spite of them.

The mechanical harvesting methods that are widely used in today’s agriculture were made to order for the survival and easy food hunting of crows, blackbirds, starlings, grackles and cowbirds. Sandhill cranes can now be included because they are often seen in cut cornfields in autumn.

One estimate is that a single crow family kills and consumes 40,000 or more harmful insects, including grasshoppers, beetles, moths, caterpillars, wireworms, grubs and army worms during the nesting season. This food is high in protein, which the young require as they grow in the nest for about five weeks. During that time, they can eat half of their own body weight in food daily!

Our good friend Carl Scholz had a pet crow years ago when his family operated The Farm northeast of Sturgeon Bay. He told Roy that a crow was perhaps the finest pet in the world. In fact, he said that his family often had crow for breakfast – that is, as a “guest,” not to eat! The pet crow would sit on the back of a chair (where it usually wasn’t appreciated, especially by the four children) and beg for food.

Its favorite food was scrambled eggs, rich in protein. Carl, having had a lot of experience caring for and feeding baby chicks, realized that young birds require a high-protein diet and that as soon as they don’t receive enough of this important substance, their wings begin to droop, and the birds become listless.

Be glad you have a warm, secure home in which to live and do not have to suffer these harsh winter conditions that the crows must endure. Think spring!