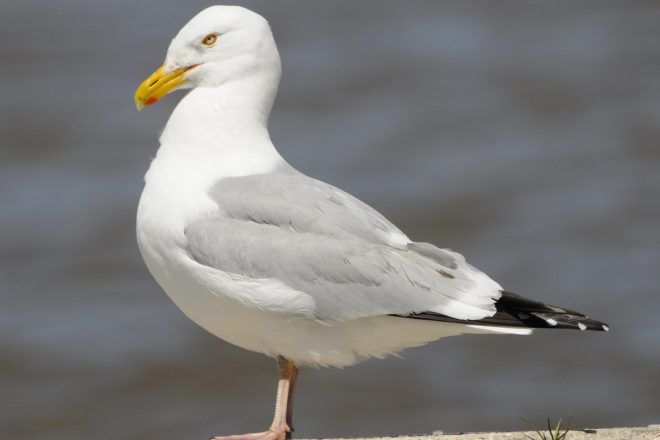 The mantle – or wing surface – of an adult herring gull is gray, and the yellow lower bill has a red spot near the front. Photo by Roy Lukes.

All summer, we see two regular species of gulls: the herring gull and the slightly smaller ring-billed gull. Occasionally a few Bonaparte’s gulls are seen, too, because as a mainly migrant species, a few immature birds may hang around Lake Michigan’s shoreline. Greater and lesser black-backed gulls also make an occasional appearance.

This column will cover the eight species that are more commonly seen in Wisconsin. Most people refer to them as seagulls, but few species are actually found way out over the oceans. The great majority prefer to remain along the shorelines or on inland lakes, and breeding colonies are found on the islands surrounding Door County. The first Lake Michigan record of a nesting great black-backed gull was documented in 1995 on Spider Island, east of Newport State Park, during Wisconsin’s initial breeding-bird survey.

Great black-backed gulls have bred along the Atlantic Coast and into the eastern Great Lakes for many years, but they are now expanding farther west and south along the Atlantic. They are also nesting farther north into the Canadian Maritime Provinces and may become a threat to puffin populations. This species is the world’s largest gull, with a wingspan of five to five and a half feet.

The lesser black-backed gull breeds in Eurasia and can be found migrating in the far northeastern part of North America. It most often winters along the Atlantic and Gulf coasts, but it’s also known to travel into the eastern half of the country.

Iceland gulls and glaucous gulls are breeders in the extreme northern part of our continent in the Arctic Circle and are seen in Wisconsin only during the winter months. The glaucous gull is the world’s second largest, and both are entirely white during their second year.

The two smallest are the Franklin’s gull and the Bonaparte’s gull. They are 13-14 inches long, compared to the great black-backed, which is 30 inches long. Both male and female adults have black heads during the nesting season.

The Franklin’s gull breeds in the prairie provinces of Canada and similar territories in Idaho, Montana and the Dakotas, nesting on the ground or on floating mats of cattails and bulrushes. It migrates south throughout most of North America and spends the winter along the Pacific coast of the U.S., Central America and South America.

Bonaparte’s gulls nest in conifer trees across most of Canada from south of Hudson Bay and westward to Alaska. We see these more often during migration than most of the other nonbreeding gull species.

One of the last two species that are most common is the year-round herring gull. It nests on rocky shores and cliffs or on grassy hummocks on the islands around Door County. It is this species that is significant in how my late husband, Roy, became the first manager and chief naturalist at The Ridges Sanctuary in Baileys Harbor.

Harold Wilson and Merle Deusing were president and vice president, respectively, of The Ridges’ board of directors, and they were going to band nestling herring gulls on the Adventure Islands during the summer of 1963. They invited Roy to help. All three were federally licensed bird banders, but even with their experience, it was a tricky job to catch the young gulls as they hid under shrubs and stinging nettles while being dive-bombed by adults. On the way back to Ephraim, Wilson and Deusing asked Roy to take the job. He began during the summer of 1964.

Herring gulls are considered four-year gulls because that’s how long it takes for them to mature to the gray-and-white plumage of adulthood. First-year gulls are mostly brown and white, with a black bill that’s pale at the base. The ring-billed gull is a three-year gull, reaching adult plumage by its third summer. Both species have pale-gray wings with black tips.

You may often see ring-billed gulls and herring gulls in farm fields during the spring as they follow plows that reveal grubs and earthworms as they turn up the soil. If you get a close look at the beaks and compare body sizes, it’s easy to tell them apart. The herring is 25 inches long, and the ring-billed is 19.

Adult herring gulls have a red spot near the front of the lower mandible. Ring-billed gulls are just as their name says: They have a black, vertical ring around the front part of the yellow beak. If you stop at a fast-food restaurant and see gulls flying around the parking lot looking for dropped food, most likely they’re ring-billed gulls – they’re great scavengers!