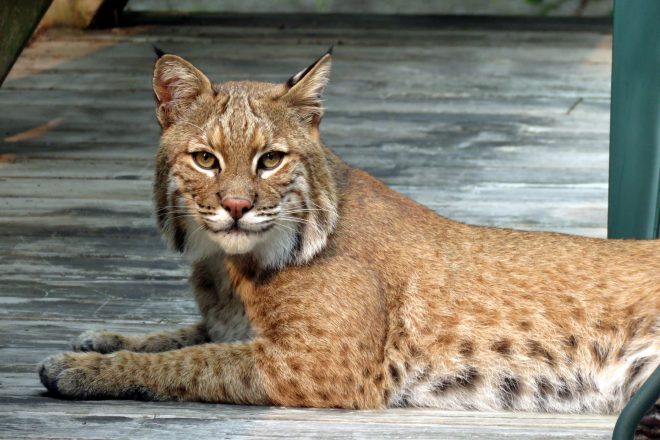 A close-up helps to show the small black tufts of fur at the top of this bobcat’s ears. Submitted.

Two friends were enjoying a morning at home when something very unusual happened. They noticed an animal walk onto their deck, and they realized it was a cat – but no ordinary house cat. They took a few photos through two panes of glass. Then when my friend opened the inner glass door, the cat looked at him but remained lying on the deck. A few more photos were snapped, and the animal left after a 15-minute rest.

By comparing the width of the deck boards and the distance between the table and chair legs, my friend concluded that the cat was 28 inches long, plus a five-inch tail. He checked some field guides and determined it was a bobcat.

Other bobcat sightings have been reported in Door County, but not very often. In fact, some resources don’t even report bobcats being in northeastern Wisconsin. They are more prevalent in the state’s Northwoods, but Midwest populations have been declining.

The bobcat, a member of the Felidae (cat) family, is also known as the red lynx, bay lynx and wildcat. It is closely related to the Canada lynx, cougar, panther, puma and mountain lion, and it’s an expert tree climber.

Its range extends across extreme southern Canada to Mexico. Two subspecies exist. Ours in the east has darker brown coloring; the western one of deserts and mountains is paler brown, with gray in its fur.

A bobcat is a loner that, in this part of America, usually conceals itself in woodlands, swamps, marshes and remote, brushy wild areas. With greater human presence, however, they may become more adept at finding food nearer to homes and farmlands. Their diet consists of mice, squirrels, rabbits, hares, muskrats and some birds. They are beneficial in orchard areas because they help to consume rodents that can chew tree bark. Coyotes are their biggest enemy.

A bobcat’s body size ranges from 25 to 30 inches, with a five-to-six-inch tail, and it weighs 20-40 pounds. Females are smaller.

Bobcats are solitary and territorial except for a brief mating period in late winter. They mark their territory with urine, feces and claw marks. Bobcats can breed at one year of age and have one to four kittens, which are born in early spring and raised in a den, hollow tree, cave or deep thicket. Males do not participate in raising the young.

They can live near human settlements and may raid domestic poultry farms. The bobcat’s hunting style is like that of a house cat, slinking low in the grass or vegetative cover to pounce on prey with sudden bursts of speed. But they are seldom seen because of their nocturnal hunting habits, extreme cunning and protective coloration. A footprint measures about two inches square.

Another secretive, nocturnal mammal is the fisher. They were rarely found in Door County but now have an increased population. This animal is the only successful predator of a porcupine. A fisher quickly grabs its prey by the nose and flips it onto its back. The belly of a porcupine is the only area with no spines, so that’s where the fisher can kill and eat the animal.

The fisher is related to the marten, skunk, weasel, mink, ferret, wolverine, badger and otter – all members of the Mustelidae family. Mustelids – the largest family of carnivores – number up to 60 species. They are typically small animals with long bodies, short legs and thick fur. Most are solitary, nocturnal and active year-round.

A friend who likes to hike saw an immature mink come out of the woods, stop on the trail, look at him and walk up to smell his shoes. Then it quickly scampered off into the brush because the adult was nearby. Young animals can be quite curious while they learn about their surroundings.

A mink’s normal range encompasses much of North America, except the Southwest and Mexico. They are excellent swimmers and prefer wooded streams and marshlands, but they can also travel a long distance from water. Their body length is 20 inches, plus an eight-inch tail.

A mink’s food includes muskrats, frogs, snakes, fish and small aquatic animals, but they go overland during the winter in pursuit of rabbits.

Mating takes place in February or March, and three to eight young are born about two months later. Unlike the male bobcat, the male mink helps to raise the young.

Mink are closely related to skunks and are sometimes nervous and quick tempered. Like skunks, they have a scent gland under the tail, but they are far less conservative about using it. Fortunately, we seldom come in contact to upset these creatures and experience their wrath.

Perhaps it is this odiferous feature that made furriers give up their business and allow these wild creatures to keep their coats!