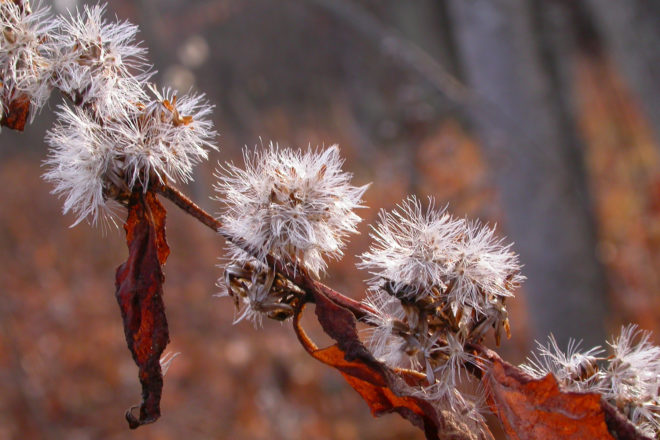 The dried stem of a woodland goldenrod has many seeds with white hairs. Photo by Roy Lukes.

This is the time of year that the common milkweed seeds break out of their pods and sail through the cool air on silky parachutes. The swamp milkweeds in my front yard butterfly garden have been doing the same thing.

Perhaps few people have heard of the silk tree and silkweed. Silk tree is another name for the kapok tree. Its seeds are contained in six-inch-long oval-shaped pods. The inner fibrous hairs attached to the seeds are composed of hollow strands which are very impervious to water. Their outstanding qualities, buoyancy and resiliency made this material perfectly suited for manufacturing life preservers. Most of this valuable substance was imported from Indonesia and when the supply line to that country was cut off during World War II a substitute had to be found.

Roy remembered, as a child, blowing the feathery seeds of the milkweeds into the air during autumn walks home from school in Kewaunee. Once he was in junior high, in the fall of 1942, the youngsters began collecting burlap sacks of the milkweed seeds to help in the war effort. 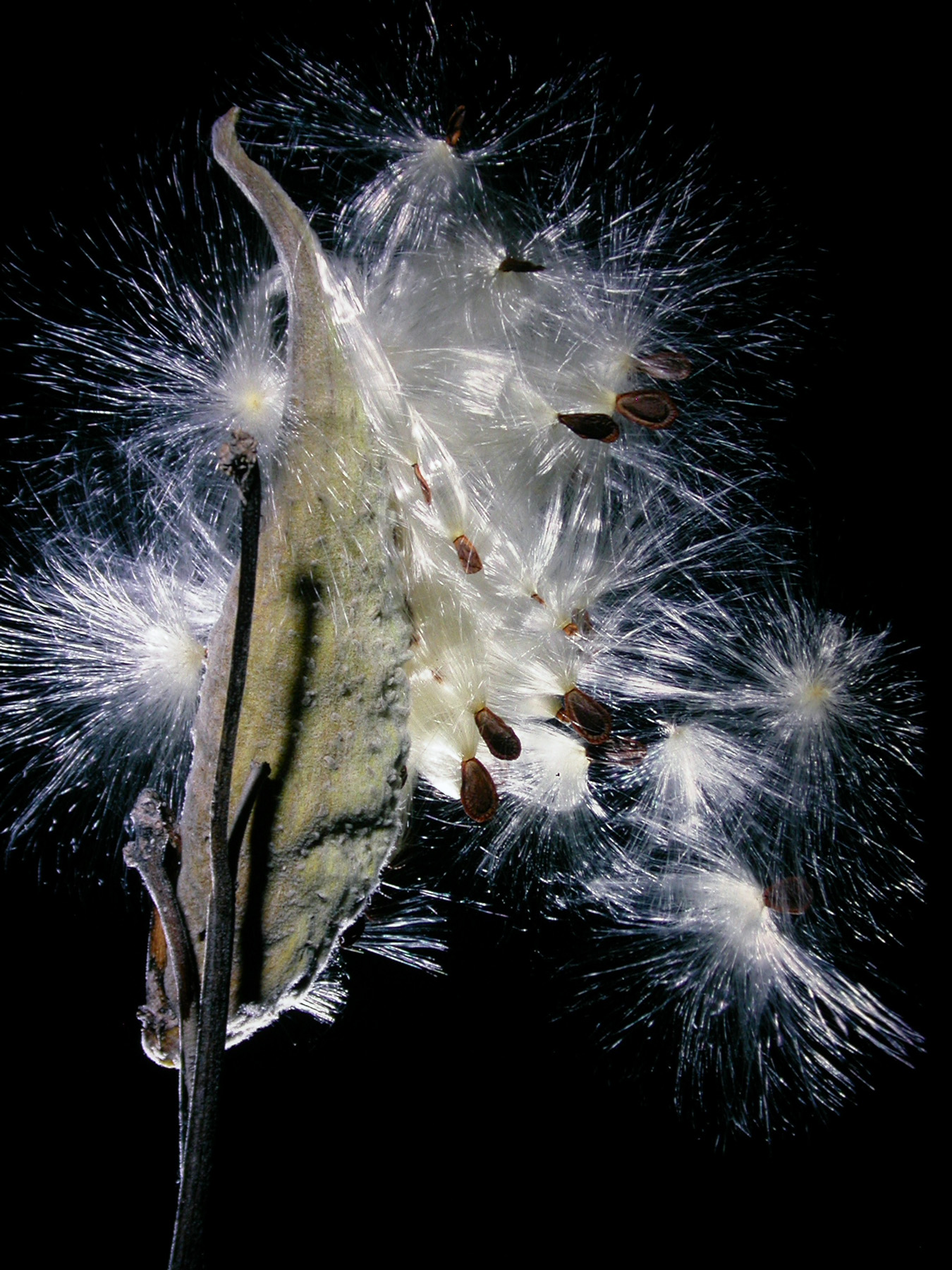 The silky hairs attached to the seeds of common milkweed make it look like they are exploding from the pod. Photo by Roy Lukes.

Experts in their search for a suitable material discovered that the long silky fibers attached to the milkweed seeds were hollow and also coated with wax. Here was the perfect life preserver material growing abundantly along roadsides, in abandoned fields and waste places and in fact right in the backyards of many Americans. It was also found through tests that 3½ pounds of the silky hairs would keep a man afloat for three days.

When Roy and I first developed our big vegetable garden on the west edge of our mostly wooded land there were several common milkweed plants that we nurtured and hoped monarch butterflies would lay their eggs on the leaves. Eventually we learned of other species of native milkweeds that had leaves which were more tender and easier for the larvae to consume. That’s when we purchased a swamp or red milkweed perennial plant and it has attracted many butterflies and other insects through the years.

Recently I have been noticing many small birds feeding along the quiet country roadsides as I drive by. The major cold front that came blowing through on Sept. 21 brought a wealth of migrating birds from the north. They appear to be attracted to the weedy plants that contain many seeds at the edge of the pavement. Ragweed is a favorite along these narrow bands of gravelly soil. Most weeds thrive in disturbed ground, where they often grow in full sun.

A native plant of open fields, and some wooded areas, is the goldenrod. Soon the dried plants will be covered with silvery tops as the seeds are formed. The zig-zag or woodland goldenrod is the one that grows well in shaded habitats. It has much wider leaves to attract the more limited sunlight in the upland hardwoods. The seeds of this species can be quite beautiful on a sunny fall day as the oaks, ashes and maples lose their leaves allowing greater amounts of light to flood in.

Seed pods of many plants can be used in making decorative centerpieces for a dining table. I remember Roy’s dad, who loved to grow flowers, making beautiful arrangements of three of his favorite plants. Two orange ones were bittersweet and Chinese lanterns. The third was called silver dollars, Lunaria annua, also known as the money plant and honesty. The parchment discs remaining, where the outer coverings had been slipped away from each side, brought about the name silver dollars.

Countless seeds, products of this past growing season, are being scattered and planted by birds. I am always quite amazed to see the straight rows of sugar maple, ash, pin and black cherry trees planted in old abandoned orchards. Apparently the seeds were sown, via droppings, by birds that perched in the old trees.

Stone fences often become interesting natural gardens of blackberries, gooseberries, wild raspberries, choke cherries, buffalo berries, sumac and a host of other native shrubs and trees. Many were introduced to the fence lines by unsuspecting gardeners, the birds, raccoons, foxes and other animals that were attracted to these narrow but important wildlife corridors and food reserves. 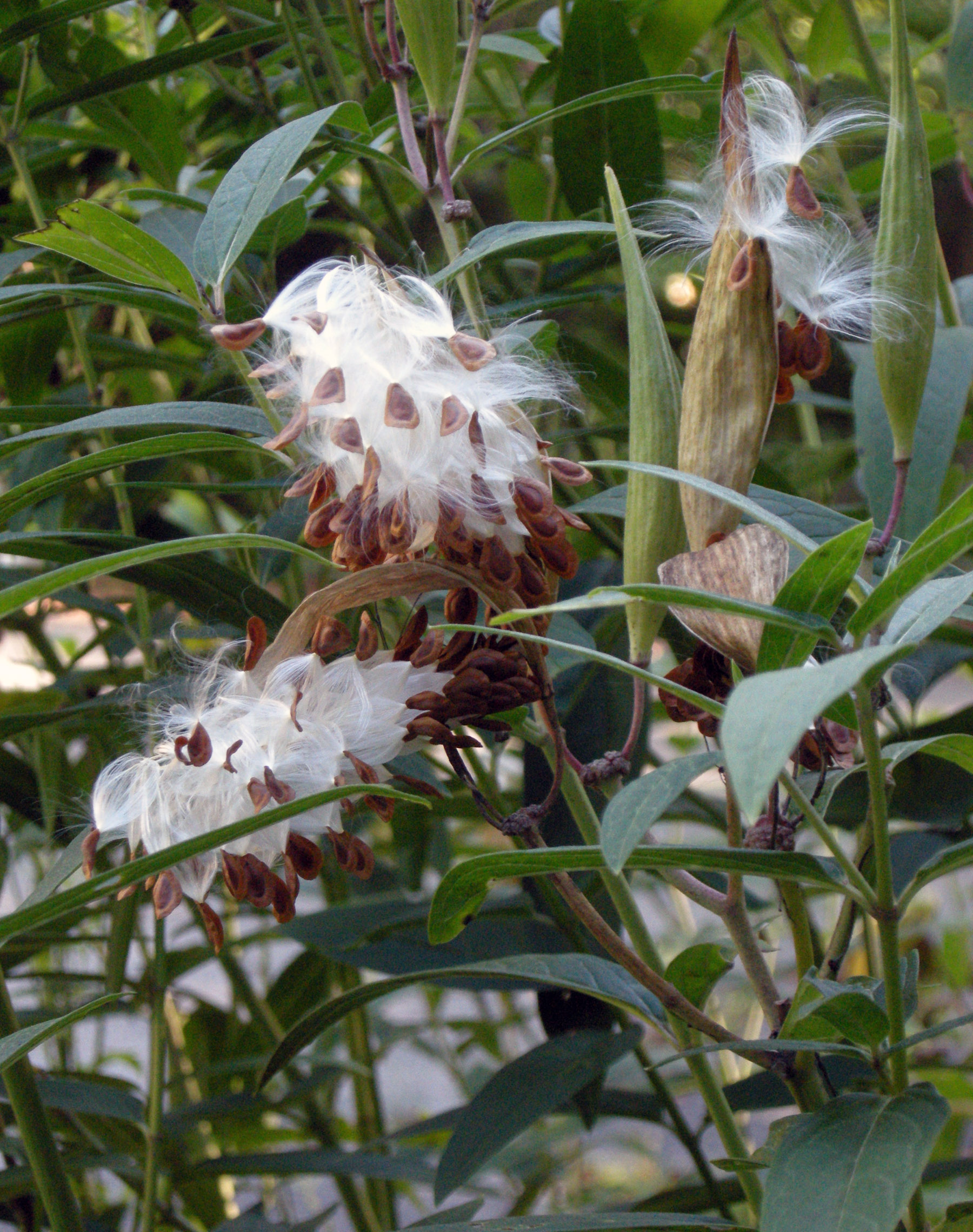 A swamp milkweed plant’s seed pods are splitting to release their abundant parachutes to the wind. Photo by Charlotte Lukes.

One way of collecting seeds during a walk through the woods or weedy fields is to wear woolen socks and slacks. It is amazing to see how many seeds have rough surfaces or tiny spines that will adhere to the woolen fabric. I remember walking through a wooded area where sweet cicely grew with its twin-barbed seeds, long and tapered like little black needles. Soon it felt like something was poking your skin as they drove their way through your clothing around your ankles.

Sweet cicely, common burdock and beggar’s ticks are just a few of the many “stick tights” that inadvertently accompany you or your dog home from a jaunt in the field. Their planting success is in direct proportion to their uncanny ability to hitch a ride.

Fall and early winter are excellent times to pay more attention to those amazing and important seeds. Roadsides, backyard fences, out-of-the-way places and even some people’s gardens are liberally adorned with these marvels of nature.

If you are interested in making centerpieces using seeds and seed pods try to find a helpful book written a number of years ago by a friend from southern Wisconsin. It is called Pods: Wildflowers and Weeds in Their Final Beauty by Jane Embertson and will help you identify some of your wild seeds and learn ways of using seed pods in making fall decorations. A deeper knowledge of these seeds this fall will intensify your enjoyment of the flowering plants that will produce them again next summer.