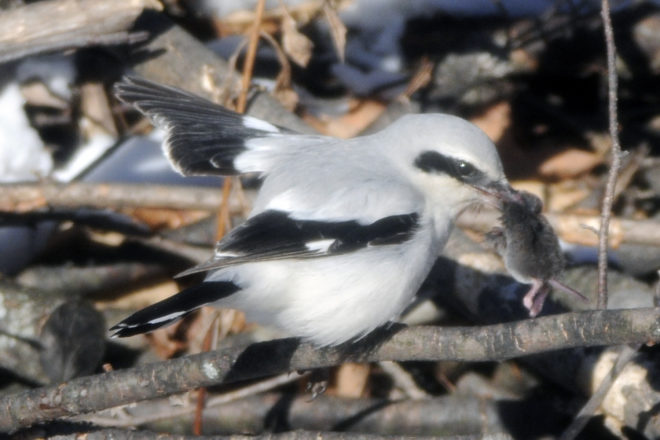 This northern shrike caught a short-tailed shrew and held it as it looked for a place to store or consume it. Photo by Roy Lukes.

How would you like to live outside, alone, in all types of weather, and be responsible for finding all of your food without any help? That’s what wild birds must deal with as we enjoy the comforts of our heated homes.

Some bird species such as pine siskins and American goldfinches are communal. They dine together at feeders and fly off in a flock when danger is near. But others – the two species of shrikes are in this category – are lone hunters and do not usually go to feeders for seeds.

The species that’s here during the winter months is the robin-sized northern shrike. You might see this bird in your yard, but not to eat seeds. It’s there to catch the small birds or rodents that visit your feeder area, and it’s capable of catching a bird as large as a cardinal.

Reports of the first sightings of northern shrikes in Door County range from Oct. 4 in 2009 to as late as Nov. 27 in 2015, and during some winters, they’re not spotted at all. This year, Melody Walsh reported the first one Nov. 6 near her home on Washington Island. The latest date when they have been observed here in the spring was April 21 in 2014.

The loggerhead shrike is more common in the South. Its scientific name, Lanius ludovicianus, is derived from the Latin “lanius,” meaning “butcher,” and its species name refers to Louisiana. The northern shrike’s species name, “excubitor,” means “watchman.” That’s because it sits patiently, waiting for its prey to appear.

Loggerhead shrikes have nested in northeast Wisconsin and were documented in 12 counties during the first Atlas of the Breeding Birds of Wisconsin surveys conducted 20 years ago. A good friend, Kevin Swagel, found a nest of this species in the countryside east of Sturgeon Bay. They are birds of the open country.

Both species have black, white and gray plumage. A heavy head supports the strong muscles used in killing prey. White wing patches show as they fly, and the outer ends of the tail feathers are also white. The black mask is a bit broader on the loggerhead and extends across the top of the beak.

It’s interesting how this species obtained its common name. The word “shrike” came from the German word “shriek,” relating to the sound of its alarm call, but this bird also has a sweet song and can mimic other birds.

The term “butcherbird” comes from the way it stores its victims on barbed-wire fences or on the thorns of bushes and trees. This may be a way to secure the insect or small rodent so that the bird can tear the creature apart to consume it because shrikes have weak feet and cannot grasp their prey the way hawks do. It’s also a way to store food when conditions are poor for finding insects, mice or voles. Some studies have shown that storing prey in this way and leaving it to hang neutralize poisons or toxins in certain insects and frogs.

This is the only passerine (song bird) that’s a bird of prey. It sits patiently on a power line or fence and watches for any movement of insects, field mice or small birds. Then it swoops down and snatches the creature with a precise bite at the back of the neck, which severs the spinal cord. The shrike may then shake the victim to break its neck. The beak has a tooth-and-notch form that’s very effective in killing prey. The shrike’s feet are too weak to carry its prey, so it transports what it’s killed with its beak.

Populations of loggerhead shrikes have declined by nearly 80 percent during the last 65 years. The heavy use of pesticides in agriculture has killed so many insects that the birds need to feed to their young in the nest.

The normal breeding range of the loggerhead is throughout most of the southern half of the United States, into the grasslands of the prairie states and into south-central Canada. They also nest sparsely in a few Great Lakes states.

The loggerhead is about nine inches long, and the northern is 10 inches. Both have long tails and chunky heads that appear a bit large for their body size. The northern shrike has a rounded forehead; that of the loggerhead is slightly flattened.

The breeding range for the northern shrike extends from far eastern areas of northern Canada, around the southern edge of Hudson Bay and across northern parts of that country well into Alaska. The northern species seems to be holding its population number steady or slightly increasing it, according to annual breeding-bird census data – good news for this interesting species.

The Christmas bird count for the Sturgeon Bay circle will be held all day on Saturday, Dec. 19; and the Brussels (Southern Door) count will be conducted Sunday, Dec. 20. Changes will be made to keep all observers safe during the pandemic, so more good birders are needed to count birds at their feeders and in their yards.

If you can help, even for just half a day, contact Charlotte Lukes at [email protected] or 920.823.2478 to learn whether you live in one of the count areas. Report forms will be sent to all observers who plan to participate.