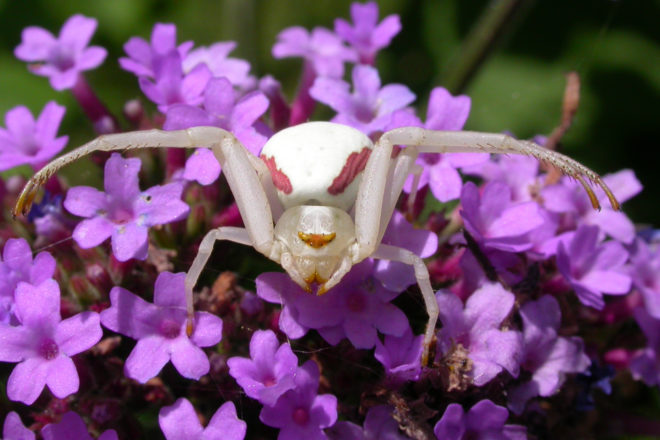 Crab spiders, also called ambush spiders, can change body colors to match the flower they’re sitting on as they wait for an insect to land in front of them. Photo by Roy Lukes.

Discovering an unusual spider on a perennial plant in my front yard led me to send a photo of it to Mike Draney, a UW-Green Bay professor of entomology and a spider expert. He replied that it was a nursery web spider, and seeing its swollen body, he said it was loaded with eggs. He also said that there have been several other sightings of this spider in northeast Wisconsin so far this summer.

Most people shy away from spiders. In fact, many people even fear spiders – and snakes – but in general, these creatures want to get away from you faster than you wish to get away from them. And it’s comforting to know that Door County has no native snakes or spiders that are venomous.

Spiders are in the large class called Arachnida, which includes scorpions, pseudoscorpions, mites and ticks. We have some of each type in this part of the state except for the true scorpions, which are common in the southwestern part of the country.

Spiders have four pairs of segmented legs, no antennae or wings, and only two body regions: a cephalothorax (sef-a-lo-THOR-ax) and abdomen. The two body parts are connected by a narrow, short, practically invisible segment. Insects, in contrast, have six legs and three body parts: a head, thorax and abdomen.

Spiders also have eight eyes (rarely six), variously arranged. Some have sharp vision, but others are nearly blind. Most spiders are not strong enough to bite through human skin.

There are estimates of a million-plus spiders per acre, ranging in size from so small that they are rarely seen, to larger types such as the wolf spider. They live in gardens, fields, wetlands, forests and even our homes.

It is sad that some people want to kill every insect and spider they see near them. Spiders do a great service by catching and devouring many insects that we don’t want around our homes. We would have great difficulty in discovering better controllers of the insect population than spiders.

One study found that about 14,000 spiders lived on herbs, shrubs and trees per acre of various woodlands in Illinois. And it has been said that the spiders in England and Wales eat about 22 trillion harmful insects annually. Perhaps we couldn’t survive without spiders!

Some of the more common spiders seen in our area include the crab spider, long-jawed orb-weaver, yellow garden Argiope (ar-JY-o-pee), jumping spider and wolf spider.

It is fascinating to observe how they hunt for their food. Some weave webs, and those often have poor eyesight. They depend instead on their sense of touch as they feel the web shake when their meal gets caught in it. Others such as the wolf spider wait in hiding to snatch their prey. You may have heard of the trapdoor spider, which are mostly tropical and about 1.2 inches long, and dig tube-like burrows in which they hide.

Wolf spiders are more common up north and can be active both day and night. Their bodies are often quite hairy, and they do not spin webs. The female carries the large egg sack around with her until the hatchlings emerge. Then the babies ride on her back as they grow. The adults have good vision and can range up to 1.5 inches long, including their spiny legs. They tend to be solitary, but their name originated in Europe, where it was thought that they hunted in packs.

Orb-weavers form a family of 2,500 species and live in all parts of the world. There are several hundred species in our country, and all have poor eyesight. They feel the vibration and changes in web tension as a victim is caught, and then it is amazing to see how fast the spider moves to ensnare its prey in a tight web and kill it with an injection of venom.

It is fun to walk down a country lane in later summer, especially in the early morning, to see dew-covered spider webs artfully stretched between shrubs along the roadside. They are things of great and delicate beauty. Most people don’t know that a spider usually eats its web and spins a new one every day.

While observing an adult help a child to watch a spider spinning a web, the famous naturalist Donald Cullross Peattie said, “If he [a child] learns admiration instead of disgust for the tiny spinner, he will have learned one of the greatest lessons in nature – that all life is sacred.”