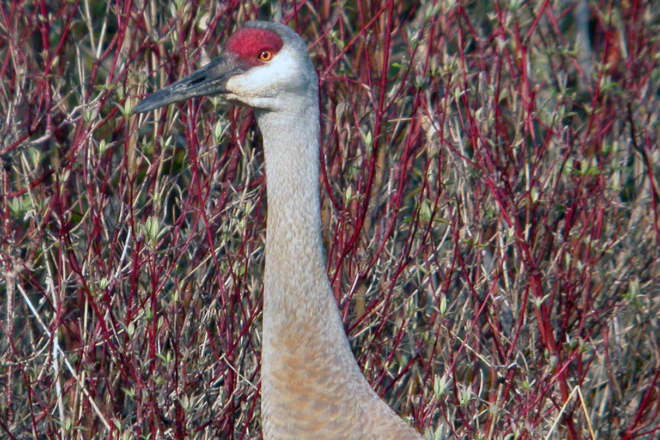 A sandhill crane surveys her territory for nesting near the Weborg Marsh in Peninsula State Park. Photo by Roy Lukes.

March is the month when many birds return to Door County. The greater hours of daylight and higher level of the sun cheer us all and change  birds’ activity to beginning to set up a breeding territory and seeking a mate.

The blackbird group is one that makes an early appearance – some species often by the middle of March – and it includes the red-winged blackbird, eastern meadowlark, brown-headed cowbird and common grackle.

Winter woods and fields are pretty quiet, so it’s a thrill to suddenly hear the call of newly arrived red-winged blackbirds. They sit high on power lines or tall shrubs, sing and proclaim their territory, and flare out their wings, showing the blazing-red wing patches.

Common grackles and cowbirds are not as vocal – or at least not as noticeable in their singing. However, grackles are easily identified in flight by the long tail of this totally black bird: often the first feature that tells you, “Yup, that’s a grackle!”

March is also the month when we used to watch for the return of tundra swans, formerly called whistling swans. I remember when the many flooded fields during the last few weeks of the month would attract hundreds of tundra swans.

Now, with warmer winter weather, dozens of tundra swans have been seen along Lake Michigan shores during most of the past few months. They do not nest here, but will instead return to breed in far northern Canada.

Sometimes the skies had big flocks of swans flying north and west across Wisconsin. We used to make a regular drive to the Shiocton area to see flooded fields with many duck species and hundreds of swans.

One species that many of us await is the eastern bluebird. Lots of people maintain a bluebird trail and will be checking their nest boxes in March to make sure they’re clean and ready for occupancy. I remember some mild winters had bluebirds back in the county by March 1, but their usual arrival time is March 18-25.

Some less-abundant species such as the killdeer are also seen back here by mid-March. Years ago, there were more of these delightful shorebirds, but habitat loss has affected them as it does so many other species. They can nest wherever there are grassy areas with some gravel edges – the color of killdeer eggs matches stones and gravel.

Many view the American robin as the harbinger of spring. When they migrate into our county, they come through in great numbers and seem to be everywhere. Some robins that nest farther north in Canada may move down here and spend the winter in Door County, however, so it may be a wintering robin that someone sees and thinks the spring migration is on.

Not all birds that arrive here in March stay to nest. One species in that category is the beautiful fox sparrow. It usually arrives by March 20 but sometimes isn’t seen until early April. It stays for a week or two, then moves on to nesting grounds across central Canada.

A native bird that is quite secretive and difficult to find is the American woodcock. It likes to hide in secluded wooded areas and builds a nest on the ground, often under conifer branches. It usually returns by late March and can easily be observed doing its April “sky dance” – a wonderful feature of these small game birds that my late husband, Roy, and I would seek to enjoy every spring.

I’ve been highlighting the many small songbirds that come back in March, but some much larger birds – sandhill cranes and turkey vultures – make their return more noticeable. The bugling calls of the cranes are unmistakable and can be heard from a quarter-mile away.

Turkey vultures can be seen sailing in the sky with their wings held in a V-shaped dihedral, making them easy to identify from a distance. Bald eagles, which are permanent residents, glide with flat wings.

As I write this, a report has come in of the first red-winged blackbird seen on Washington Island. A major influence on the spring migration is strong winds from the south, which help birds fly up here from their winter homes.

The National Oceanic and Atmospheric Administration’s Climate Prediction Center tells us that much of March will be warmer than normal. That means we can get out to enjoy the return of the breeding birds that we miss so much during the quiet, cold days of winter.