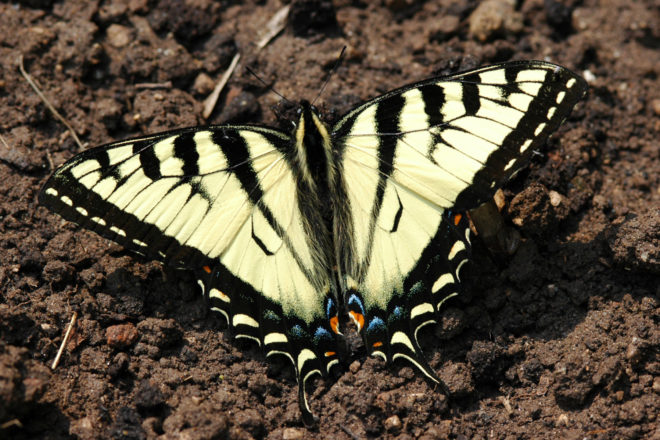 During the past two years, April and May have not been very springlike, with more snow than we expected and very wet, cold weather. In fact, the cherry orchards didn’t bloom until Memorial Day last year — nearly two weeks late.

I’ve been living in an upland maple-beech-hemlock climax forest for the past 37 years and have noticed how spring is changing. My late husband, Roy, and I made daily phenology notes on weather conditions, birds, butterflies, blooming flowers, shrubs and trees. In reviewing these, it appears that the number of nesting birds that return each spring has decreased.

When we lived at The Ridges’ Upper Range Light, the climate was often damp, chilly and foggy in the spring. The year when we began clearing the site where we planned to build our home, we nailed a thermometer on the north side of a large maple tree. On a late April day, it was 60 degrees in the afternoon as we packed up our equipment to go back to the range light in Baileys Harbor. When we drove into the village, we could see the fog rolling in from Lake Michigan, and it was 45 degrees at the range light.

By the first day of spring, robins, red-winged blackbirds, brown-headed cowbirds and grackles often return to yards and feeders. Each year a few American robins are present throughout the winter in the county. The eastern chipmunk is also out of its winter quarters by late March and scampering around under the bird feeders looking for spilled seeds.

If the spring begins on a warm and dry note, we find a few eastern bluebirds returning to their nest boxes before the end of March. The tree swallows usually don’t come back until early April. Two other favorite birds of our area that may return by late March are the American woodcock and the eastern phoebe. It’s been said that the woodcock can eat its body weight in earthworms in one day.

Wildflowers in this higher-level forest are mostly spring ephemerals, meaning they blossom before the canopy of deciduous trees leafs out and shades the woodland floor. The ground is dry and brown after snowmelt and finally turns green as the wild leek leaves burst forth in April. Wild leeks are in the Allium family with onions and garlic. The flavor of the plant is a cross between garlic and onion and is rather potent, so a little goes a long way.

Hepaticas — which come in white, pink, blue and purple — are the first flowers to bloom. Dutchman’s breeches, bellwort, spring beauty, bloodroot, squirrel corn, wood anemone and many species of violets follow the hepaticas.

The real showy plants that decorate the woods by the thousands in the middle of May are the giant trilliums. Their brilliant, white petals light up the woods and carpet the forest floor. As they become fertilized and begin to reach peak bloom, the flowers change to pink before the petals fall.

Sugar maple trees dot the landscape, and the slightly sweet sap begins to flow when daytime temperatures stay above freezing and overnight temperatures go below freezing. This year, friends tapped their first trees on Feb. 29. We’ve seen maple branches in our yard that produced “sapsicles” during a freezing night. Squirrels found them and enjoyed licking or eating them the next morning.

April is the time to enjoy returning sparrows such as the chipping, song, field, swamp and white-throated. The winter-visiting American tree sparrows often linger until late April before heading back to the far north for nesting. One of our favorite sparrows that spends some time here during its trip farther north is the fox sparrow. It can be found scratching and jumping at the edges of the woods in search of seeds and insects hidden in the dried leaves.

The earliest warbler species to arrive in the yard is the yellow-rumped, now referred to by its former name: the myrtle warbler. It’s a hardy bird that’s also usually the last one to leave our area in the fall. Palm warblers and sometimes the pine warbler are also early to return in some years.

Other birds that we can expect to see in April are the yellow-bellied sapsucker, flicker, eastern towhee, winter wren and eastern phoebe, which all breed in Door County. We placed nesting shelves on the sides of our house and garage just under the roof overhang for the phoebes to use. They need mud for their nest foundations, so during a dry spring, we often poured water out of the birdbaths to make muddy areas, which helped the phoebes and robins in their nest-building.

Butterflies will not be out flying until the air temperature reaches 50 degrees, and they prefer sunny days in the early spring. Mourning cloak and Milbert’s tortoiseshell are usually the first ones to be seen. One of my favorites to spot during a sunny, late-April hike in the open woods is the spring azure. Its wingspan is one to one and a half inches wide, and it shows blue only on the top sides of the wings. When at rest with its wings folded, it reveals pale-gray underwings.

Monarch butterflies and the Canadian tiger swallowtail are usually not seen until the middle of or late May, depending on the season’s warmth. The American lady and a few of the angle-wing species are also out in May.

Upland-woods native shrubs that bloom in April are the Canada buffaloberry and moosewood, also known as leatherwood. The flowers are small, delicate and pale yellow, and if you’re not looking for them, you can walk right by without noticing them. They bloom at about the same time that the first garter snake appears out of its winter hibernaculum.

The month of May is when spring really bursts forth with wildflowers and migrating birds. Many people look forward to the returning Baltimore orioles, ruby-throated hummingbirds and other colorful nesting species. Most of the warblers — moving fast and singing distinctive songs — come through by the middle of the month.

This is when knowing the songs of the breeding birds can help you to know where to look for them. It’s also a good time to have your bird feeders and birdbaths cleaned, filled and ready for visitors.

May is the best month to find morel mushrooms. Some black morels appear in late April, but most of the good brown morels are found in May. The best growth conditions involve a very warm spell, followed by rain and then a cooldown.

There is much to enjoy during the last month of spring as the woods come alive with bird songs. The two platform feeders in my front yard become a riot of color when American goldfinch males, in their brilliant yellow plumage, feed next to intensely blue indigo buntings, gorgeous rose-breasted grosbeaks, stunning Baltimore orioles and crimson scarlet tanagers.

We wait all winter for the return of these glorious spring days and the rich sounds and colors that nature provides. Take some time out from your workday to get out to enjoy this special time of year.