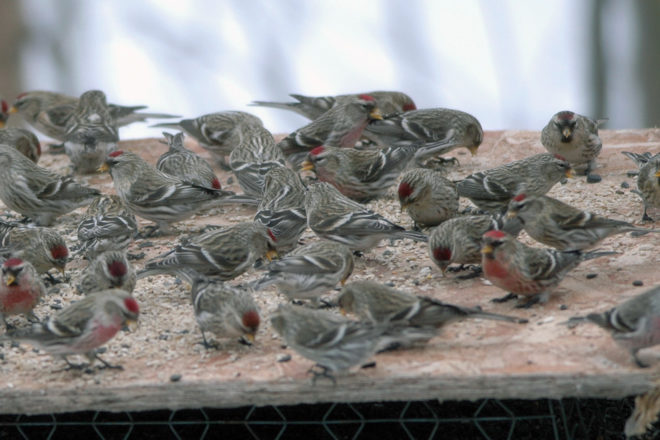 Each day, I place fresh hulled and black oil sunflower seeds on the two platform feeders in my front yard. I also fill a tube feeder with hulled seeds. Soon, hordes of pine siskins and common redpolls descend on the feeders and fight each other for the food. It makes me think of a huge flock of locusts, which can devour fields of grain and other agricultural vegetation in an instant.

The hulled seeds on the platforms are consumed within a few minutes, and then these small, striped fliers are back up in the trees or on the snow-covered ground, looking for any remaining bits and pieces of seeds. This invasion does not happen every winter, but when the food supply for these northern nesters is consumed up in Canada, they move here for sustenance.

Some wild birds are loners and stay away from crowded situations, but siskins and redpolls are communal in nature – at least during the winter at feeding stations. This winter, they are being seen in great numbers in most of Wisconsin, but they’re hard to count because they never hold still in one place. I estimated 60-70 siskins and redpolls here at one time.

These small birds often visit the feeders with American goldfinches. Siskins and goldfinches are both about four and a quarter inches long, and redpolls are five inches. The common redpoll has less streaking on its white stomach than the siskins, which are heavily streaked throughout. Male redpolls have pink breasts.

Redpolls are in the family called Fringillidae (frin-JILL-a-dee), the largest of our bird families. It includes finches, grosbeaks, buntings, sparrows, juncos, siskins, crossbills, towhees and longspurs. Our northern cardinal – many people’s favorite bird – is also in this group.

Redpolls nest in the Arctic regions around the world – they can survive temperatures as low as -65 degrees F – but they migrate south when food supplies or heavy snow make survival difficult. People in Britain, Scandinavian countries and other far-northern sites know this bird well.

One of their favorite foods is the seeds of birch trees. They have a pouch on each side of their throats called a diverticulum that allows them to store seeds. They “stock up” and then fly to a sheltered spot deep in a conifer tree to gradually consume their stored food.

Their nest is in a bush, tree branches or dense tufts of grass, and birch, willow, alder, larch and fir plantations are their favored areas. They breed on our continent across far-northern Canada around Hudson Bay and up to northern Alaska. Winter irruptions occur into the northern parts of the U.S., but rarely in the central part of our country.

One favorite food we have fed in past years is Nyjer thistle seed, but it must be really fresh to appeal to them. I remember one winter of having two mesh sock tubes of the thistle seed and counting 90 redpolls on the socks and on the ground below, eating the seeds all at one time.

This year I’m putting out more hulled sunflower seeds in a tube feeder and scattered on two platform feeders. They seem to enjoy these as much as the thistle seeds. Door County’s last date for these far-northern visitors has ranged from March 5 to May 21.

Pine siskins have nested in Wisconsin, mostly in far-northern counties. The first five years of work on the Atlas of Breeding Birds in Wisconsin showed a few nesting siskins in southeastern parts of the state. The residential sites had good supplemental feeder stations and conifer plantations.

There have been suspected nesting siskins in the Baileys Harbor area, but these were not confirmed. It seemed that during years of great winter colonies of visiting pine siskins, some remained into June and were suspected breeders.

The nesting records of siskins are so infrequent that regular activity has been difficult to document. Even in the far-northern counties where they appear more frequently, they appear to be difficult to certify. These birds don’t have the breeding-site fidelity that other species do.

The first confirmed nesting of siskins was in 1948 in Iron County, but the regular summer occurrences of siskins in northern Wisconsin weren’t established until the 1960s. These birds are opportunists: They take advantage of abundant food and then move on.

Those of us who enjoy wild birds at our feeders fill the winter days with their high, twittering calls and the redpolls’ flashy, red foreheads. Common redpolls may not be back here next winter, so appreciate their enthusiastic nature while you can.